6 Reasons the Chiefs Will Beat Pittsburgh

Home Field, Health, and Being Hella Fast Add Up 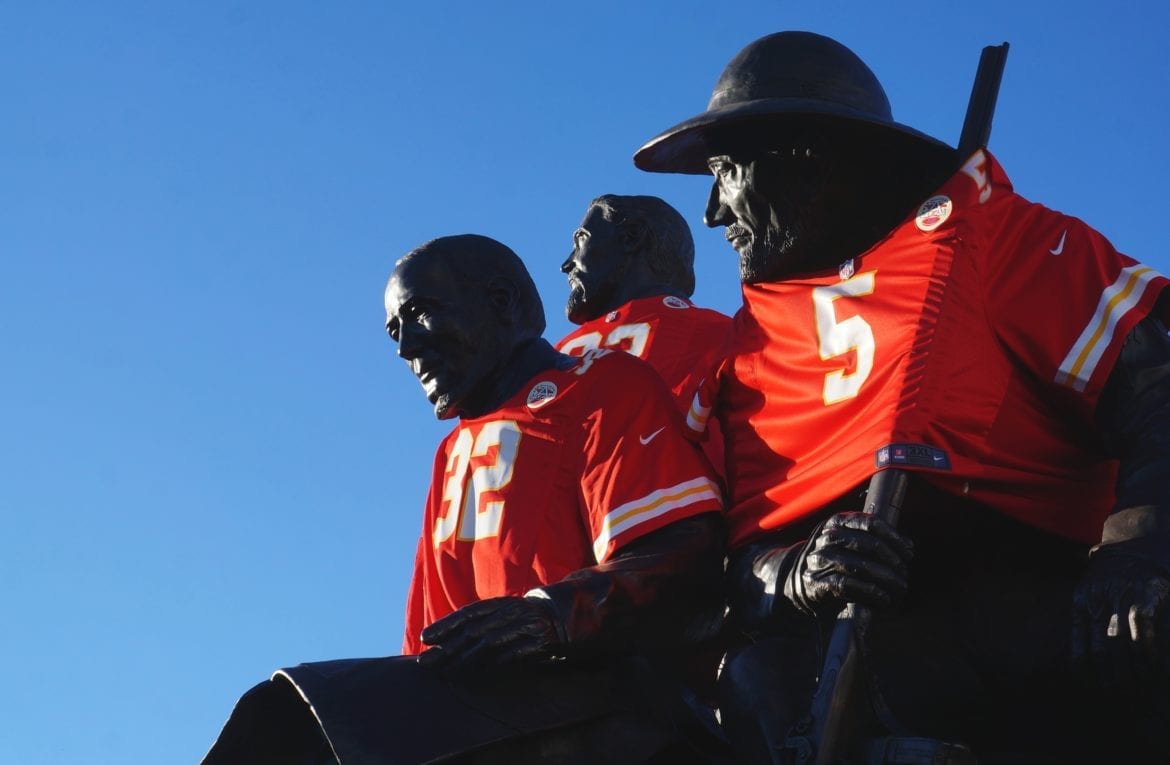 Pioneer Square Monument, at the intersection of Broadway and Westport Road, is dressed in Chiefs attire in preparation for Sunday's game. (Hampton Stevens | Flatland)
Share this story

Sunday, the Kansas City Chiefs will meet the Pittsburgh Steelers in the divisional round of the NFL playoffs. The game could be a huge step for the Chiefs. If KC wins, it will be their second straight season with a playoff victory and their first home playoff win since 1994, back when the quarterback was a guy named Joe. That ’94 game, not for nothing, was also against the Steelers. If you’re hoping to see a sequel on Sunday, we’ve got a few reasons to feel good about the Chiefs’ chances.

1. The Steelers Can’t Stop The Run

Long gone are the days when Pittsburgh played an old school 3-4 defense. Earlier this year, when the Steelers trounced KC in week four, Pittsburgh played “nickel” style defenses about 85 percent of the time, using as few as two down linemen and as many as six defensive backs. Focusing so intensely on the pass, however, inevitably means giving up yards on the ground, which they do. Pittsburgh surrendered an average of 4.3 yards per carry in the regular season. That’s good news for the guys in red, who have had trouble establishing a solid running game all year.

Unfortunately, KC hasn’t been so good against the run, either. The team allowed 121.1 rushing yards per game this season, 26th in the league, and their 4.4 yards per carry ranked them No. 24. Part of that is also due to scheme. Like the Steelers, the Chiefs’ defensive coordinator Bob Sutton emphasizes stopping the pass. Part of it, though, is due to a rash of injuries to linebackers, especially stalwart Derrick Johnson. That could be a big problem, especially since Steelers’ running back Le’Veon Bell has been a beast all season, averaging 158.3 total yards per game. His catching ability and unusual running style, with lots of hesitations, slashes and stutter-steps, makes him a special challenge. Solid, fundamental tackling by KC’s defensive backs will be crucial.

The dynamic rookie, a combination return man/wide receiver/running back, is the fastest man in the NFL, having exceeded 22 mph several times this season, according to Next Gen Stats. He’s been on a roll lately, too. With a Week 17 punt return against the Chargers, Hill became the first rookie in NFL history to score a touchdown of 65 or more yards in four consecutive games. He’s got a good chance to make that five straight, too. The Steelers’ kick coverage has been crappy all year. That was evident last Sunday in their AFC wildcard game against Miami, when the Dolphins returned four kicks for 119 yards, including returns of 58 and 33 yards.

Yes, his legs help. Last season, Smith ran for a total 498 yards. This year he ran for only 67 yards through the Chiefs first 14 games. In the last two games, though, Smith equaled that total, including this touchdown run against the Chargers. That’s an extraordinary threat.

The speed that really matters though, is how quickly Smith gets rid of the ball. According to Pro Football Focus, Kansas City’s offensive line allowed only 124 total pressures this season – a league low. Part of that success is due to the O-line’s relative health and continuity. But a big factor is how quickly Smith does his job. KC’s West Coast offense is predicated on quick reads and throws, and nobody does it better than Smith. He averaged just 2.38 seconds from snap to throw this season, the fastest starting quarterback in the league.

4. The Chiefs are (Relatively) Healthy

Other than linebackers Dadi Nicolas and the aforementioned Johnson, the Chiefs come into the game remarkably healthy. That includes the return of linebacker Justin Houston. At his best, Houston is virtually unstoppable and can singlehandedly alter the course of a game. The return of running back Spencer Ware will also be big. (See above, re: establishing the run.) 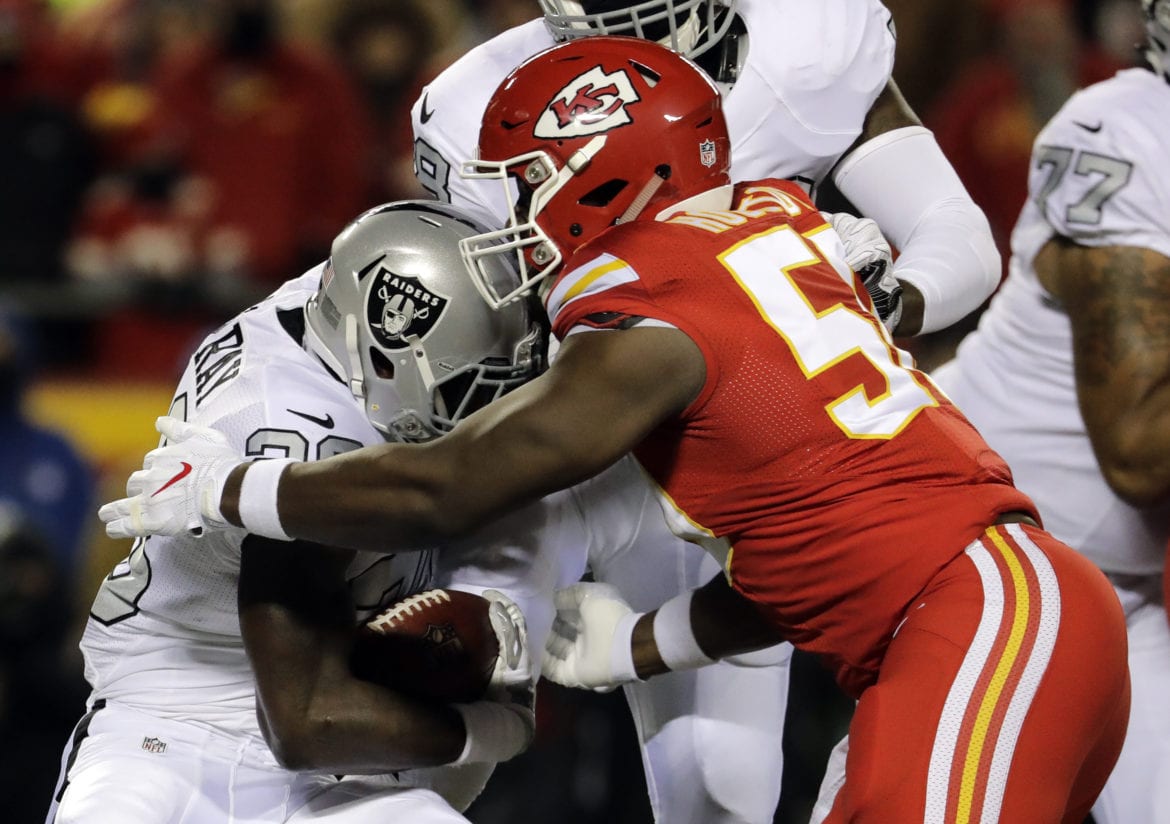 Head coach Andy Reid’s play-calling has been fantastic, especially in the season’s second half. He’s famously good coming off a bye-week, including regular and postseason games, both here and when he coached in Philadelphia. Reid is 19-2 with an extra week to prepare for an opponent.

Sunday, he should unleash a blizzard of so-called “trick plays,” with lots of fakes and misdirection. They particularly like to line up Hill as a wide-receiver, then bring him sprinting through the backfield to fake an end-around. We may even see more Dontari Poe on offense.

Maybe the most encouraging thing about the Chiefs’ offense, though, is the improvement of down-field blocking. Watch the blocks by Demetrius Harris, Mitchell Schwartz and Jeremy Maclin on this Travis Kelce touchdown against Denver. That’s the kind of teamwork that turns five-yard gains into touchdowns.

Weather could be a factor. The forecast calls for freezing rain, which could favor the Steelers’ ground-heavy attack over KC’s pass-first offense. That said, any bookie will tell you that home-field advantage in an average NFL game is generally worth about three points. Sunday’s tilt, though, is no average game and Arrowhead is no ordinary venue. Sunday, the Loudest Stadium on Earth should be worth four points. Figure the Chiefs to need ’em in a 24-20 win.