A Ritual to Remember 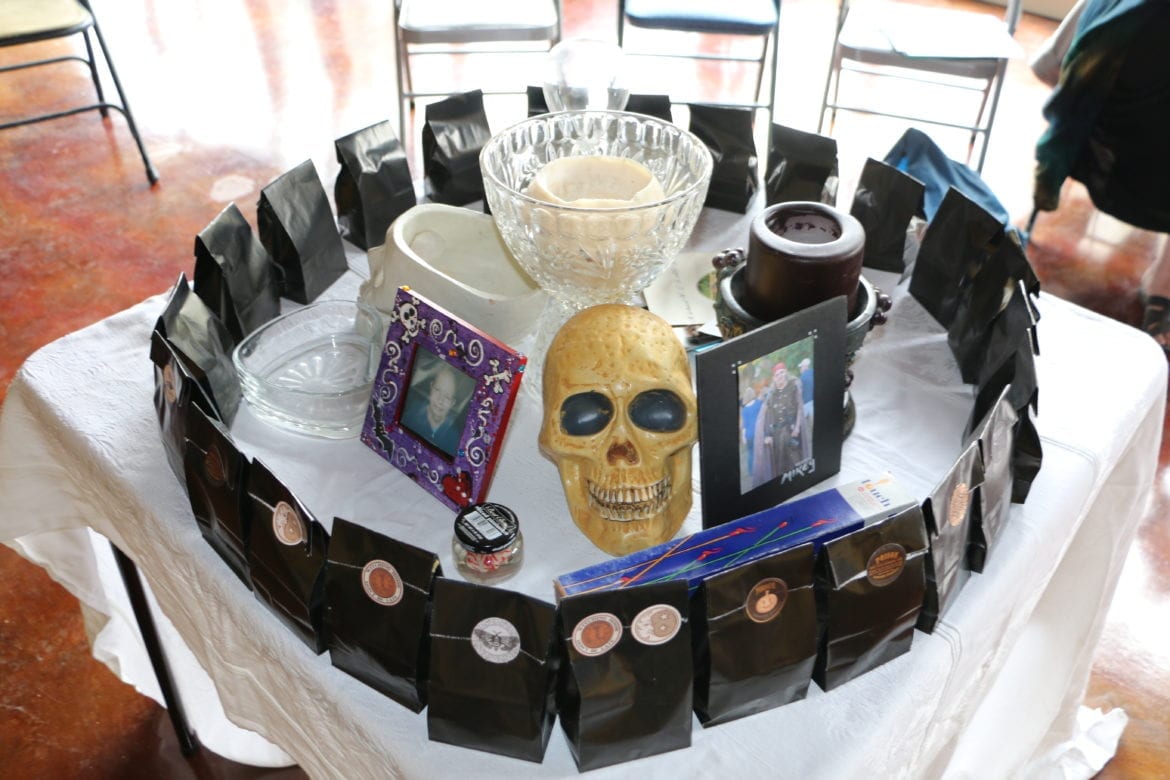 Samhain, the Pagan new year and harvest holiday, is celebrated in the fall. (Photo: Kelly Cordingley | Flatland)
Share this story

It will be fun and games for the costumed ghosts and goblins tonight, but it was a much more solemn affair this past weekend for the Boyce family. From a dark floral scarf and black and red roses decorating an empty chair, to the black tablecloth and dishes, the dinner was a quiet remembrance and invitation for their beloved dead to join them, even if temporarily.

Two candles, representing the material world and the afterlife, flickered through the dim lights — as parents Linda and John, and their children, Christopher and Elizabeth, each welcomed a visitor from the dead to their home in old Overland Park.

John invited his aunt, Christopher invited his cousin, Elizabeth invited a past family dog, and Linda invited her mother, who died last November.

They followed up a silent dinner with a trip to the backyard with the beloved dead’s plate of food, which they left out overnight as an offering to nature. Finally, the family sat around a fire pit and shared stories of those who had passed on to the afterlife.

The Saturday night ceremony was a celebration of the Pagan holiday, Samhain, which marks a time of joy and sadness when members of the faith believe the veil between the material world and the afterlife is the thinnest. It is also a harvest holiday, and the dinner menu included pumpkin bread and apple cider.

“As you remember a person, some part of their spirit is still here with you,” John said. “And if their spirit is with you, how can you be sad? As long as we have those connections, then the memories aren’t completely gone.”

Paganism, often misunderstood or mistaken for Satanism, refers to any religion that isn’t the five major world religions. It is also a religion deeply rooted in nature and the environment.

John and Linda believe in karma and reincarnation, as many Pagans do.

When a soul passes on, they believe it goes to rest in a place called Summerland. Linda said each soul is on Earth to learn different lessons, so it will return to continue that process. As for karma, they believe that any punishment perpetrated on Earth is amplified three-fold, and it may be in this life or another.

The idea of a Summerland and karma are not unique to Paganism.

“I have a friend who taught me we’re all headed to the same mountain peak, just taking different paths, but you may see some of the same trees on the path,” Linda said. “Human beings as a species have certain things we hold in common.”

Linda and John met through Paganism at the University of Kansas, but relationships took them in separate directions, with John adopting the faith because it “fit what I saw as a description of right and wrong, honor and dignity, and treating all other people the same way you want to be treated.”

After Linda’s divorce, the two met again, both having reached the same spiritual destination.

About 20 years ago, they married in a Pagan ceremony in which they were “handfasted,” where a couple marries for a year and a day before deciding to make it permanent. Linda and John knew they didn’t want to wait.

With a broom, the two traced a circle around themselves to represent sweeping out the old and making room for the new. Then they jumped over the broom.

While the Boyces are proud Pagans, stereotypes lead some members to shy away from sharing their faith. While the Boyces haven’t experienced violence like some of their friends, they do get their fair share of questions.

“I remember when I told my mom I was Pagan,” Linda said. “She looked at me, and the first question she had was, ‘You’re not going to eat my dog, right?’ I was like, ‘No! Of course not.’ She was in her 60s at that time and had watched too much ‘Jerry Springer’.”

Other misunderstandings they hear revolve around the pentagram and Satanism.

The pentagram, Linda explained, is simply a five-pointed star that represents earth, air, fire, water and spirit. The symbol is known as a pentacle when inside a circle, which represents protection. Much like a Christian might wear a cross around his or her neck, many Pagans wear pentacles around theirs.

The Boyces said most Pagans think Satanism is simply an anti-denomination of Christianity.

“It’s very upsetting when I hear someone had to take off their pentacle because it’s a sign of the devil,” Linda said. “No. Pagans don’t believe in the devil because it’s a Christian entity.”

The Boyces found their Pagan community in Gaia Community Unitarian Universalist Congregation. They joined when their son was young to expose him to like-minded children. Gaia Community, at 4327 Troost Ave. in Kansas City, is an nature-based Pagan congregation.

On Sunday, about two dozen people congregated in the lobby of Gaia, many clutching photos of a deceased loved one. In the center sat an altar of candles, photos and small bags for each member, filled with candies and a spiritual phrase on a scroll.

A woman dips her hands in blessed salt water during the celebration of Samhain, the Pagan new year and harvest holiday.

Members are invited to place photos of their deceased loved ones on an altar at Gaia Community during its Sunday celebration of Samhain, the Pagan new year and harvest holiday.

Bags filled with candy and scrolls of inspirational messages were handed out to attendees of the fall celebration.

Jamie Peters, a ritualist at Gaia Community, reads passages to the congregation from a book of passages.

The two ritualists, who led the ceremony, wore black-and-white robes and called members to remember those who have passed and to focus on their inner selves.

Then, members proceeded in silence to the dining room. A large black altar with a pentacle and other decorations sat in the front of the room, and members placed their photos and mementos on it.

The Boyces are Eclectic Pagans, a type that John said is unafraid to consider different religious choices and allows space for various sects to come together to find the divine.

The divine for Pagans can mean a variety of things. For Linda and John’s family, they believe in a deity that has masculine and feminine traits and are referred to as God and Goddess or Lord and Lady. Other Pagans view the male and female gods as being separate.

When their son was 16, he became interested in a Christian church in Johnson County. They attended services with him until they heard rumors he church was against same-sex couples. While they told Chris they weren’t going to attend anymore, they gave him the option to do so if he chose. He didn’t.

“We’ve raised Chris and Liz as Pagans, but as humans first,” Linda said.

Elizabeth attends Barstow Academy, a private school that has many international students. She said her friends don’t bat an eye at her religion and accept that hers is just one of many that may be different from their own.

Inside KC’s Creepiest Haunts: The Other Side of the Scare

Enter if You Dare

Great Pumpkins Keep Family Traditions Alive, Even Through A Pandemic

How to Trick-or-Treat Safely This Halloween

2020 Is Scary Enough Without Taking Chances

Touring Epicenters of Melancholy for Fun and Money

The (Not Necessarily) Halloween Edition