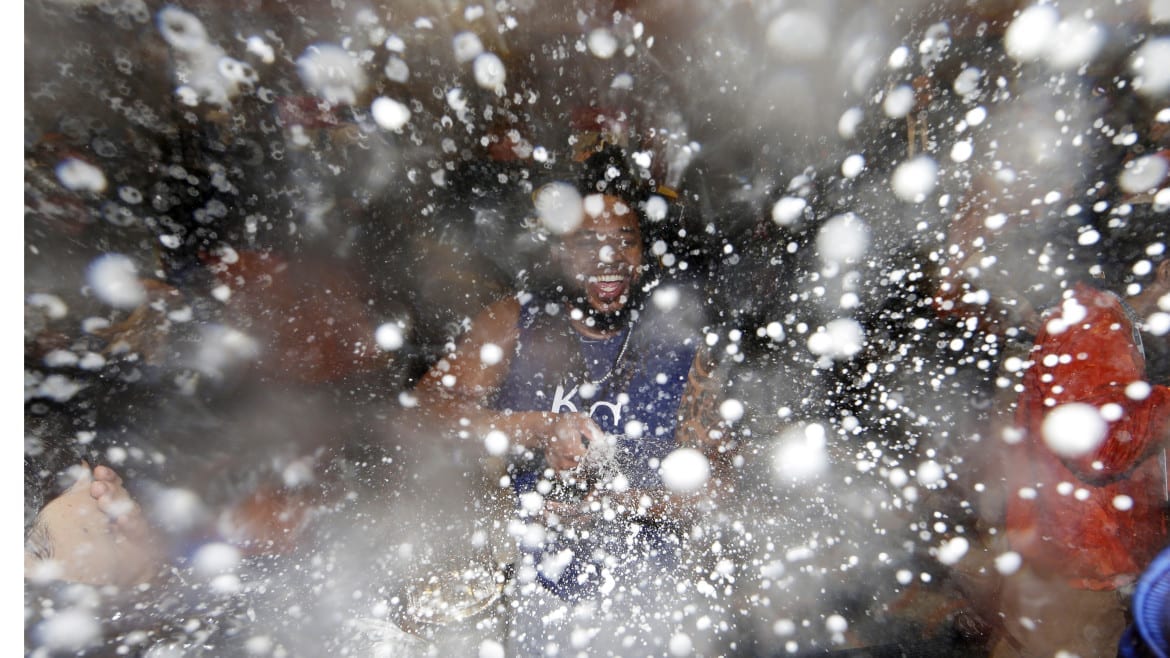 Love conquers all things, so we too shall yield to love.

The Royals are the most beautiful thing I have ever seen. I’ve been to the Louvre, seen a sunrise over the Grand Canyon, and witnessed things involving Angie Everhart and a bedsheet that can’t be mentioned on a family website. But I’ve never seen anything as gorgeous as the world champion Kansas City Royals.

The 2015 season, from first pitch to final out, was a symphony of grace, grit, and passion. We will not see its like again. Sure, the club will have more good years. They may win more championships. But we will never again see a run so thrilling and beautiful, so fervently wished, so wildly improbable, and yet somehow so seemingly preordained. We will never again get to see our 30-year-old dream come true.

The on-field greatness of this club was something fans recognized all year, even if our trademark Midwestern modesty didn’t quite let us admit it out loud. They played a ferocious, innovative, dynamic brand of baseball, and they played with a joy and energy that’s otherwise virtually nonexistent in modern pro sports.

In the batter’s box, they were ruthless, with a plate discipline rarely seen in this era of everyone-swing-for-the-fences. On defense, they were historically elite (Alex Rios notwithstanding), making play after nearly impossible play. On the basepaths, they used brilliant scouting and blazing speed to exploit the subtleties of the game. It was absolutely relentless, savage in the best possible way, and sometimes looked like opponents were trying to hold back the tide.

Then, in the postseason, they got hot.

We know the numbers by now. The Royals came from behind to win eight times in the postseason, seven of those being multi-run deficits. They came back in all four of their World Series wins. In three of those, they trailed in the eighth inning. In two, they tied the game in their final at-bat.

You could at least make an argument that they’re the best postseason team of all-time. Joe Buck called KC the best he’s ever seen. At least for the duration of their brilliant postseason run — for these past, few, glorious, stunning, nerve-wracking, impossibly crazy and electrifying weeks— the Royals played baseball about as good as it’s ever been played.

All that, however, speaks to how the team won. Let’s consider why they won. The answer, oversimplified, is found in one word, and it’s the most important word in the universe. That word is love. These 25 players, and the organization around them, clearly and openly love each other, and will tell anybody who will listen that love is the key to their success.

Dayton Moore, and the organization he rebuilt from the ground up, didn’t just go after talent. The club sought humanity. From players and coaches to scouts and front-office people, the Royals rebuilt with people who are not only good at their jobs, but good human beings.

They had to build that way. Talent alone will not win a small-market team the best record in the American League. Talent by itself will not suffice when you are facing a 6-2 deficit in an ALDS elimination game. To win it all when all seems lost, players and coaches must believe implicitly in themselves, in each other, in the organization, and the city behind them.

By seeking love first, Moore built a team where people care about each other and the city for which they play. It’s simply been dazzling to see. Teams in this big-money, free-agent era aren’t supposed to be so connected, to each other and their fans. That just doesn’t happen. To watch those relationships grow and bear fruit with a championship is the most gratifying experience a fan could have.

That, ultimately, is what makes this victory so beautiful. This team expresses something profound; an idea that speaks to the very core of the human experience.

People will tell you that sports don’t matter. They will claim that the doings of well-paid young men on a grass field cannot possibly have an impact on the so-called real world. Certainly, in a sports-mad society, where big money colors everything, it’s easy to lose faith in the power of sports to inspire.

For those who follow them, though, this Royals team has revived our faith in that power. In the deepest sense, melodramatic as it sounds, this club has revived our faith in the world itself. That’s because the Royals are a testament to an incredibly important idea — perhaps the most important idea that our species has ever come up with. Call it Capra-like or Disney-esque, this team proved that character counts and community matters. They showed that hard work, optimism, selflessness, and simply being a decent human being really will help make your dreams come true.

The Royals, to phrase it in the simplest (and sappiest) possible way, proved that love can conquer all. Nothing could be more beautiful than that.