Lawrence’s LK Ultra Ushers in a New Generation of Punk 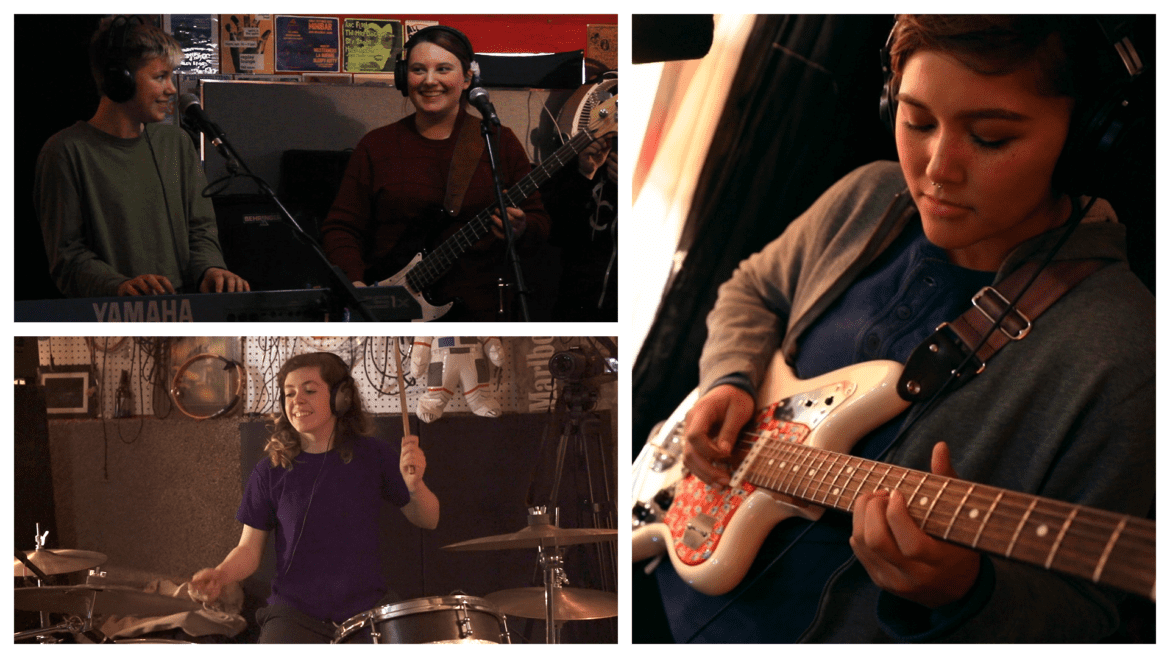 LK Ultra stands to be one of the most punk bands in Lawrence, Kansas. (Cody Boston | Flatland)
Share this story

LK Ultra is the most punk band in Lawrence, Kansas.

But when it comes to the core principles that make a punk band punk, LK Ultra checks nearly every box.

Their Instagram bio describes LK Ultra as an “indigenous-fronted queer indie rock band.” After catching them live and hanging out for about an hour recently, it was clear the scrappy band of teens is already far more than its intersections.

As I met with the band and we settled into the graffiti-covered seating area of the Java Break at 17 E. Seventh St. in Lawrence, keyboard player August Hyde recounted the first act of rebellion that led to the band’s formation.

All four members of the band have known each other since that first year of attending the camp put on by Girls Rock — a Lawrence nonprofit aimed at educating and inspiring girls and transgender youth through music. They only joined forces as LK Ultra during last year’s camp, and Hyde joined the group shortly after camp ended and the band’s former keyboard player had left the band.

Given only a few minutes to choose a name during camp, the group did some Wikipedia browsing and decided on MK Ultra — and later, LK Ultra — after reading how the secretive CIA program had inspired the Netflix blockbuster “Stranger Things.”

Today, in addition to their camp counselors at Girls Rock, another person the band can look to for advice and encouragement is bassist Lily Pryor’s dad, Matt Pryor, of The Get Up Kids — or as Hyde jokingly refers to him, “the man who created emo.”

“[He’s helped] us rationalize what actually happened [at shows] instead of [letting us become] overwhelmed by our emotions,” Lily said.

Band members say he’s always in the front row singing along during gigs. Lily also takes credit for introducing her dad to the music of Remember Sports, who The Get Up Kids took on the band’s fall tour.

Once camp ended and in a moment that could only be described as #UnmistakablyLawrence, one disgruntled social media user urged the band to change its name, complaining it needed to be more original in order to participate in the University of Kansas radio station KJHK’s Farmers’ Ball.

“Our moms came in clutch,” Hyde says of the Facebook exchange that took place over the band name. Foreseeing future issues with the name, they changed it to LK Ultra (for Lawrence, Kansas).

The band laughed off the name debacle, but a far uglier obstacle was waiting for them upon actually performing at the Farmers’ Ball semi-finals at the Bottleneck in April. Ten minutes before their set, a venue employee allegedly harassed Hyde, a transgender man, over his use of the men’s restroom. The band later said in a Facebook post that the situation escalated to the point of the employee screaming and acting aggressively towards them and even their parents.

The venue’s general manager, as well as representatives from KJHK and Student Union Activities at KU, all spoke with the band and issued apologies.

Bottleneck General Manager Michael Dye said in his own Facebook post that he and his staff had pledged to “work together with the community to make The Bottleneck a safe place for all ages, gender identities, races, creeds and sexual orientations. This includes new staff training, as well as creating a safe, gender-neutral bathroom for our patrons.”

“It was really bad,” Hyde said. “I’ll see people who look like the guy who shouted at us, and it’s still really difficult for me. And going into the Bottleneck, whenever I walk past the places that were the epicenter of the altercation, I feel really uncomfortable. The feeling is lessening as I go to more fun things at the Bottleneck, but the feeling is still there.”

The band soldiered through this altercation and immediately hit the stage with smiles on their faces — later winning one of the Battle of the Bands Tournament’s top prizes, which may be the greatest local music feat of 2018.

“People are like, ‘Oh, well, it must’ve been worth it, because now you have a bunch of fans and a lot of publicity over it,’” guitarist and singer Inez Robinson said. “The reality is I would’ve rather not gone through a traumatic event. You know, $500 [in prize money] and a lot of publicity doesn’t even matter.”

A little about us: We’re trans, we’re femme, we’re Indigenous, we’re gay, we’re (mostly) in high school. We’re DIY and advocate for safe all ages spaces that respect intersections like us. We’re 10% band, 40% activists, and 50% best friends. Thanks for supporting us y’all. 💖 pic.twitter.com/doHQF9w5Yk

Although the band still sees the Bottleneck and other venues in town as “cis (a person whose sex assigned at birth matches their gender identity), white guy-dominated spaces,” they’ve been glad to witness some of those venues starting to offer gender-neutral and trans-inclusive restrooms. But, as evidenced by other experiences before and after Farmers’ Ball, there’s still plenty of progress to be made in making live music safer and more accessible to everyone.

Robinson described years of attending friends’ shows and enduring unwelcome experiences. Their bandmates jumped in to emphasize the importance of all-ages venues.

“A lot of our friends come to our shows, and they’re all our age or younger,” Pryor said. “For me, those are the main people we play for, because they enjoy our music a lot, and having them not there seems like, ‘Why are we even playing this show if nobody’s going to enjoy it?’”

One place they don’t have to worry about bringing family members that deal with alcoholism or their friends who are underage, or they just want to evade “drunk old men staring at [them] from the bar,” is the White Schoolhouse.

Lawrence’s new DIY stronghold sits to the north, across the Kansas River, in a building that’s been turned from a schoolhouse, to a wedding venue, to — at least a couple times a month — an all-ages concert spot, run almost entirely by and for the musicians it hosts. LK Ultra has played at the White Schoolhouse multiple times and is headlining a show there in January to raise funds for a permanent sound system at the venue.

What can you expect from the band live? Before you hear any music, you’ll probably hear them laughing. Given how much fun they have together on stage, it was surprising to learn they weren’t all childhood friends.

Once the music starts, you’re in for about 20 minutes of upbeat, irresistibly danceable indie rock that includes takedowns of transphobes, racists and presumptuous college bros, but also details the more introspective elements of the band members’ lives.

While “Pussy Hat” sets its sights on the often unchecked toxicity of TERFs (trans-exclusionary radical feminists), “Two Spirit” reckons with Robinson’s challenge of discussing their gender with their family, referencing a Native American term for gender nonconformity.

“Those are feelings that I did have that I couldn’t [talk about with] my mom, [and] still can’t,” Robinson said. “But when I can play it as a dance-y song, I can say it to a whole group of people.”

Robinson’s mom sings along to “Two Spirit” when she attends the band’s shows, and a lot of LK Ultra’s transgender fans will cry when “Two Spirit” is performed. Bandmate Hyde used to sing the high harmonies on the song, but he has recently been singing the low harmonies due to his hormone treatments. He says he thinks the low harmonies don’t sound as pleasant, but Robinson disagrees.

If all of this sounds emotionally exhausting, that’s because it is. Thankfully, LK Ultra learned from Girls Rock the value of a group “cooldown” and often utilize skills learned in therapy when they deal with conflicts within the band.

“If I didn’t love these guys, I wouldn’t be in the band, because it wouldn’t be fun,” Hyde said. “It’s such an important thing that we’re having a good time, and there’s no way to have a good time if you’re not communicating and on the same page about things.”

Next up for the band is the studio. An attempt at recording back in September was less than fruitful, so they’ll soon find a friend to do the production work, hunker down, and hopefully emerge this coming spring with a full release. Until then, they’ll be playing more shows, helping their fans laugh through tears, and showing Lawrence, Kansas, what a utopian rock band sounds like.

Aaron Rhodes is a music journalist based in Kansas City, Missouri. He is the editor-in-chief of Shuttlecock Music Magazine and has contributed to The Pitch and Flatland.