When Elmwood Cemetery opened 150 years ago this month, it was difficult to discern which was the bigger story.

There was the 43-acre pastoral Eden scheduled to be “formally consecrated to the use of the dead,” according to an article published by The Kansas City Times, which further described how the burying ground included “a beautiful clear babbling brook … fed by numerous springs of everlasting clear water…”

But there also was the distance that the dead would be removed from the living. 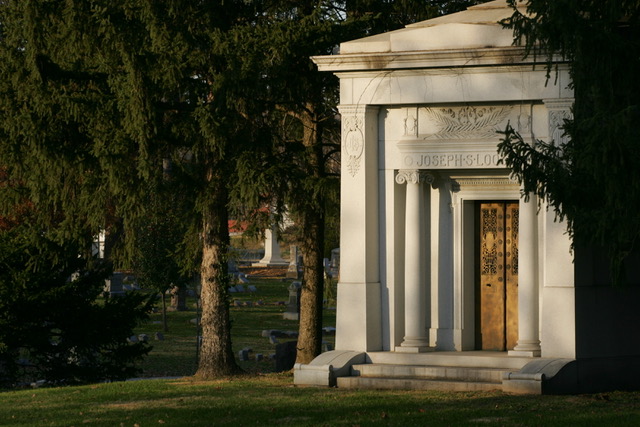 Elmwood Cemetery’s 150th anniversary will be celebrated from 11 a.m. to 3 p.m. Saturday, Oct. 1, at the cemetery at 4900 E. Truman Road. Parking can be found either on the grounds or the nearby Guadalupe Centers Charter Schools at 5201 E. Truman Road. Admission is free. For more information, go to elmwoodcemeterykc.org.

The Times reporter noted the “pleasant drive on the best road leading out of Kansas City,” taking mourners all the way out to what is now 4900 E. Truman Road.

“Back then, this was out in the country,” said Alison Paddock, board member of the Elmwood Cemetery Society, the nonprofit that administers the site.

This Saturday society officials have scheduled a celebration to mark the cemetery’s 150th anniversary, featuring attractions not normally associated with cemeteries, such as three bands and two food trucks.

None of them, they say, will create any odd juxtaposition with the close proximity of more than 30,000 graves.

“Back when Elmwood was started, families would gather at cemeteries,” Paddock said. “They would come and picnic here and tend the family gravesite.

“We would like Elmwood to return to that — a place where people can run, take a walk, and bring their family to look at the gravestones and consider all the history associated with them.”

Such recreational choices suggest a post-Civil War moment when cemeteries were regarded as rare places of respite, before the rise of public parks across the country. The era predates by about 25 years the proposal by Kansas City’s parks board to enact a property tax financing what would become an acclaimed parks and boulevard plan.

Elmwood Cemetery is identified in its National Register of Historic Places nomination form as “Kansas City’s first rural cemetery,” an example of the movement that occurred across the East Coast during the 1830s.

That’s when growing communities, whose founders often had designated specific burying grounds near churches or public squares, had to confront what happened when those facilities began filling up, sometimes with ghastly results.

In Kansas City that reality had played out on the single square city block near Locust Street and Independence Avenue, which in the community’s 1847 platting had been designated as its first burial ground.

Not long after the opening of Elmwood, the city sought to vacate the crowded cemetery and turn it into the city’s first park.

City crews graded the property, pulling up bones in the process and then removing them to Union Cemetery, established in 1857. This nod to public sanitation also had the effect of removing the dead from daily life.

The 1872 opening of Elmwood further confirmed that transition in Kansas City.

But Elmwood would not only be a carriage ride away — it also would be transporting, taking its name from the trees specific to the site. Upon arrival, visitors could follow walking paths that wandered and circled back, in contrast to the grid of city streets beyond the cemetery boundaries.

And, over subsequent decades, thousands of grave monuments would be installed, some incorporating angels, others featuring representations of lilies or cypress trees with branches reaching upward.

“Under the sway of 19th-century romanticism, what people could not avoid, they made beautiful,” wrote art curator Naomi R. Remes in the Elmwood nomination submission.

The pastoral setting described by the Times in 1872 grew more so some 25 years later when George Kessler, a famed landscape architect, put his personal touch on the property. That included, according to the same nomination form, some $100,000 worth of upgrades such as grading, new trees and shrubs, and a 600-foot stone culvert.

Such an investment had to be protected.

In 1896 some of the Kansas City business operators who had purchased lots in the cemetery — among them mining magnate August Meyer, an early head of the Kansas City parks board — began to grow concerned that those who operated the facility might lose interest in it once it began to fill up.

In response, they acquired the property and arranged its incorporation as a benevolent institution under Missouri law.

Enter Kessler, hired by the park board in 1893.

He left his mark on Elmwood during the same era he was designing Kansas City’s parks and boulevard plan, as well as preparing Forest Park in St. Louis for the 1904 World’s Fair. Several small lakes depicted in an 1872 Elmwood map do not exist today. It’s possible that Kessler had them removed, said Paul Benson, society treasurer and for 26 years a conservator of objects at the Nelson-Atkins Museum of Art.

Today the graves of park board leader Meyer and his peers are highly visible at Elmwood, especially the Kirkland B. Armour Memorial Chapel, built by the meatpacking mogul’s widow Annie after her husband’s 1901 death.

Although Saturday’s event is free, Paddock hopes visitors consider donating to the cost of making an Armour chapel restroom compliant with the Americans with Disabilities Act. Society members hope to raise $35,000 to $45,000 to meet a matching grant.

“People ask us, ‘Is that the same Armour that Armour Boulevard is named for?’ said Paddock.

“We want to take back the lost history that is here at Elmwood,” added Benson.

“A lot of these individuals have been forgotten.”

Many of the first remains placed at the cemetery belonged to members of Congregation B’nai Jehudah, Kansas City’s first Jewish religious organization. Its officers purchased two acres in the new cemetery’s southwest corner in 1872, and by that November, the remains of 32 individuals had been transferred there.

The family of William F. Davis, who in 1874 became the first Black Kansas City police officer, buried his body at Elmwood following his 1891 death.

On his “plot card,” pulled from the cemetery office files, there is no mention of his race.

“He has a really prominent position, right inside what used to be the front gate back,” Benson said.

There, members of the Kansas City Police Historical Society designated a memorial stone in 2005.

If everyone interred in Elmwood wanted to be remembered, some had more means than others.

One private mausoleum holds the remains of Jacob Loose, Kansas City biscuit king, as well as his wife, Ella.

Several times a year floral tributes are placed there, representing the continuing fulfillment of directives arranged by a trust filed decades ago.

“Usually the delivery people don’t even need to check at the office, they just know where to place them,” Paddock said.

Alternately, many graves in Elmwood remain unmarked, including those of many children. In recent years history students at Bishop Miege High School have adopted those cemetery sections, cleaning them and in some cases raising funds for stones to mark individual graves.

Other long-unmarked gravesites have received monuments in recent years, perhaps because of the growing popularity of genealogy.

One example is the grave of Charles Ernest Appy, a 19th century European violinist and cellist.

“He had played for royalty and had come to the United States in 1894,” said Benson. Shortly after opening a music school in Kansas City and bringing his wife and several children from Europe, Appy died in 1895.

His grave remained unmarked until 2013 when a descendant contacted the cemetery asking whether a photo could be taken of Appy’s gravestone.

The descendant paid for the monument in installments, Benson said, and today Elmwood visitors can find Appy’s grave monument, bearing the outline of a violin, and also read details of the musician’s association with composers Franz Liszt and Hector Berlioz on the Elmwood website.

This World and the Next

In recent years Elmwood has been the site of public expressions of sorrow and civility.

In 2013 a resident living near Elmwood shot and killed Ella, a deer who had been Elmwood’s one permanent resident since her birth there two years before.

During her brief life Ella — named for Ella Loose — had charmed cemetery visitors by sometimes following them at a distance or lingering just outside of the Armour chapel during ceremonies.

“Her mother had been hit by a car out on Truman Road,” Paddock said.

“Ella never left the cemetery. She was tame.”

The shooter told investigators he had no idea of Ella’s status and had just wanted to feed his family.

Authorities charged him with taking a deer out of season, a misdemeanor. Elmwood society officials had Ella cremated, interring her remains in her own plot. More than 100 admirers attended her memorial service, placing flowers at her donated gravestone.

A few years later vandals defiled the mausoleum of the Huling family, taking the casket of Emma Huling, who had died in 1865 at age 10 months and whose family had placed her at Elmwood at some point after its 1872 opening.

The grave robbers abandoned Emma’s casket some 50 yards away, where cemetery workers and volunteers later discovered it. Among those responding to the outrage were representatives of Speaks Chapels in Independence and the Jackson County Medical Examiner’s office, all of whom attended a ceremony in the Armour chapel preceding the re-interment of Emma’s remains in a new white casket.

“There are people who don’t have any reverence for what has gone before,” Paddock said.

In this way the cemetery remains active in this world as well as the next.

The cemetery society is a member of the Truman Road Community Improvement District, which meets monthly.

On Saturday, Oct. 29, KC Crew, the adult recreational sports league and events company, will host the annual Graveyard 5K. Society officials first organized the Halloween season event in the early 2000s and no one has accused it of being in poor taste, Benson said.

“We didn’t hear from a single person who thought it was inappropriate,” Benson said.

Flatland contributor Brian Burnes is a Kansas City area writer and author. He is serving as president of the Jackson County Historical Society.