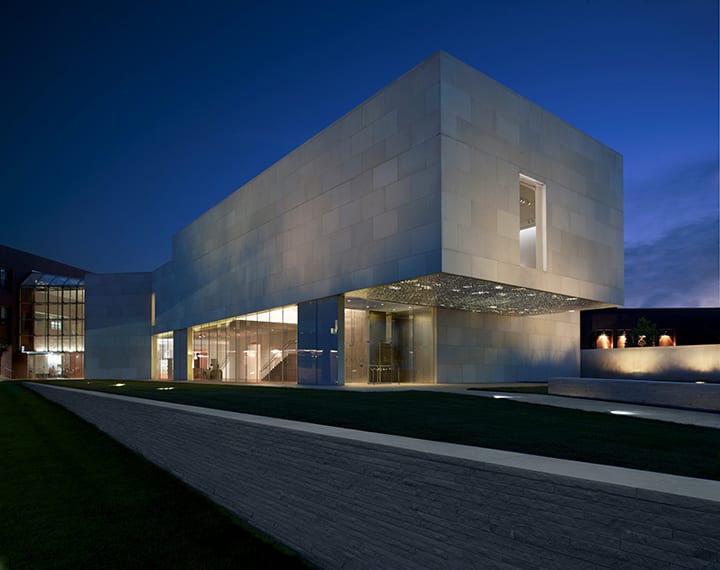 Kansas City’s prominence as a vibrant city for art owes a huge debt to the presence of the Nerman Museum of Contemporary Art, which celebrates its 10th anniversary this year.

Under executive director Bruce Hartman, the museum has helped Kansas City keep its eyes on the new, through stimulating exhibitions of national and international artists. Additionally, the high-energy Oppenheimer Collection, funded by former Leawood residents Tony and Marti Oppenheimer, now of L.A., gives many of those exhibited artists, including Kerry James Marshall, Dana Schutz, Brad Kahlhamer and Leo Villareal, a permanent presence here.

Joe Sopcich, president of Johnson County Community College, calls the Nerman a “game-changing asset for our college and community.”

“Under the impeccable leadership of Bruce Hartman, the Nerman reinforces the national reputation of excellence JCCC enjoys,” Sopcich said.

As the Nerman Museum of Contemporary Art turns 10 this year, Bruce Hartman, the man who’s led it from the outset (as well as its predecessor, the JCCC Gallery of Art) oversees a formidable collection. Much of its direction was set in motion by a meeting in 2003 with benefactors Marty and Toni Oppenheimer. Producer Randy Mason talkes with Hartman about four important pieces that attest to the museum’s intentions and aspirations.

A lead gift from the Nerman family of Leawood in 2003 set a new museum on campus in motion. Four years later, the Nerman Museum of Contemporary Art opened its first exhibition in an elegant glass and limestone building designed by South Korean-born architect Kyu Sung Woo.

“The realization of the Nerman Museum was a dream come true,” Hartman says. “We have so many to thank — most especially the artists and patrons.”

For Hartman, the new museum was not a beginning, but an opportunity to build on the record of cutting-edge programming and major acquisitions he had established at the school’s Gallery of Art, located in the school’s Carlsen Center from 1990 to 2006.

During the ’90s, the Gallery of Art changed everything — for students, faculty and campus visitors, including Kansas City’s artists, who suddenly found themselves with firsthand access to ideas animating the national art landscape and the objects that carried them.

It is no stretch to say that the caliber and sophistication of Kansas City art grew in tandem with what was being presented on the Gallery of Art walls, and with the lectures that accompanied the exhibits.

Hartman responded to this artistic upgrade by making Kansas City art an area of emphasis in the permanent collection — 30 percent comprises works by local and regional artists. He also made KC art a prominent part of the exhibitions schedule, a practice he has continued at the museum.

Mary Wessel, an artist in the collection, had a one-person exhibit of her “Worldscape” photographic abstractions at the Nerman in summer 2010, and credits Hartman for “raising awareness and recognition of the many talented artists who live here.”

In a town that once thought, “If it’s made in Kansas City, it can’t be very good,” Hartman played a key role in changing attitudes about local art from patronizing to proud.

He made the same investment of faith in contemporary American Indian artists, buying and exhibiting their work as competitive contemporary art. This will be a significant part of his legacy.

Hartman was a trailblazer. He not only embraced the ideas in American Indian artists’ work; he also respected their frequent use of craft traditions and materials from their heritage. Where some other contemporary museums viewed these craft components as disqualifiers, Hartman saw them as elements that enlarged and enriched the contemporary art field. “In so many of these cultures, that is an extension of who they are,” he said.

John P. Lukavic, associate curator of native arts at the Denver Art Museum, who worked with Hartman to bring the “Super Indian: Fritz Scholder” exhibit to the Nerman last year, credits Hartman for the Nerman’s “inclusiveness” and its commitment to “validate and introduce the work of native artists to the contemporary art world.”

“The citizens of Overland Park and the Kansas City Metro area should know that Bruce has created something quite special within their own backyard,” Lukavic added.

Major museum donor Dr. Mary E. Davidson believes the Nerman’s American Indian collection “is destined to be one of the premier collections in the country,” and has helped it grow. Funds generated by the $1 million Barton P. and Mary D. Cohen Art Acquisition Endowment she created in 2009 have helped support American Indian acquisitions and other purchases.

The couple has a long history with the museum, dating to their funding of the Barton P. and Mary D. Cohen Gallery on the museum’s second floor in 2005, one year before Barton Cohen, president of Metcalf Bancshares Inc., passed away.

In 2014, Davidson announced a $700,000 gift to the museum to create the Kansas Focus Gallery, dedicated to works by artists associated with Kansas, in the first-floor space formerly occupied by the museum shop. The gift included funds for the acquisition of Kansas art and a donation of more than 175 works of art from the collection she assembled with her husband.

“The Nerman is really a gem in the opportunity it gives people in this county, state and area to broaden their artistic horizons,” Davidson said. “Kansas art gives another dimension to attract art enthusiasts of a different sort and to teach children and adults about the beauty of the state and the talent that is there.”

The Kansas Focus Gallery currently features an exhibit of works on paper by eminent abstractionist and KU grad, Don Kottmann. Kottmann’s show is the latest in a series of exhibits at the museum — and the Gallery of Art before that — examining trends in abstraction, from “allusive” to “aberrant” to “ecstatic,” through works by KC artists and nationally prominent names including Keltie Ferris, Stanley Whitney and Joanne Greenbaum.

Lush visuals, including a drop-dead Robert Zakanitch show in 2015, are just part of the exhibitions profile at the Nerman. Since its inception, the museum has evidenced a commitment to exploring pressing cultural issues, beginning with the inaugural exhibit, “American Soil,” a group show that took a critical look at the impact of unfettered development and environmental irresponsibility. Subsequent exhibitions have tackled topics of gender identity, global wealth, suburban sprawl, racism, religion and masculinity.

Selections from many of these exhibitions live on in the museum’s Oppenheimer Collection, which parallels the exhibition program in its mix of issue-oriented work and abstraction, Kansas City art and American Indian work.

“We never anticipated the size and scope this (collection) would reach,” Marti Oppenheimer said in a recent phone interview from L.A., where she and Tony Oppenheimer are now based. “We did it out of passion. With Bruce, we went on an adventure together.”

“I look at this very much as Bruce’s celebration,” Tony Oppenheimer added. “We got into this to support Bruce’s vision for art on the JCCC campus, and we’ve been doing it for 25 years with the Oppenheimer Collection.”

Lewis Nerman says his family “is thrilled to celebrate the 10th anniversary of the Nerman Museum of Contemporary Art” and “(looks) forward to many more years of exciting and innovative exhibitions from local, national and international artists.”

In a recent email, Nerman expressed his family’s “sincere gratitude for the support we have received during the past 10 years,” and urged the entire community to join them for the 10th anniversary gala and benefit auction, “Beyond Bounds: DAZZLING!” on April 29.