Did you have a Betsy Wetsy or a Bitty Baby growing up? Well, the baby dolls of today owe their realistic pouts to the “Kaiser Baby.”

In this edition of Curator’s Choice, doll collector and United Federation of Doll Clubs volunteer Debbie Tracy shares the story of a doll with a face that she says, “Only a mother could love.” 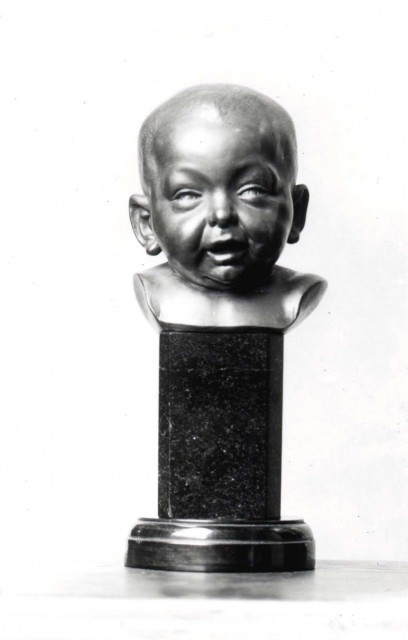 Bronze sculpture by German artist Arthur Lewin-Funke that became the mold for the “Kaiser Baby.” Image courtesy of www.lewin-funcke.de.

The Kaiser Baby was “born” in 1908 when German doll manufacturers Kämmer & Reinhardt  commissioned Arthur Lewin-Funke to sculpt a realistic bronze of a baby head. This was directly opposed to the placid, idealized faces of dolls during the Victorian Era.

“He was introduced at the Munich Toy Fair in 1909,” Tracy said. “The buyers at the fair were very reluctant to bring a doll that was so different from anything else on the market back to their shops and stores, but a few of them were persuaded to do so. [They] were mighty surprised when these dolls flew off the shelves, and they had to re-order.”

Dolls like the Kaiser Baby, with more realistic and varied expressions, came to be known as Character Dolls and remained in vogue until World War I brought doll-making in Europe to a halt.

In 1937, a doll collector named Mary Lewis advertised on the radio, inviting fellow doll enthusiasts to meet her at New York Hotel. Eight women responded and together they formed the National Doll and Toy Club.

In 1949, several doll clubs, including Lewis’, formed the United Federation of Doll Clubs and elected Lewis as its first president. There are approximately 500 member clubs worldwide today.

More information and museum hours are available at the UFDC website.