A Rich History Of Good Walks 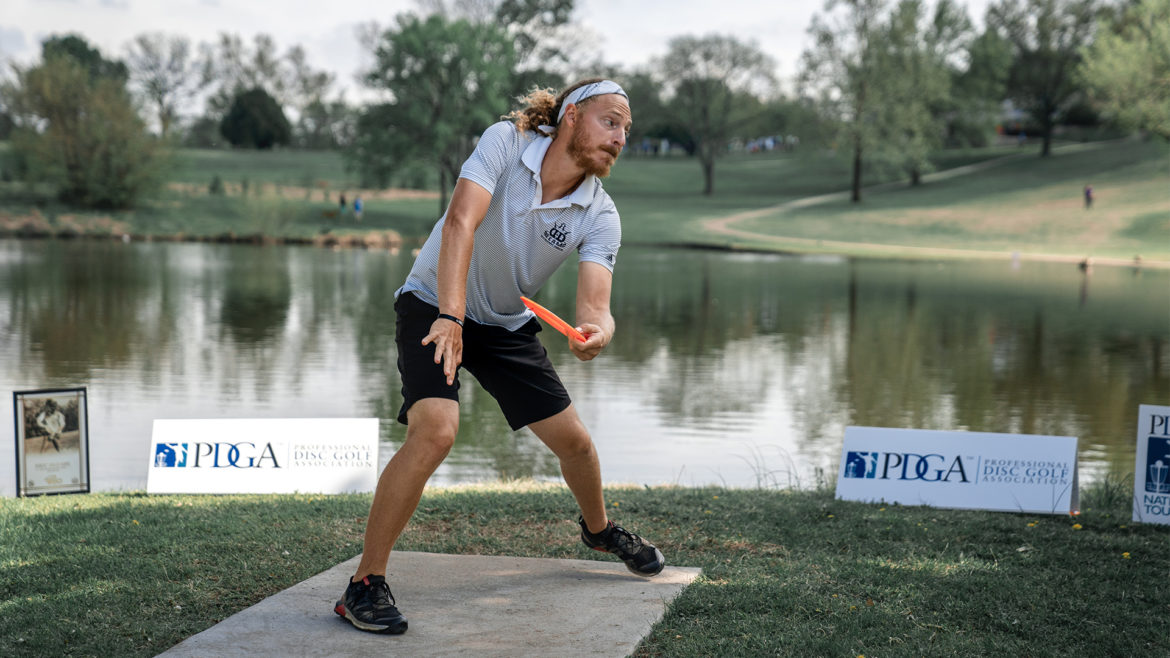 Deep in the wooded bluffs along Historic Northeast Kansas City’s Cliff Drive, midsummer afternoons buzz with the sound of cicadas and an occasional rattle of chains. The hum of East Bottoms industry below is subdued, aside from an occasional train whistle. There’s hardly a break in the surrounding greenery. It doesn’t feel five minutes from downtown.

The setting is par for the course for disc golfers who pick their putters from the jingling chain baskets, mull over their shot selections, and hike to the next tee box. Cliff Drive is home to one of approximately 50 disc golf courses within a 50-mile radius of Kansas City.

“We are so spoiled here,” says Kansas City Flying Disc Club (KCFDC) membership coordinator Dick Parker. “We have so many courses, so many different skill levels, style courses — tight, technical, open, long, short — that a lot of people can’t say that they have.”

The variety of courses in and around Kansas City reflects years of dedication from members of Parker’s club and the city’s rich disc golf history.

In 1988, disc golf cronies from Kansas City’s Swope Park linked up with Kansas’ Rosedale and Olathe club members to form KCFDC and promote their young sport. The group has since welcomed more than 2,000 members and collaborated with local municipalities to open and closely maintain 12 courses.

The club’s courses host nightly leagues for players of any skill level, welcome non-club members regularly, and have been played by the game’s very best in four World Championship tournaments.

“We are very lucky to have such thick roots in the sport here in KC,” Parker says, listing names and nicknames of people responsible for building the fringe sport in its midwestern hub.

According to Parker, “anyone who is anyone” in disc golf has passed through Cowtown.

There’s Rick Rothstein, creator of the very first disc golf publication, who moved to Kansas City in 1989 and is now a member of the Professional Disc Golf Hall of Fame.

And the Michael Jordan of disc golf, Ken “The Champ” Climo, who earned four of his 223 career tournament wins at the annual Kansas City Wide Open throughout the 1990s.

This summer, the 37th annual Wide Open once again brought the Professional Disc Golf Association’s (PDGA) best to town, and that crop includes Cris Clemons, a native of Joplin, Missouri, who considers Kansas City home. Clemons is regarded as one of the best left-handed players in the world, and earlier this month posted a top-20 finish at the PDGA World Championships.

As his career earnings climb toward $45,000, Clemons maintains the best part about the sport is that truly anyone can play.

“I think it’s super accessible and a part of the game is that there are tons of casual players,” he said. “It’s easy to play.”

Beginners might beg to differ — at least once they are standing in the tee box.

The majority of Kansas City-area courses are free to play and discs can go for less than $10. The challenge for “frolfers” comes with avoiding trees, shrubbery, parking lots, streets, park-goers and water hazards.

However, Parker and Clemons agree the learning curve comes quicker than it might in “ball golf” — especially once you learn how to throw your bag of discs. Each frisbee is designed to fly a desired distance, and slice in an optimal direction.

“Get something easy to throw — putters, mid-range, something slow,” Parker says. “You’re going to have a lot more fun getting out there versus trying to buy these high-speed drivers that supposedly go further. Because they don’t go that far if you aren’t that good.”

Clemons credits his success in the sport to his move to Kansas City, where course variety and strong competition took him from practicing alone for hours in an open field to teeing off in front of hundreds of spectators on the PDGA tour.

“I get friend requests every day on Facebook from people who I don’t know and some of them message me and are like, ‘Hey man do you throw this disc, what do you think about this?’” Clemons says. “If I see a new player I try to give them a disc so they don’t have to go buy one and then they can go introduce [disc golf] to someone else.”

While trying a sport for the first time in front of seasoned veterans and even professionals might sound intimidating, former KCFDC President Jack Lowe insists otherwise.

“You’re typically going to meet individuals who are generally relatively laid back,” Lowe says. “Most folks are going to take time to show you the sport.”

It’s been nearly two decades since Lowe also relocated to Kansas City with disc golf in mind, determined to become a part of the one-of-a-kind community himself. That’s when he came across the basket-less hills of Cliff Drive, consulted with players from the area, and took to the drawing board.

“Looking at the land, the topography, the under utilization, the trash — that park was in dire need of some love,” Lowe says. “It was a collaboration of me working with the city, the neighborhood associations, Parks and Rec, to do something to bring a positive activity to within the park.”

“It’s a good presence in the parks,” Kansas City, Missouri, Parks and Recreation Director Teresa Rynard says. “Wherever you have a lot of good positive activities, the negative activity selects to go somewhere else. All levels of play can play. You can be a pro and play, or you can be like me and take a while to get to a basket.”

The first of more than a dozen installs credited to Lowe, ‘Cliff Drive’ earned an environmental excellence award for trash removal, made an impact beyond the 18 holes, and, after a round, seems representative of its metro’s greater position in the game.

The par-60 course is an ingenious stage for the sport that happily survives out of the spotlight. A greenspace that is both protected and celebrated by the dedicated. A course built on tradition, that’s welcoming in nature.

“It’s a walk in the woods, throwing frisbees,” Lowe says.