10 Reasons the Chiefs Could Win Tomorrow 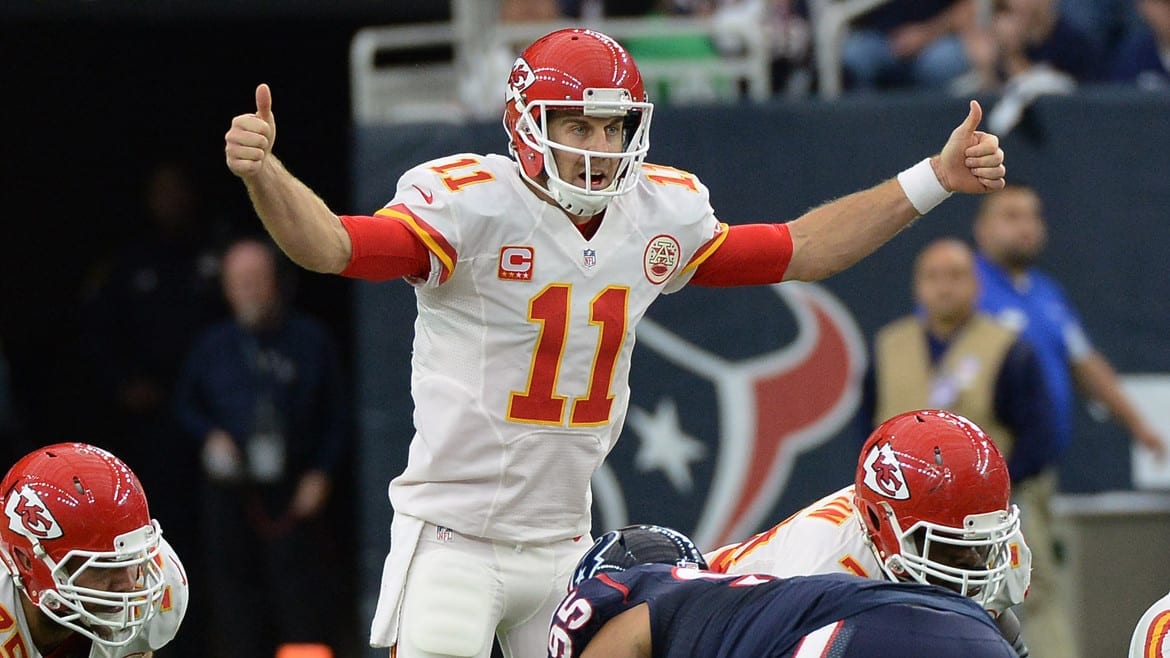 Saturday afternoon, the Kansas City Chiefs take on the New England Patriots in the NFL playoffs. Even if you aren’t from KC, there are plenty of good reasons to root against the Patriots. They are, after all, the most villainous team in sports. Mostly because they are cheating cheaters who cheat.

Granted, almost everybody cheats in sports. But there are different levels of dishonesty. With the Pats, we aren’t talking about a late hit now and then, or a little extra grabbing down field, a la the vintage Oakland Raiders. That’s the cute, wink-and-a-nod between-the-lines sort of cheating that all sports are prone to. We aren’t even talking about performance-enhancing drugs, where gray areas abound and the “everybody does it” argument really can hold water.

The Pats are different. This is a team that built a Super Bowl dynasty on systematic, institutional dishonesty. They’ve bugged locker rooms, videotaped other team’s practices and, yes, illegally deflated their own balls to prevent fumbles. They’re like the bad guys in a 1980s teen comedy.

And let’s not forget the Patriots’ charming and gracious fan base, ranked by Thrillist as the NFL’s worst. This is a group so notoriously, uniquely obnoxious that the word “Masshole” was added to the Oxford English Dictionary just to describe them.

The Patriots are also, unfortunately, extremely talented. That’s why New England is a five-point favorite. Nevertheless, there are plenty of reasons for Chiefs’ fans to have hope. Here’s ten.

The first reason for hope is that relatively scant five-point spread. The Pats are the defending Super Bowl champions. They are playing at home. They are coming off a week of rest. Still, bookmakers are wary. That alone should tell you that New England is in for a fight.

Kansas City has never been intimidated by New England. Last season the Chiefs humiliated the Pats on Monday Night Football at Arrowhead, 41-14. In 2008, quarterback Tom Brady was knocked out for the season by a low hit from KC safety Bernard Pollard. Yes, those games were a long ago in football time. Rest assured that Brady remembers.

We all know the Chiefs have been blistering hot. The club is on an epic, franchise record 11-game winning streak and coming fresh off a 30-0 playoff trouncing of the Houston Texans. The Patriots, meanwhile, have gone 2-4 over their last six games, and looked decidedly human doing so. New England was especially lackluster in their final game of the regular season, a loss against also-ran Miami that cost the Patriots home-field advantage.

The definitive match-up of this game will be the Chiefs defensive pass rush against the Patriots offensive line. And that O-line has been decimated by injury all season. The Patriots used 12 different O-line combinations over their 16 regular season games, and the result has been a discombobulated offense.

You beat the Patriots by making sure that Brady doesn’t have time to set his feet and find receivers down field. In the Miami game, he didn’t. Brady threw only five passes in the first half – the lowest of his career. His longest completion, beyond a screen that broke for 20, was a 12-yard toss to Rob Gronkowski. The Pats do get star left tackle Sebastian Vollmer back this week. He’ll help protect Brady’s blindside from the Chiefs’ Justin Houston, if he plays, or edge rusher Dee Ford. Still, New England has a patchwork pocket.

KC’s 6-foot-3, 346-pound nose tackle has been an absolute beast all season. Last week, he practically lived in the Houston backfield, and the Patriots will likely have to double-team him to open up holes for the run game. That Pats run game, by the way, has also looked anemic. In Miami, running back Stephen Jackson finished with just 35 yards on 14 carries, and the Patriots were held to 70 rushing yards overall.

Everyone, as the saying goes, is banged up this time of year. But the Patriots look particularly thin across their roster. According to Man Games Lost, New England led the NFL this season with 245 cumulative games lost to injury.

The Pats do see a few key players come back this week. Not only does Vollmer return, the Pats also get linebacker Dont’a Hightower and slippery wide receiver Julian Edelman. His name sounds like an accountant’s, but his game is like Steve Largent’s. Nevertheless, the returning players aren’t likely to be full speed, and the Pats will enter the game without depth across the board. That could particularly hurt them on special teams.

Maclin, KC’s free agent acquisition wide receiver, was a breakout star this year. He led the Chiefs in catches, receiving yards and receiving touchdowns. Against the Texans, though, Maclin was carted off the field, visibly upset. Thankfully, reports of a season-ending ACL injury proved unfounded. There’s a chance he could see a few snaps. If Maclin can’t play, he’ll likely be replaced by third-round rookie Chris Conley. The last time Maclin missed a game, against the Steelers, Conley caught six balls for 63 yards and a touchdown. That alone is reason to hope.

Bill Belichick Has a Black Eye

Really. The hoodie showed up this week with a shiner. Typically combative, he refused to say what happened. Granted, a bruise isn’t something that will matter to Vegas bookmakers, but the symbolism is still delightful.

The Chiefs have won seven of the 10 games they’ve played away from Arrowhead this year, and six of those 10 were against teams that eventually made the playoffs. The weather in Massachusetts – which could well have been a blizzard – won’t be much of factor, either. Foxborough is expecting light rain before the game and temperatures in the mid-40s.

Again, this isn’t the sort of thing that national NFL analysts will take seriously, but the Royals’ World Series win could be a big boost for the Chiefs. Scoff if you will, but the Chiefs have gone undefeated since the Royals won the title. Maybe that’s coincidence. But athletes, like any other human beings, are impacted by events around them. The Chiefs’ players, just like the rest of us, were likely thrilled and inspired by the Royals’ postseason run, and the scrappy, never quit, love-each-other, ego-free style that won us the crown. Chiefs players, you can also be certain, witnessed how the city turned out for the Royals’ victory parade and probably wouldn’t mind a little championship glory of their own.

Get in the Super Bowl spirit tonight at 7 pm when the NFL Network airs ‘Super Bowl I: The Lost Game’. Thought lost to tape erasure, the game will be shown for the first time since its original broadcast.

curiousKC: What are the Chiefs Doing Stuck at Home?

Working Out More Than You Are, Probably

Fighting for the Right to Party

Behind the Scenes at the Super Bowl

Clarence Dennis has seen things, things you may never see