Artist’s perspective: The images of a movement 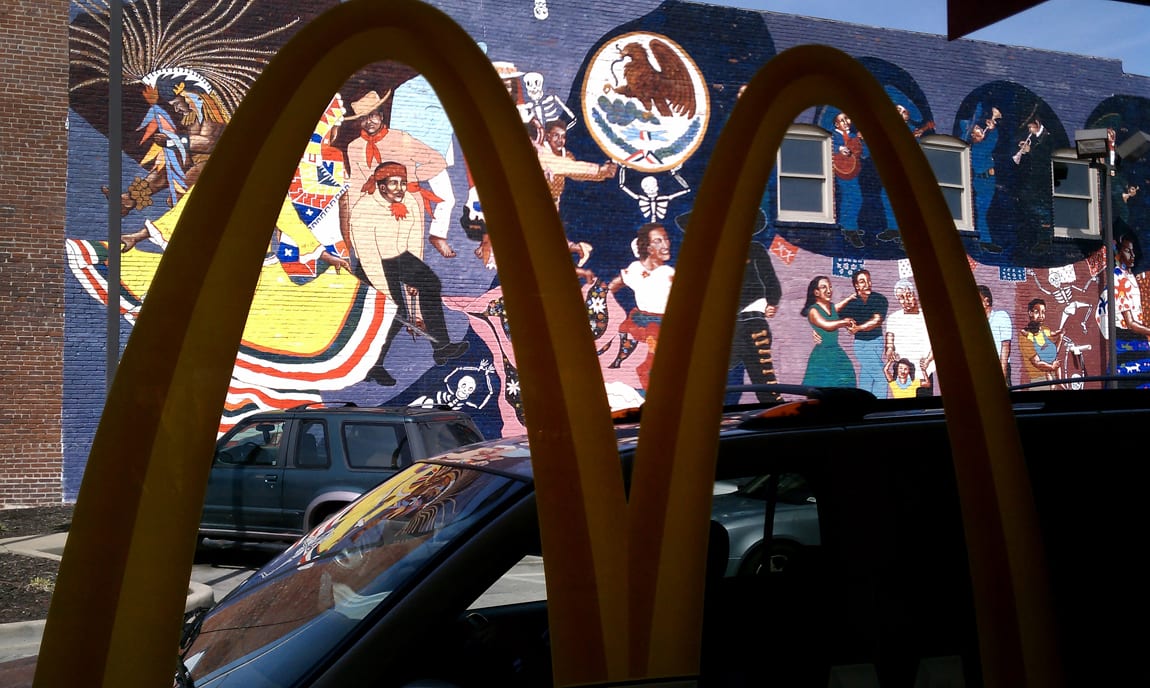 "We fight to provide for our family that struggles in this world to make a living." The Langston Hughes Club and Stand Up KC are documenting a movement through digital photography.
Share this story

Artistic practice has a potentially transformative relationship with labor and social movements in this country. Artists have played many roles in the history of reformation, from documenters to catalysts for change.

In the 1900s, for instance, Lewis Hine’s photographs of child labor in New York sparked much debate and acted as a means for labor reform. And Walker Evans’ photography during the Great Depression gave insight into the hardships of rural America. Now, Stand Up KC’s the Langston Hughes Club (LHC) is adding its own chapter to the history books. 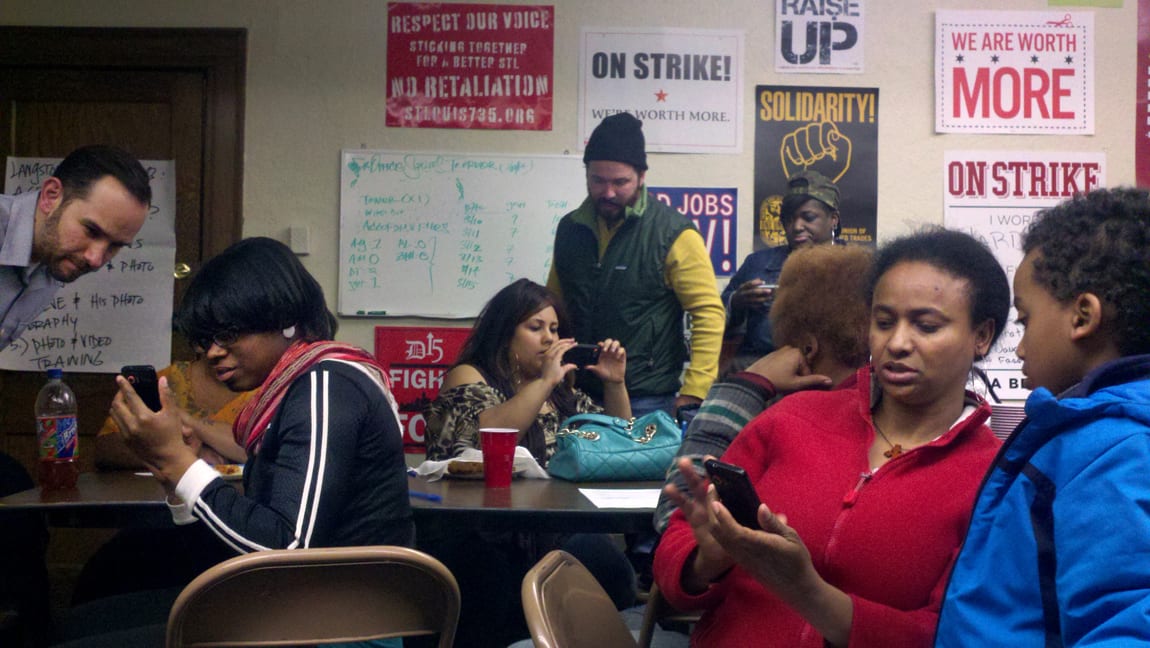 Here in Kansas City, LHC’s “I, Too, Am America” displays digital photography by fast-food workers active in the Fight for $15 movement. The exhibition opens May 1 from 6–9 p.m. at the Talk Shop, 3936 Main St.  (Full disclosure: The Talk Shop is a lecture and discussion series co-produced by me.)

As part of Stand Up KC and as an arts and culture committee of fast-food workers in Kansas City, LHC is fighting for a raise in the minimum wage to $15 per hour and the right to form a union. Stand Up KC is a local chapter of the national movement known as the Fight For $15. And, over the past two years, Stand Up KC has been actively organizing rallies, raising awareness about work-related issues and challenging corporations through strikes and protests to raise the minimum wage.

The movement has spread beyond fast food workers to encompass low-wage workers in a variety of industries such as university adjunct faculty, home health-care workers and airport services, who have all participated and created subcommittees. The shared philosophy is that anyone who works full time should be able to support themselves. 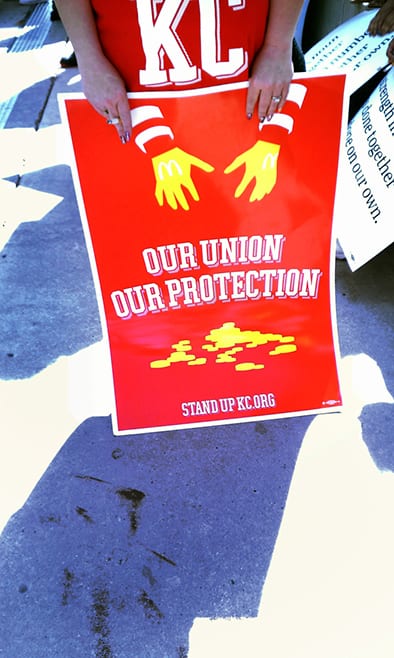 The Langston Hughes Club is probably the most unique aspect of Stand Up KC. This arts and culture committee brings together workers interested in the visual and performing arts and allows them to train with professional artists in various mediums. On a national level, Stand Up KC is the first to have a committee devoted to arts and culture. It came naturally out of the concerns of the workers, who needed to tell their stories and find a way to express their frustrations outside of demonstrations.

So far, the focus of LHC has been photography and spoken word. Activism and participation in labor disputes are exhausting, both physically and emotionally. Art-making nurtures space for reflection and the ability to acknowledge contradiction, which may be alternative outlets to the sometimes taxing nature of “traditional” activism. Art has the ability to be a relief from the day-to-day troubles anyone faces, and that relief is evident in these images on display.  It can serve as a calming individual exercise, while still expressing the message of the movement.

The first meeting of LHC took place in February 2014. The LHC has been working with Steven Herbert, a professional photographer who has been very active documenting Stand Up KC demonstrations and actions. Workers used their phones to capture moments out of their everyday lives and in between the organizing and Stand Up KC actions. If they didn’t have a mobile phone with camera capabilities, they were provided with one. Once a month the LHC meets, and the group reflects on their photography. Discussions, reviews and reflection encompass the evening, and, more importantly, the collaborative space for expression is made available.

The results? Selected prints by the group will be on display to the public for the first time since the founding of LHC. More than 50 photographs will be exhibited at The Talk Shop.

What the LHC is doing marks a radical shift in the collaboration between labor reform and artistic practice. Art and photojournalism has a longstanding track record of exploitation under the guise of social change and individual artistic glorification.

What the LHC is doing marks a radical shift in the collaboration between labor reform and artistic practice.

Many times, we only see what we want to see. Everything, from the way we design fast food chains to how we order our Happy Meals online, makes invisible the human source of this convenience. We do not see the struggle. LHC’s exhibition, and its movement, refocuses the lens on the people behind the kitchen door. In the process, multiple voices and struggles gain visibility.

The LHC has united workers and members of the community to create and foster awareness and to see themselves in one another not just as workers, but as parents, siblings, friends and fellow creators. These workers have been building their own voice for quite some time.

To see this transformative power of the arts in action is breathtaking. It shows us that we have the ability to transform the dissatisfaction of the world into the image of something better. It may be that, in this imaginative transformation, we find hope, community and the ability to acknowledge the invisible class as a group of people who deserve a living wage and a voice on the job.

Sean M. Starowitz is a Kansas City artist who works in a variety of social, political, and community engaged contexts. His projects include Fresh Bread, BREAD! KC, and Byproduct: The Laundromat. He is currently the artist-in-residence at the Farm To Market Bread Company.

Tags: art • Arts • disparity • Getting By in KC • minimum wage