Above image credit: Aerial view of the “Eye Heart KC” mural by recent Kansas City Art Institute alumni Parker Story, at the intersection of Westport Road and Wyandotte Street, created as part of the first round of commissions under the Asphalt Art Initiative program.  (Courtesy | Parker Story)
Sponsor Message Become a Flatland sponsor

The intersection of public art and traffic safety ramped up in September when Bloomberg Philanthropies granted up to $25,000 each to Kansas City and 25 other municipalities around the country.

The money is coming from Bloomberg Philanthropies’ Asphalt Art Initiative program, which pays for art to be painted at busy intersections. The idea is to create livelier public spaces and encourage drivers to slow down.

Maggie Green, media relations manager with the city of Kansas City, said the grant could provide art for several intersections here. She said the initiative will dovetail with the city’s Vision Zero Initiative to eliminate traffic fatalities and serious injuries on Kansas City streets by 2030. 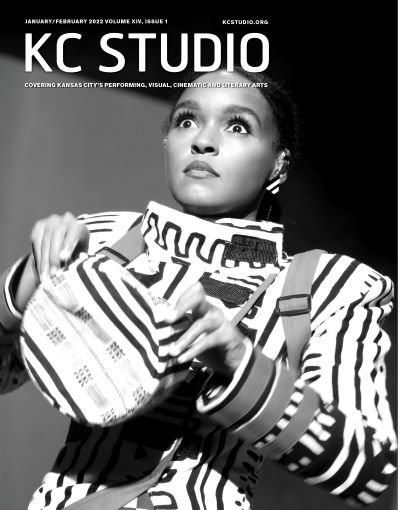 “We’re very excited about this,” Green said. “This is a great opportunity to create not just safety improvements, but also placemaking, and a more vibrant space that’s welcoming for everyone.”

The city is partnering with the Kansas City Artists Coalition (KCAC) on the program, which is expected to reach fruition by this spring or summer.

“Art is a huge part of helping communities feel like they are being seen and invested in,” said KCAC Executive Director Marissa Starke. “When you put art in those spaces, it helps to strengthen the work the city’s already done to help improve communities for the safety of the people who live and work there.”

The First Round: Westport Road and Wyandotte Street

The latest round of Asphalt Art Initiative funding follows the first round, which got underway in 2020.

First-round funding also included Kansas City and paid for work at the intersection of Westport Road and Wyandotte Street. The corner is familiar to countless numbers of people who have dined and partied in the historic Westport neighborhood or checked out a book from the venerable Kansas City Public Library–Westport Branch, which opened its doors in 1898.

In addition to artwork, bollards and large rocks were put in place to make the intersection smaller, and therefore safer, especially for pedestrians and bicycle riders.

“We shortened the pedestrian crossing distances by half,” said DuRon Netsell, the head of Street Smarts Design + Build, which provided design and construction services for the project. “We have reduced the average traffic speeds by about 45%. We reduced noise pollution by about 11 decibels.”

One of the sponsors for the Westport/Wyandotte project was Midtown KC Now, a nonprofit organization that supports midtown development.

“We are big believers in public art, especially where art can add beauty to the built environment,” said Kevin Klinkenberg, Midtown KC Now executive director. “We’ve had our eye on this intersection for a long time. This was a chance to do something good with it.”

Midtown KC Now put together a request for proposals and assembled a selection committee that included people from the surrounding neighborhood. Applicants were to submit proposals utilizing red, white, blue, green and yellow paint, with themes touching on concepts such as unity and harmony. Out of 27 applicants, the five artists selected were Alex Eickoff, Stephanie Bloss Foley, Teyha Riley, Taylar Sanders and Parker Story.

The corner of the intersection painted by Story, who earned a bachelor of fine arts in illustration from the Kansas City Art Institute in the spring of 2021, is entitled “Eye Heart KC.”

Story said participating in the project “gave me a sense of belonging, because I had been living around there for about three years. Normally when I work on art projects, there’s a disconnect between me and the community, or me and the viewers. This project was different because I got direct feedback from people walking by or driving by every day.”

The Westport/Wyandotte asphalt art project originally was to bring on four artists to paint the four corners of the intersection. But Netsell, who lives a few blocks away, said he and others involved with the project were disappointed when Sanders’ proposal didn’t make the cut.

To bring Sanders on board, the organizers found money in the budget to have her paint a mural on an exterior wall of nearby Camp Bow Wow, a dog care services outlet located at 104 Westport Road.

“What’s on the wall is very, very similar to her proposal, with the addition of a few more dogs,” Netsell said.

Klinkenberg said adding the Camp Bow Wow mural provided a “great addition” to the neighborhood streetscape. “We see people taking pictures next to it all the time.”

Sanders, a self-taught artist, said she was thrilled when she learned that she would be painting a mural facing Westport Road.

“I literally jumped up and down in my apartment,” she said. “I just adjusted my proposal a little bit, kept it community focused, and incorporated people and their love of dogs. It was the first opportunity to do one of the things I’m passionate about with art, which is public art.”

Meantime, Green said eight Kansas City intersections have been selected for safety improvements under the Vision Zero program, based on the highest level of crashes involving pedestrians and bicycle riders. They are:

The second round of Asphalt Art Initiative grants will fund projects in 2022-23.

The grant money will be used to enhance perhaps three or four of the intersections slated for Vision Zero safety improvements in Kansas City. Which intersections are chosen will partly depend on the level of interest and involvement in the surrounding neighborhoods, Green said.

“We’re going to look at which communities want to partner in the community art component,” she said.

Starke is excited about KCAC’s involvement in the Asphalt Art Initiative.

“We can move mountains if we’re included. Having artists and arts organizations involved from the beginning is very important to make sure we have intentional and valuable content, and really can be a game changer.”

Street Smarts Design + Build will be the project manager for Kansas City’s second round of Asphalt Art Initiative work.

Midtown KC Now is not involved in the second round, but Klinkenberg maintains his enthusiasm for the concept.

“We’re trying to enhance the walkability of midtown wherever we can,” he said. “Projects like this allow us to do that. We hope this encourages more people to do the same, to look at intersections or places in their neighborhoods where a splash of art and a little traffic calming project can come together.”