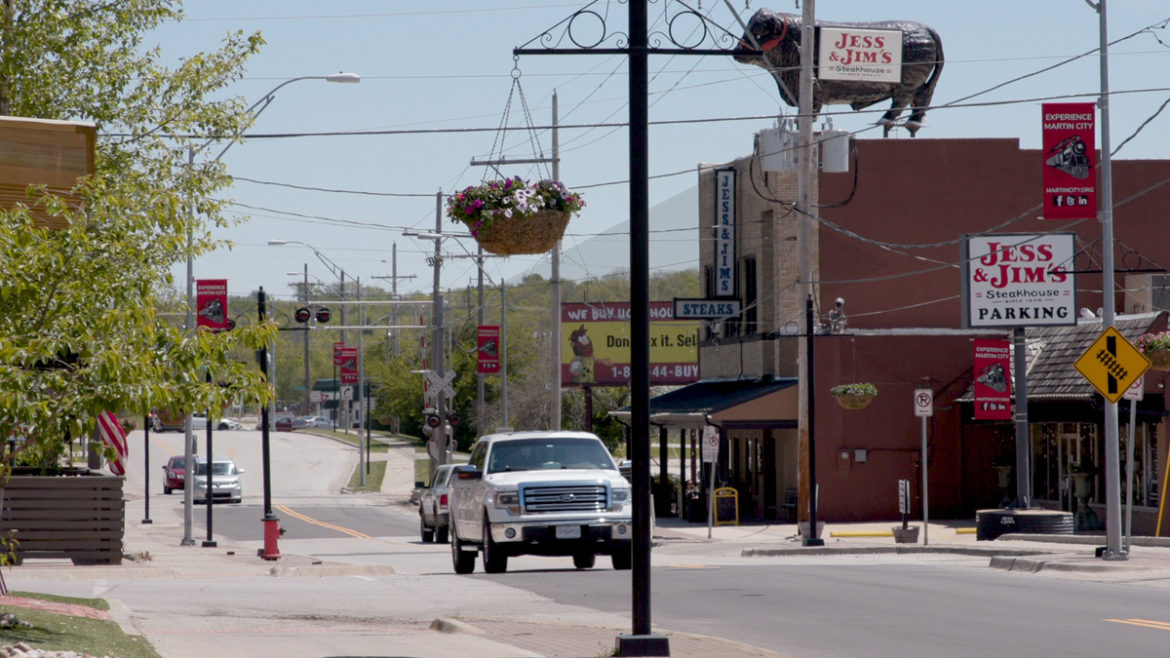 Hugging the south edge of Kansas City, Martin City has long been known primarily as an appetizing option for folks in search of hearty dining in a quaint atmosphere.

In recent years, though, the area has also attracted new businesses and infrastructure.

Those changes are highlighted by Fishtech, a cyber security services provider that moved to the neighborhood a few years ago. Fishtech boasts on its website that the “kegerator” in the employee break room is “usually filled with our local Martin City Brewery selections.”

“Kansas City is one of the top three logistics and transportation hubs in America, so areas like Martin City are very well positioned when you layer in an Opportunity Zone,” said Jon Stephens, president and CEO of Port KC, Kansas City’s port authority.

Martin City may well become a test case for the potential of Opportunity Zones in the wake of the economic shutdown forced by the coronavirus pandemic. Notably, Smithfield Foods recently closed two of its meat processing plants due to the COVID-19 outbreak, including one in Martin City.

While COVID-19 could generate greater community needs, the open question is whether the resulting economic shock waves rupture investment pipelines.

Martin City, located in the vicinity of 135th and Holmes streets, has a lot going for it. Its name makes it sound like it’s a separate city, but it’s actually part of Kansas City, Mo.

“Martin City is a growing area of our community,” said Kerrie Tyndall, assistant city manager. “It has really great proximity to highways. One of the biggest assets is abundant developable land, which makes it somewhat unique in terms of the other Opportunity Zones we have in Kansas City.”

Vickie Wolgast, president of the South Kansas City Chamber of Commerce, said Martin City was doing pretty well “up until the point of coronavirus. We’ve had a lot of business growth over the past few years. The completion of 135th Street has been good. One of our biggest assets is that a lot of the businesses in Martin City are locally owned, so it has kind of a small town feel in a big town.”

Martin City also has benefitted from the redevelopment of the old Richards-Gebaur Airport into an inland port known as the CenterPoint-KCS Intermodal Center. Port KC has worked to attract private developers to the site.

Stephens said the growth of CenterPoint and the “incredible revitalization of the Martin City main street corridor have really put the Martin City-South Kansas City area on a positive trajectory.”

The diverse economic base of Martin City actually presents one of its challenges.

Nilson Goes, president of Infinite Energy Construction in Martin City, said the neighborhood is “having a hard time finding its identity. You have a couple of restaurants that have done really well. Then you have some construction companies. With that, it makes it really hard to masterplan for a bigger district and have a more unified type of goal.”

The Opportunity Zone program, created by the federal Tax Cuts and Jobs Act of 2017, makes trillions of dollars available for reinvestment. Investors can defer paying capital gains on existing investments by redeploying that money in an Opportunity Zone.

Localities qualified as Opportunity Zones if they were nominated for that designation by their state and the nomination was certified by the Secretary of the U.S. Treasury. Martin City is one of 8,762 Opportunity Zones nationwide.

Some of the locales chosen are weighed down with economic distress, while others are clearly on their way up. “The Martin City area is clearly on its way up, but I think it definitely could use some help and support,” Stephens said. “It’s had its ups and downs over the decades.”

To date, though, the Opportunity Zone program has had a minimal impact on Martin City.

“I think the people that have the capital to be able to invest in an Opportunity Zone are aware of it,” Wolgast said. “We haven’t seen a lot of activity that we could specifically attribute to the Opportunity Zone.”

Tyndall said the program has “created a conversation among the civic organizations, neighborhoods and businesses that were advocating for these areas, and gotten them to think more strategically about community investment. I think it also provides some motivation for neighborhood groups and community advocates to be more proactive in how they’re marketing and planning development in their area, and also recognizing the relationship between real estate development and business development.”

The Opportunity Zone program calls for advocates to go into neighborhoods and ask residents what they want and need.

“I think that strategy is the only way that this can work,” Stephens said. “And I am optimistic. I think developers, particularly ones that are working in Opportunity Zone funds, are understanding the role they play in working with community leaders and with the community at large.”

The program has come under criticism for being confusing and slow in providing guidance. “I was working on the Kansas side of the metro when Opportunity Zones came about, and I spent the better part of two months before we even knew how to submit distressed areas,” Stephens said. “There was just a big lag of direction.”

Goes, the construction executive, said the program is geared toward new businesses, or investment in an existing business by a qualified fund. He added that the complexity of the program may prove daunting for many small businesses.

“Martin City is made up primarily of small businesses,” Goes said. “If you have a fund investing in your small business, you’re typically going to have to give up some equity for that investment. I don’t know if most Martin City businesses are in for that.”

But additional steps are needed for the program — scheduled to sunset in 2021 — to achieve its full potential.

“The word needs to get out more. There needs to be more education. Congress will need to take up an extension of it,” Stephens said. “I think Kansas City could be a leader in making sure this is an equitable tool that really benefits those that live and work in the neighborhoods that are Opportunity Zones, and not just a vehicle for national and international companies to make a financial transaction that doesn’t benefit the local community.”

No one can say exactly how the COVID-19 pandemic will affect the Opportunity Zone program, but everyone agrees that it will play a role.

“I think money is going to be tight for a lot of people now, given that so many businesses are having to be closed or just seeing a drop in revenue,” Wolgast said.

Tyndall said COVID-19 could cause the Opportunity Zone program to “get lost in the shuffle” with other stimulus programs. On the bright side, she said the pandemic has drawn attention to a lack of needed investment in “mom and pop” businesses, “the things that make our communities very authentic, that give them a sense of character and uniqueness.”

Stephens hopes the Opportunity Zone program will help get the country back to work in the wake of the pandemic.

“For Opportunity Zone funds, particularly the ones that have already been assembled and are ready, it’s really time,” Stephens said. “If you’re going to take advantage of it, put that capital to use in these distressed communities.”

Longer term, Stephens thinks the supply chain disruptions caused by the pandemic will lead to a greater emphasis on local and regional manufacturing.

“In places like Kansas City, I think it should result in thousands of new quality jobs,” he said.

Flatland is exploring the implementation of Opportunity Zones in the Kansas City area, on both sides of the state line, and tracing their impact. Take a look each Wednesday through June 10 as we examine the nuances of the law and the forces behind the opportunities. Next week, we’ll take a closer look at Shawnee.