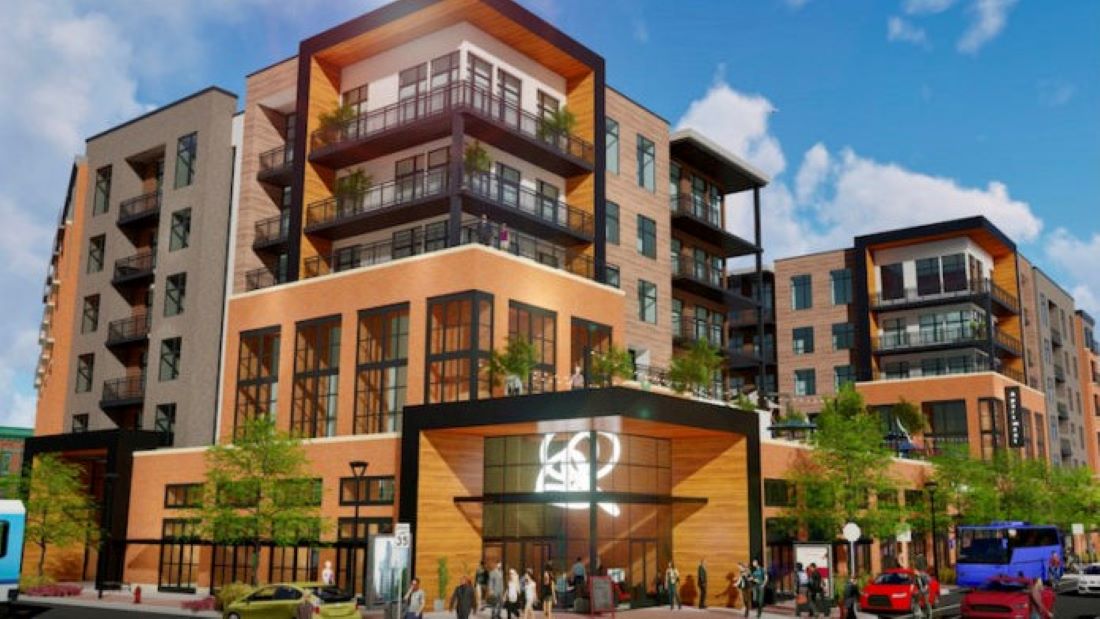 The 246-unit apartment plan proposed for a public parking lot northeast of Third and Grand was approved for a 25-year property tax abatement from the Planned Industrial Expansion Authority on a 9-4 vote.

The PIEA board rejected the Third and Grand proposal in April on a 6-4 vote.

“I think this is a fantastic project,” said PIEA board member Jake Schopp. “I think, having done some research on EPC, they’re the right player for this project and I’m excited about it.”

But it was the backing of councilman and PIEA board member Kevin O’Neill, who had voted against the incentive request in April, that proved influential this time around. Three new PIEA board members also began their appointments at the meeting.

O’Neill is the publisher of the Labor Beacon newspaper and a union advocate.

3G Development revised their plan to guarantee at least 40% of the work would go to contractors paying prevailing wages, a scale established by unions. It also would make it easier for those prevailing wage contractors to compete for additional work.

If a contractor submits a bid within 10% of another bid from a contractor not paying prevailing wages, 3G would award the bid to them.

“I appreciate you guys working on that aspect with the prevailing wage, that was a big factor for me as you well know,” O’Neill said.

The Third and Grand apartment project calls for five levels of housing above a 232-stall garage. The development also includes 7,500 square feet of retail space facing Grand Boulevard and provides a 25-foot corridor for a planned bicycle and pedestrian path.

As part of the project, 3G had agreed to accommodate an internal bus stop, a transfer rest station for RideKC drivers and several parking spaces for the Kansas City Area Transportation Authority.

The project was described by the KCATA as a prime example of transit-oriented development because of its location on the streetcar line, bus service and the adjoining bike and pedestrian path.

The KCATA and the city own the parking lot where the project is planned and will split the $2.23 million sales price.

As was the case two months ago, opposition to the tax incentive request was based on its duration and level.

PIEA board member Andrea Flinders made a motion to reduce the abatement to 15 years, 75% for 10 years, 37.5% for five. She also asked that a review be made every five years to see if the incentive level remained necessary.

“Right now, we don’t know what the future is going to hold,” Flinders said.

“Housing costs have jumped up crazy amounts and I think that it’s important for us to evaluate these projects as they go along instead of giving people 25 years and then never looking at it again.

“I do believe as a board we need to be responsible about how we give out these tax abatements.”

The developers responded that subjecting the incentives to reviews every five years would not be acceptable to banks lending money on the project. They also said a 15-year abatement would make the project financially unviable.

A review by S.B. Friedman, a private consultant, estimated the Third and Grand project would earn a 5.1% return on its investment with a 25-year abatement, and 4.9% with 15. The project would generate a 3.6% return without an abatement.

Flinders motion was rejected by the PIEA board on a 10-3 vote.

Since the land is publicly owned, it currently pays no property taxes.

The developer estimated that it will yield $13 million in new revenues over the 25-year life of the abatement to taxing jurisdictions including schools and libraries.

Friedman estimated that figure at $9.5 million. The developer said its estimate was based on current taxing values established by the city and county. Friedman believes those figures likely would be discounted for the project.

Because the Third and Grand proposal was submitted before the City Council established its affordable housing requirement, it will not be required to set aside 20% of its units as affordable.

Friedman projected the market-rate project still will be affordable to households earning 70% to 100% of Area Median Income. The Kansas City AMI for a one-person household is about $60,000 and about $69,000 for two people.

The Third and Grand project still must have its development agreement considered by the PIEA and then the project must be reviewed by the City Plan Commission before going to the City Council for a final decision.

Bill Crandall of CBC said the developer would like to begin construction in about nine months.

“This is a major accomplishment for us and the leadership shown by the (PIEA) board and staffed transformed the outcome,” he said.

The Third and Grand project is the third large apartment plan in the works for the River Market.

The 94-unit Ashland project is expected to begin construction this year at 110 E. Third, and a 13-story, 300-unit project is planned for a public parking lot west of the City Market.