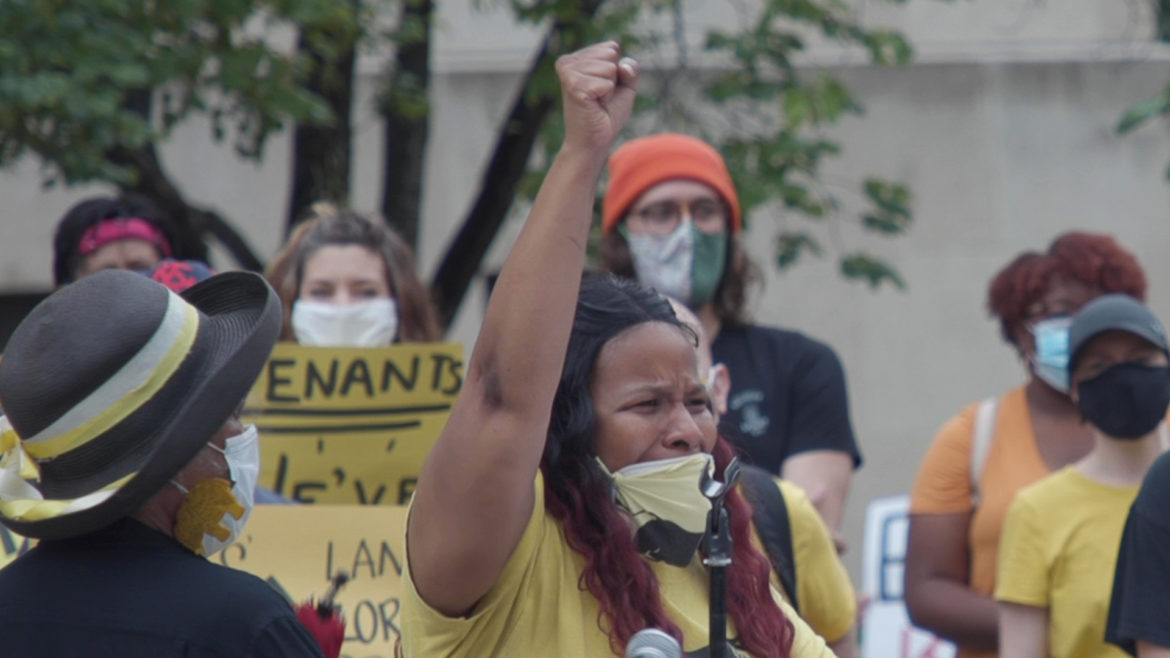 The fight for tenant rights is also a fight for racial equity, contends the grassroots organization KC Tenants.

Black and Hispanic communities are hardest hit by the COVID-19 pandemic. The same goes for those who are evicted, an issue that has affected communities of color for years now but has been exacerbated by the pandemic. That point was made repeatedly during a protest led by KC Tenants last Thursday at the Jackson County Courthouse.

“Evictions are an act of violence,” about 50 protestors chanted, interrupting court proceedings that would determine whether a tenant would be evicted or not.

Tensions were high among anxious tenants awaiting their trial and legal counselors hoping to intercept and aid as many as they could. Whenever some organizers were escorted out of the courtroom, others would cycle back to continue disruptions. This process continued – both in person and virtually in a video conference eviction court – until court ended.

KC Tenants has been organizing for more than a year. However, in the wake of George Floyd’s killing and recent protests against police brutality, the group has engaged many other issues that disproportionately affect the Black community. Other recently formed racial justice groups – such as Black Rainbow and One Struggle KC, as well as climate justice group Sunrise Movement – attended and supported the protest.

Their solidarity mirrored other groups that signed an open letter condemning Mayor Quinton Lucas’ response to Operation LeGend demanding that funds be diverted to help with issues such as health care, education and housing.

“These intersections need to be acknowledged,” Bonner continued. “Separating issues and saying that this is your issue to deal with, and not mine — that’s not actually how we get anything done.”

KC Tenants contends problems families face stem from inequities that cause a ripple effect. If a person can’t find a job, they can’t pay rent. If they don’t pay rent they’re evicted. If they’re evicted, they run the risk of becoming homeless and vulnerable to a virus that is contracted by more Black and Hispanic people than other racial and ethnic groups.

Soaring unemployment because of the pandemic and last week’s sunset of the $600 weekly unemployment bonus threatens a wave of evictions for Kansas City residents. A recent study from CNBC based on Census Bureau data shows that 48% of Missouri households and 34% of Kansas households will be at risk of eviction in August, which would disproportionately affect Black and Hispanic communities.

Data for the Black-White unemployment ratio in Kansas and Missouri were unavailable, according to the Economic Policy Institute. However, unemployment rates among the Black and Hispanic communities nationwide remain higher than White and Asian rates.

The demographics of essential workers during the pandemic also exacerbate the problem. Nearly half of workers in food and agriculture sectors – of which there are many in the Midwest – are people of color, according to the Economic Policy Institute.

Local advocates argue inequities are everywhere – in the workplace, in law enforcement and housing. That’s why the group exclaimed in chants and in a banner: “End evictions or people die.”

Take, for instance, cancer survivor Tiana Caldwell.  Although she was able to pay her August rent, she was laid off because of COVID-19. Now she fears she’ll be forced out of her home and on the streets, vulnerable to complications if she contracts the virus with her already weakened immune system because of cancer treatments.

“Evictions will kill people like me,” she said during the demonstration, with a chorus of people replying, “That ain’t right.”

Her sentiment was echoed by dozens of attendees, some of whom have personally felt the weight of racism manifested in different ways.

According to a statement by the Jackson County Circuit Court, organizers’ efforts would be better focused elsewhere like “lobbying the executive and legislative leaders to change the laws.” The court also claims that the demonstrations were ultimately counterproductive and that disruptions “actually interfered with the rights of the parties who were attempting to participate in those proceedings – including attorneys who were there representing the rights of the very tenants for whom those protesters were purportedly advocating.”

But by delaying evictions, KC Tenants claims to have made good on their promise to “shut it down” until a moratorium on evictions is reinstated.