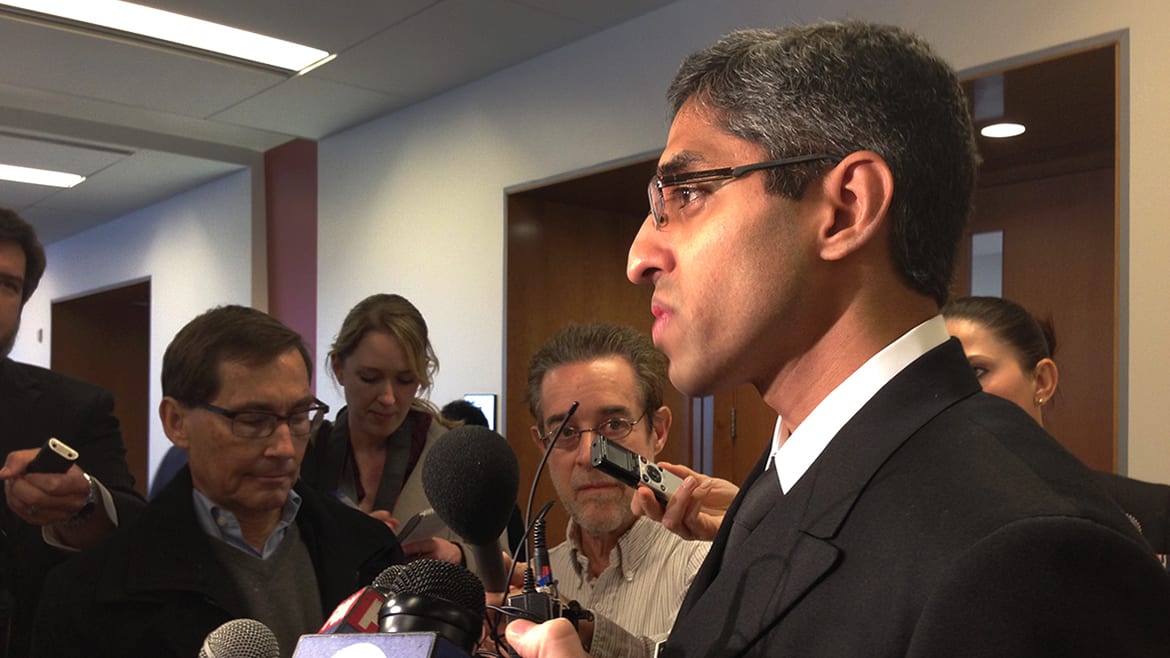 U.S. Surgeon General Vivek Murthy was in town Thursday as part of a “listening tour,” meeting with community leaders, physicians and others to discuss public health concerns. Among the topics they addressed were childhood obesity, violence, prescription drug abuse and access to health care. Murthy, a Harvard-trained physician, was confirmed as the nation’s top public health official in December after the position had been vacant for more than a year. He met with reporters this morning. Here are excerpts from his remarks:

I think it’s very important that people get immunized. There are diseases we can prevent like measles, but there are also illnesses like the flu for which we have vaccines available and it’s important for us to get vaccinated for the flu as well. So my message as I go to communities across the country is to emphasize the importance of vaccination. I understand there are concerns that some individuals have about whether there may be harmful effects from vaccines. There’s been some concern whether the measles, mumps and rubella vaccines causes autism. I want to say that definitively there have been studies which have proven there is no link between the measles vaccine and autism. But not everyone has gotten this message, so that’s partly why I’m here out on the road, to talk about the importance of things like immunization.

… there was a study that was published in the New England Journal (of Medicine) some time ago which calculated the number of lives that were saved over the last century because of immunization, and it was over 100 million. That’s an extraordinary number. My concern is that if we don’t continue to immunize people that we’re going to lose some of those potential benefits…

The way I approach this is I recognize when people have concerns about vaccinating their children, that comes from a good place. Ultimately, every parent wants to protect their child. They don’t want their child to be at risk from being hurt in any way. So I recognize that and I think it’s important for all medical professionals to recognize that. But I also think we have to share what we know about the best of science and what it says about immunizations. And the truth is there was a time in this country where we saw far more vaccination-preventable illness before we had the ready availability of vaccines like the MMR vaccine, like the flu vaccine, like others, and folks who remember those times remember that those were not happy times.

The leaders that I met with in Kansas City earlier today shared a number of concerns that they have. First was a concern around mental and behavioral health, around the continued stigma we have with mental illness. But also the difficulties with accessing mental health care and the lack of integration with traditional medical care. But they also shared concerns about violence in the community, they shared concerns about childhood obesity, about prescription drug abuse, which are increasing and are at record levels. And they shared concern about the importance of prevention. But the challenges that we face (is) in getting funding bodies and others to recognize that prevention is worth the money that we spend on it.

Now there have been some concerns out there and story lines that the vaccination this year for flu is not as effective as in prior years, and it’s true that the vaccination is not as effective as we want it to be, but it still does work for some people and it’s important for everyone to get vaccinated. Because even if it reduces your risk by 25 or30 percent, it’s still important to give yourself a shot at better health. Because the truth is that when people get the flu, it’s not a benign illness, but it often leads many senior citizens to get hospitalized and we’ve had a number of infants and young children who have died from the flu.

I did hear from one of the community leaders here that they feel public health is significantly underfunded in Missouri in particular, and so I know it’s a real concern here… Because I do believe that public health funding is important. If we invest in prevention, it saves us more money down the line.