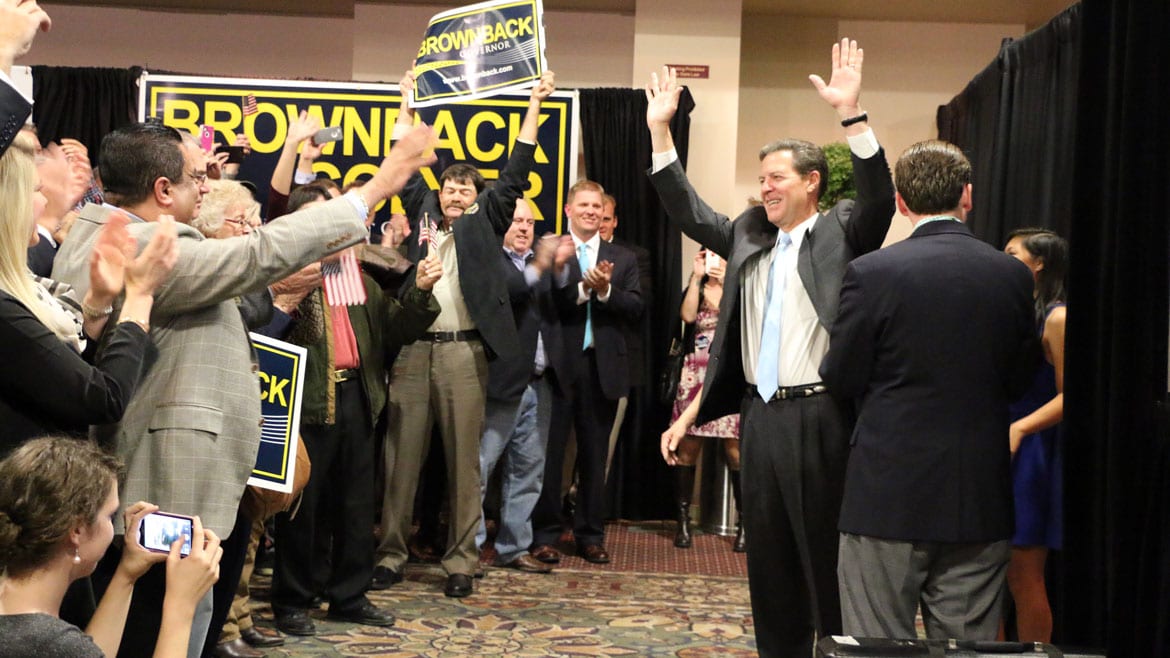 At a GOP watch party in Topeka, Kansas, party-goers were gathered around a single television, nursing beers and snacking on hot dogs. When the re-election of Republican Sen. Pat Roberts was called around 10 p.m. by Fox News, cheers erupted from the crowd. The excitement in the room only went up from there as Republican victories — both local and national — were announced one after the other.

Roberts took the stage in Topeka about 45 minutes after his re-election was announced for an ebullient victory speech. As he walked on stage, he was greeted by shouts of “Go, Pat, go!” and “We love you!” He was joined on stage by his wife, children and grandchildren.

After tonight’s midterm elections, Republicans now control the Senate. The re-election of Roberts, who has served as U.S. senator since 1997, was only part of a nation-wide landslide of Republican wins. The election of Republican Thom Tillis in North Carolina secured Republican dominance in the U.S. Senate.

Roberts’ speech began with this theme.

“The country was counting on us to deliver a Republican majority to the Senate and we delivered,” he said.

Roberts promised an end to the “Obama/Reid” gridlock in Washington.

“I will be bold, constructive and conservative,” he said. “And we will get things done.”

The crowd was raucous: this speech took place at nearly 11 p.m., and the beer and wine had been flowing freely since before 8. Supporters cheered, prayed and took selfies as Roberts spoke.

The party echoed with shouts of “We want Sam!” and “Four more years!” as the crowd waited for a victory speech from Brownback.

And, around 30 minutes later, Brownback took the stage to the theme from “Rocky.”

He congratulated Davis for running a competitive race and said that his own path back to the governor’s mansion felt like a 15-round boxing match. In the end, though, Brownback said his philosophy fits better with Kansas values.

“Paul Davis is a great guy,” Brownback said. “He has a philosophy, and I think it’s not consistent with where the majority of Kansas is. It’s a center-right state.”

When outlining plans for his second term, he kept things vague.

“We want to move this state forward and have it be the best place in America to raise a family and to grow a small business,” he said.

He wrapped up his speech in a playful way, much to the delight of cheering GOP party-goers.