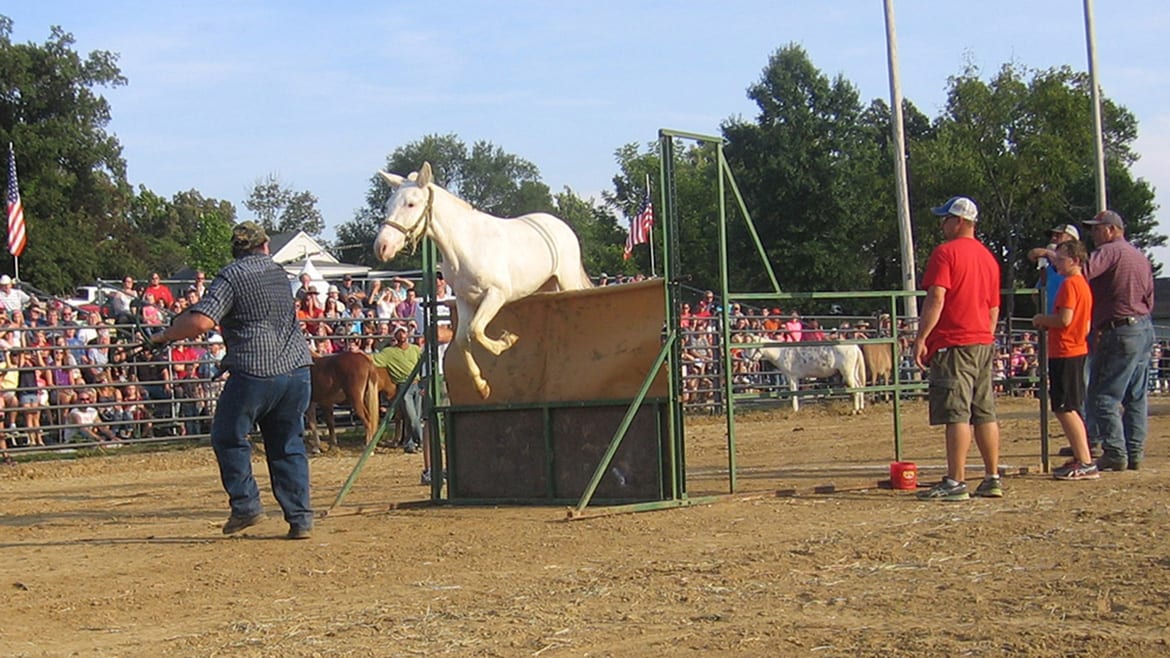 Fair-goers pack the stands at the East Perry Community Fair in Altenburg, Missouri, on a warm, sunny Saturday afternoon. They aren’t here for the blue ribbon pigs, the truck pull or the beauty contest. These people are here for the fair’s biggest attraction — the jumping mules.

Mule jumping is a simple sport. A handler leads a mule into a chute. At the end, there’s a pole with a blanket draped over it. Mules must stop before jumping, and they have two chances to clear the pole or be eliminated. After each round, the judge raises the pole two inches.

Mules jump in three divisions based on height: small, medium and tall. A small mule, for instance, is 47 inches or under. Mules should generally be able to jump higher than their height to stand a chance in a good competition. Prize money varies from fair to fair. At Altenburg, winners pick up $50 for first place.

“When they got to a fence or something they’d have to open a gate or go around a ways,” Mangels said. “One night, somebody said, ‘You know, I bet my mule can jump that fence.’ And so he laid his coat across the fence, and he coaxed his mule, and he jumped.”

A little friendly ribbing between raccoon hunters led to organized competitions at fairs throughout the South and Midwest.

The LeBron James of the Altenburg mule jump, the one to beat, according to Mangels, is Jerry Manees. He scouts high and low for the next exciting mule prospect. Standing next to his trailer with the six mules he entered into this year’s contests, Manees said he’ll handle between 100 and 300 mules each year to find one new animal to add to his lineup.

“We want to buy wild mules. Mules that hate people,” Manees said. “They are the kind we make the best jumping mules out of.”

Manees competes throughout Missouri, Arkansas and Illinois — anywhere there’s a big enough purse and the sweet smell of competition. Mean mules, Manees said, are the ones with enough “snap” to jump 60 inches.

“If you want to get a paycheck, you’ve got to be able to jump over 60 inches,” Manees said.

Other competitors are more laid back. Daryl Ruehling, from Perryville, Missouri, has only one mule in this year’s fair. It’s a 38-year old mule named Tex who Ruehling characterized as a “veteran.”

“He knows exactly what to do when he gets up here,” Ruehling said. “He heard the announcer and he was getting fired up.”

One of Jerry Manees’ mules took home the gold in the small mule division. The mule could jump. After the win, Manees showed off a little by having his mule get a running start — which would be illegal during competition — to see just how high. The small mule, which stood under 47 inches, cleared a hurdle of 62 inches.

Tex didn’t make things easy on his young handler, 14-year-old Gabe Ruehling. Once, he looked like he had no interest in jumping. He botched the first jump a couple of times and had to clear the hurdle on high-pressure second jumps.

Jerry Manees’ mule Albert never showed the same reluctance to jump, but he didn’t have his best stuff. With the bar set at four-feet eight-inches, Albert twice came up short and was eliminated.

Polly never even made it that far. The persnickety mule went into the chute, stared at the pole, put it in reverse and backed out while dragging her handler. Some say mules are stubborn; others say they know their limits. Once a mule knows it can’t jump over the pole, it quits. All the cussing and cajoling in the world won’t get a mule to jump.

With victory a mere 56-inch jump away, Tex nonchalantly cleared the hurdle and took the crown. And his handler, Gabe Ruehling, was all smiles and jokes in the winner’s circle.

At just 14, Ruehling is an up-and-coming star. And he has an old mule who still knows how to aim high.