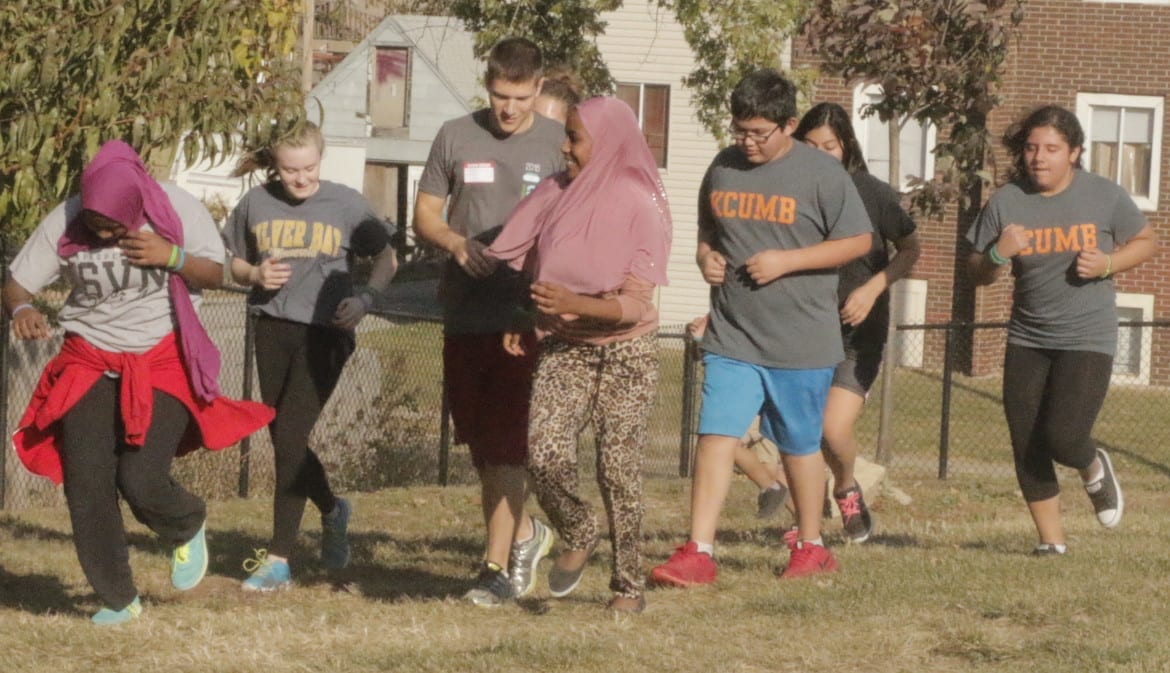 It was windy and unseasonably warm, but that didn’t stop a group of students from Scuola Vita Nuova Charter School from gathering one afternoon this week for their long-distance-running training session.

Sweating right along with the roughly two dozen fifth- through eighth-graders was a trio of medical students from Kansas City University of Medicine and Biosciences (KCUMB). The university sits near Scuola Vita in Kansas City’s Historic Northeast neighborhood.

“Good fitness, exercise and diet is really important as a preventative treatment for potential diseases instead of having to treat them later on,” said Rose Mueller, 26, one of the medical students. “Living a healthy lifestyle really begins at a young age, and that’s what we are trying to instill in these kids.”

Joining Mueller were Monica Paulson, 25, and Blake Westling, 24, members of the university’s Fit Doctors Association, which promotes health and wellness among the medical students. They provided support to workout leader Michael Jonagan, who teaches fifth grade at Scuola Vita.

With deep roots in that part of the city, KCUMB views extensive outreach into neighboring communities as part of its mission. Many of those communities have health challenges common among low-income populations, including lack of health insurance and limited access to nutritious food.

KCUMB students are also helping out at nearby Gladstone Elementary School, preparing kids for the 5K portion of the upcoming Cliff Hanger Run.

Scheduled to take place Nov. 1 along Cliff Drive, a scenic byway that recently reopened after an $860,000 restoration project, the race route begins and ends on the KCUMB campus.  A pancake and egg breakfast follows the event.

For about a month, students have huffed and puffed their way through hour-long after-school workouts like the one Tuesday at Scuola Vita.

Levi said he was a little scared for the race, since he has not done something like this before. Dominick had no mixed emotions, not missing a beat when asked what he was looking forward to the most: “Breakfast – and the medal.”

Jonagan played the part of drill sergeant on Tuesday, standing atop a grassy hill outside the school’s front entrance.

A long-distance runner himself, Jonagan said introducing the students to the sport was about more than just physical fitness. It also served to reinforce a message of self-discipline and determination that’s preached in the classroom, he said.

“You learn that kind of naturally as you learn to be a long-distance runner,” he said.