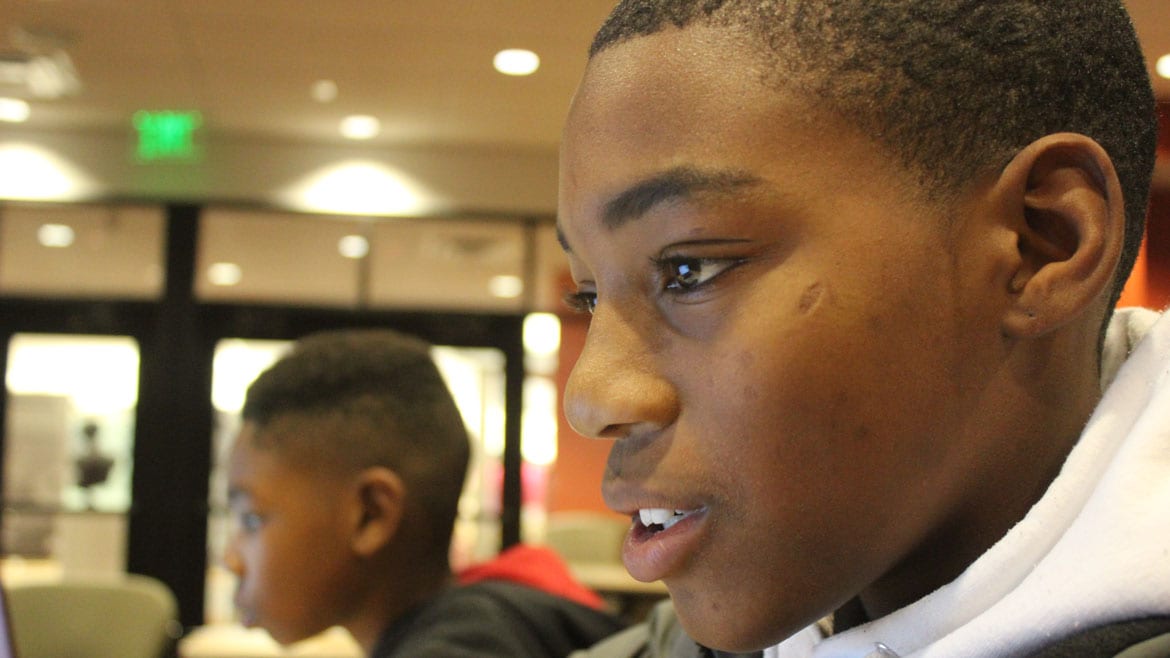 At the Google Fiber space on State Line Road Tuesday morning, students from several local schools sat at laptops, trying to get the character Elsa from the movie “Frozen” to ice skate in a certain pattern. It looked like they were playing a computer game, but really they were participating in an international effort to teach computer programming skills.

It’s called the Hour of Code, and it’s part of National Computer Science Education Week. Students all over the world are using tutorials provided by the nonprofit Code.org to learn the basics of computer programming. In this group’s tutorial, students dragged and dropped blocks of code that told the Elsa character where to skate.

Of course, this is a basic lesson in coding. The idea isn’t to immediately jump into learning programming languages like HTML or Javascript but to learn the thought process of computer programming.

Vanessa Steger is the STEM (science, technology, engineering and math) coordinator at Cristo Rey High School. She teaches one engineering class and coaches the school’s robotics club. She said these basic tutorials teach the students how to think like coders.

“The beginnings of programming are just logical and step-by-step thinking, and the dragging and dropping helps you connect that you have to tell the computer what you want it to do for each step,” she said. “It kind of makes you break it down in your mind.”

Students used tutorials from Code.org at the Hour of Code events. (Photo by Bridgit Bowden/Hale Center for Journalism)

Malcolm Strickland, who works for KC STEM Alliance, said that the tutorial seems like a game for the students, making logical thinking seem fun.

“We wanted it to be easy and a good introduction to coding for these students,” he said. “Because once you give it to them, they’ll pick it up like wildfire.”

Coding is an important skill that can lead to huge career opportunities for students. But, according to data from Code.org, only 2.4 percent of college graduates earn degrees in computer science. The goal of the Hour of Code is to get more people interested in computer programming.

At Kansas City’s Bluford Branch library on Wednesday afternoon, students used a similar Code.org tutorial that used characters from the popular game Angry Birds. The goal was for students to write a program that could get their characters from one end of a maze to the other.

Andrea Ellis from the Kansas City Public Library supervised the students at the Hour of Code event. (Photo by Bridgit Bowden/Hale Center for Journalism)

“One of the things I love about it is that there’s no penalty for being wrong,” Ellis said. “You just reset it, and you try it again.”

That’s exactly what happened when 7th grader William Hyler tried to get his program to work. He discovered that his code was missing only one line, so his character kept running into the maze’s wall. But after a few more tries, he got it working. “It really makes you think,” he said.

Ellis said one of the goals of the Hour of Code is to make coding accessible to everyone. The tutorials are free online and understandable for all ages.

“The biggest thing for me is to get people to understand how easy it can be to just start coding,” she said.

Ellis said she hopes the students continue to be interested in coding, and her department at the library can help them do that. Ellis runs a digital media lab at the library that has computers, video cameras, and even a 3D printer that kids can learn about and use.

“It’s all about helping youth transition from being consumers to being creators,” she said.