Development Site is at 1650 Broadway 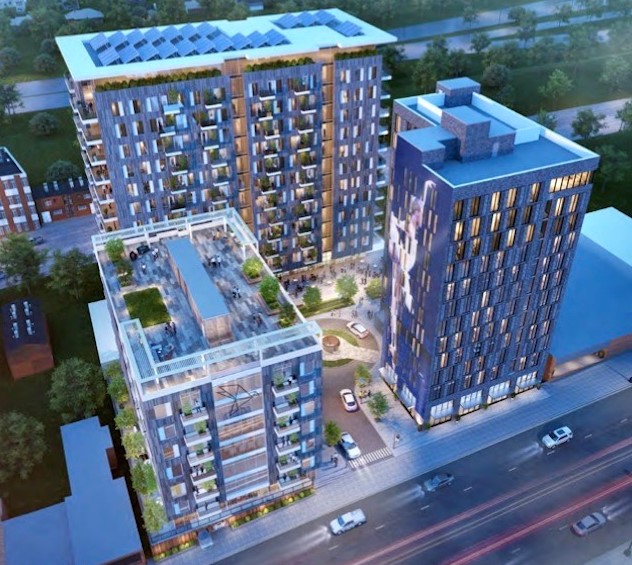 Mashburn Development is proposed a hotel and apartment project at 1650 Broadway just west of the Kauffman Center for the Performing Arts. (Courtesy | Clockwork architecture)
Share this story

An ambitious $100 million redevelopment plan that calls for three high-rise apartment and hotel buildings to be built across Broadway from the Kauffman Center is being pursued by Mashburn Development.

The proposal calls for two residential buildings – one seven stories, the other 12 stories – totaling 220 units, and a 12-story, 220-room hotel to be built at 1650 Broadway. A parking garage would be located beneath one of the buildings

If successful, the project would be the largest economic development spinoff near the Kauffman Center for the Performing Arts since it opened in 2011.

A plan to build a UMKC Downtown Conservatory south of the Kauffman collapsed two years ago, and the proposed Hotel Bravo! luxury hotel east of the performing arts center is facing an uphill battle at City Hall.

Mashburn Development is operated by Dave Mashburn, who has previously worked in senior development positions for Bass Pro and John Q. Hammons Hotels and Resorts in Springfield. He now lives in Lee’s Summit.

Clockwork architecture has been spearheading the development plan at 1650 Broadway for two years. Christian Arnold, a principal with the firm, said officials at the Kauffman Center support the proposal.

“They were excited to see such high-quality development on that side of Broadway,” Arnold said.

“Obviously, this is a big attraction in Kansas City and to capitalize on the public investment there by creating more density to go along with the convention hotel is good.”

Clockwork is an architectural firm based in the River Market that’s designed such notable downtown buildings as the Second and Delaware apartment project now underway, and the renovation of the Lead Bank building at 1801 Main.

Arnold, who also is serving as Mashburn’s spokesperson, said the developer is seeking an operator for the proposed hotel and is vetting potential developers for the multi-family component of the redevelopment plan.

If successful, construction would start sometime in 2020.

It would dramatically change the feel along the west edge of Broadway, which is currently mostly one- and two-story industrial-style buildings.

Arnold said the location is ideal for a taller residential and hotel development. He also said the project is outside the height restriction zone established for the viewshed south of the Kauffman Center.

“The views are unparalleled with the skyline and the West Bottoms,” he said.

The Clockwork site also is amid the so-called “Denny’s” development site on the west side of Broadway controlled by Copaken Brooks.

Copaken Brooks, a big downtown developer, has long considered that location, named for the restaurant currently there, for a potential major office-oriented project.

A preliminary planning document filed with the City Planning Department indicated the developer would be seeking incentives for the project. The project is being reviewed currently by the the Kansas City Economic Development Corp.