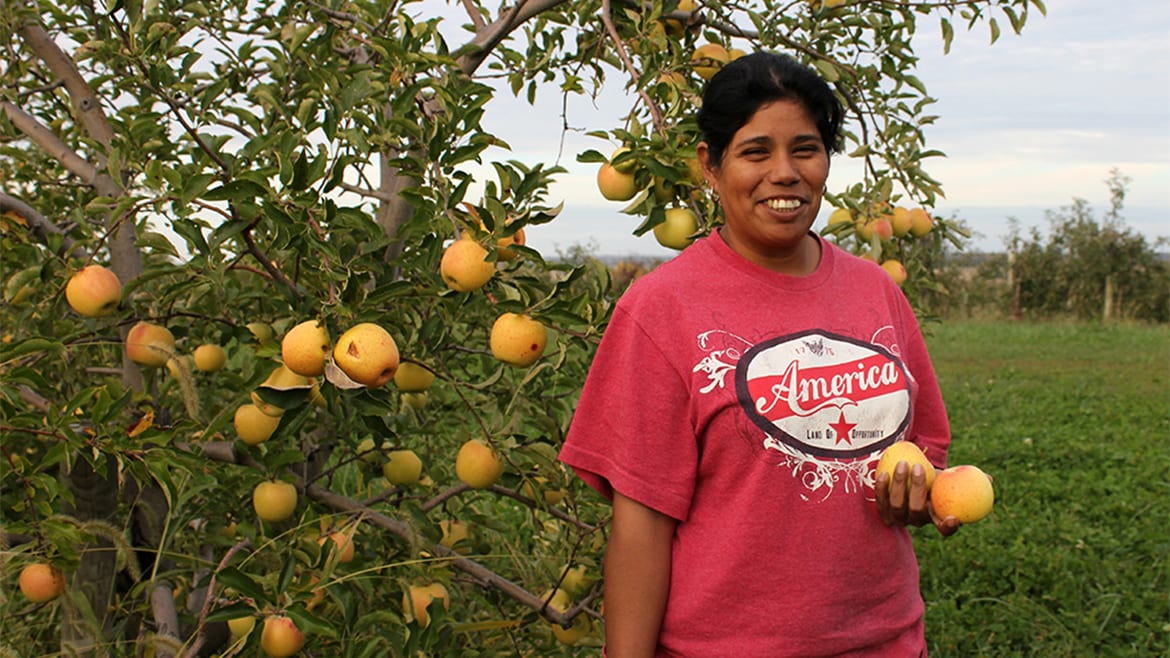 On a warm October afternoon Veronica Jaramillo walks through rows of skinny apple trees on the orchard where she works as the sun sinks behind rolling Missouri hills.

The 30 year-old migrant farmworker reaches into a tree on the Waverly, Mo., orchard, and in one fluid motion, picks a Golden Delicious apple.

“I don’t like picking the Golden,” laughs Jaramillo. “They’re real delicate and you can bruise them with just your fingertips.”

Jaramillo lives in Florida and came to Missouri with her mother Maria, two teenage sons and her husband to work the apple harvest. Like most migrant farmworkers, Jaramillo and her family traveled throughout the country picking crops before settling for two months in Missouri for the apples.

Each year thousands of migrant farmworkers pass through the Midwest to plant and harvest many of the crops we buy in the grocery store. The list includes pumpkins in Illinois, sugar beets in Minnesota and strawberries in Wisconsin. Most fruits, nuts and vegetables that must be picked by hand is likely harvested by a migrant farmworker.

There are about 3 million migrant and seasonal farmworkers in the U.S., according to the 2007 U.S. Census of Agriculture. But despite their essential contribution, many migrant workers still struggle to obtain a full education and basic healthcare services.

According to the National Agricultural Workers Survey, 50 percent of these workers lack proper documentation. A quarter of themlive below the poverty line and 41 percent completed only their primary education.

Stephen Borders, program director at United Migrant Opportunity Services, has been working with migrant workers for more than a decade to connect them to housing services, legal aid and Head Start programs. He says the majority of the people he works with make just $5,000 to $10,000 a year. But what concerns him most is their social isolation.

“They’re anonymous,” Borders said. “There’s really no good way to identify them and track them because they’re sort of this hidden society that is just working in the fields.”

And their work isn’t easy. After waking up at 5 a.m. to get her kids to school, Jaramillo works from 7 a.m. to 4 p.m. climbing up and down a ladder picking apples and filling a bag that can weigh around 60 pounds. She fills giant crates, about the size of a large bathtub, and is paid just $13 per crate.

“Right now it’s cold, it’s rainy and there’s days we don’t want to get up,” Jaramillo said. “But it’s got to be done. We have to support our families.”

For Jaramillo, working as a migrant farmworker runs in the family. Her parents, both Mexican immigrants, raised their children traveling from one crop to the next. At 13, Jaramillo began working in the fields part-time. When she didn’t complete high school, seasonal farm work became a familiar and steady way to earn an income. Her mother Maria, now 57, has worked in the fields for 35 years and remembers raising a family while constantly on the move.

“One year when we left from Florida for Michigan, we couldn’t find a house to live in so we lived out of the car,” she says in Spanish. “It was difficult, but that’s the life of an immigrant.”

At the end of the season, because there is less fruit on the trees, Jaramillo estimates that she fills around five crates a day, netting $65. That works out to less than $8.50 an hour.

“A lot of people just go to the stores and buy a bag of fruit and don’t know how it gets picked,” she says. “We pick it. We pick out there in the rain and the cold weather.”

After the apple harvest, Jaramillo plans to return to Florida where she’ll try to find a more established job for the winter. If she can’t find anything she’ll work picking citrus, even though the pay is poor and the temperatures can be scorching.

This season in Missouri has been good to her, she says. Her son made a best friend at school and the free housing was a huge financial benefit. If all goes well, both Jaramillo and her mother say they’ll will be back next year.