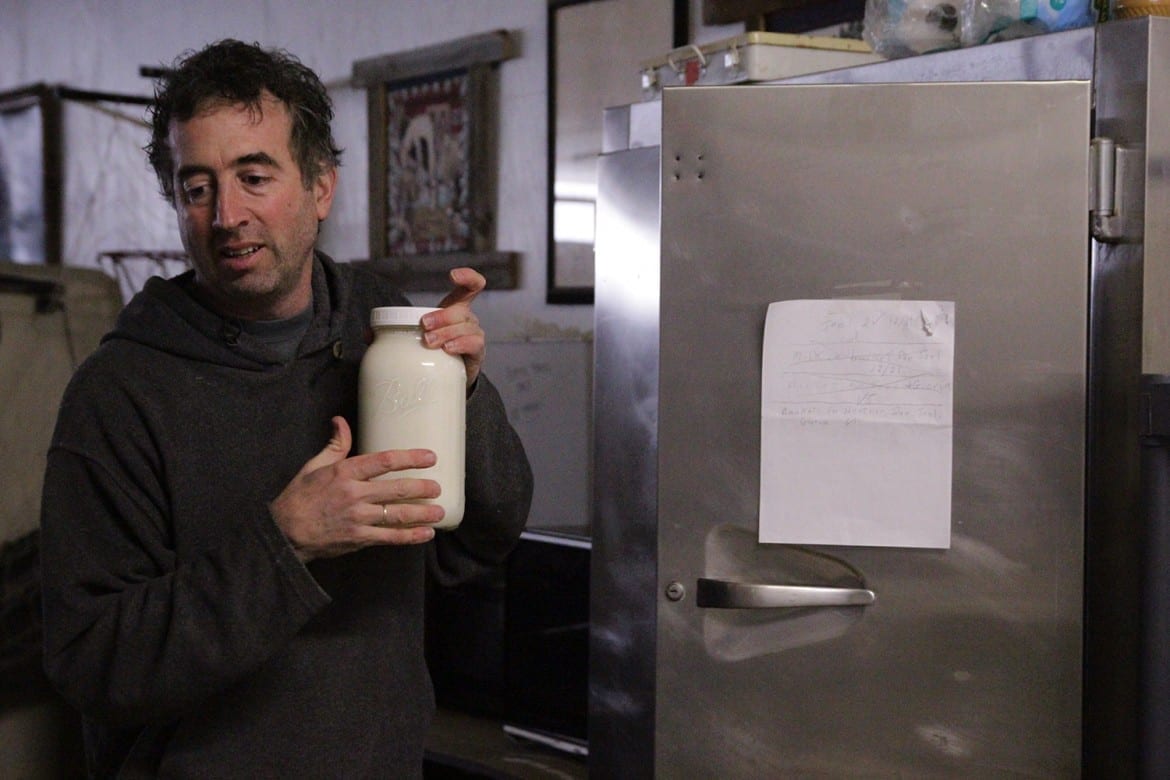 Joel Gruver is the milkman for a group of raw milk drinkers in Macomb, Ill. Every Sunday, he makes a two hour trip to pick up 12 gallons. The group has been active since 2011. (Abby Wendle/Harvest Public Media)
Share this story

The federal government banned raw milk sales across state lines nearly three decades ago because it poses a threat to public health. The Centers for Disease Control, the American Academy of Pediatrics, and the American Medical Association all strongly advise people not to drink it.

Individual states still control raw milk sales within their borders. And despite the health warnings, some Midwestern states have recently proposed legalizing raw milk sales in order to impose strict regulations on the risky – and growing – market.

Raw milk has become popular in recent years as part of the local food movement, with an estimated three percent of the population drinking at least one glass a week. Many of its fans are fiercely passionate about the benefits. They say they buy raw milk because it doesn’t contain the growth hormone rGBH, they like the taste, and they enjoy having a direct connection to the food they eat.

Holly Stovall, a raw milk consumer and advocate from Macomb, Illinois, serves it to her family as their source for omega-3 fatty acids, and vitamins.

“I like having a relationship with the people who are producing the food I put in my body,” Stovall said.

But raw milk is particularly fertile for germs. By definition, raw milk is not pasteurized — the process of heating milk to 161°F for 15 seconds to kill harmful bacteria like salmonella, E. coli and campylobacter. Milk contaminated with these bacteria does not look, smell or taste different from milk that’s safe to drink, but it can lead to severe illness.

Dr. Robert Tauxe, the deputy director of the foodborne, waterborne, and environmental disease division at the CDC, says that children, the elderly, and pregnant women are most at risk. And no one is immune.

“Healthy people of any age can get very sick or even possibly die if they drink contaminated raw milk,” he said.

Warnings from federal health regulators don’t address the reality that states have citizens determined to drink it.

Bob Ehart, senior policy and science advisor at the National Association of State Departments of Agriculture (NASDA), has been tracking raw milk policy in all fifty states for the past decade and says more and more states are legalizing its sale.

According to their most recent survey, conducted in 2011, NASDA reported that raw milk sales are legal in 30 states, with a variety of restrictions on how exactly it can be sold. Twelve, including California, Pennsylvania, and Utah allow raw milk sales in retail stores. In Missouri, Kansas, and Nebraska, customers have to go to the farm to buy it. And in Colorado, consumers enter into a legal contract with the farmer in what’s called a cow-share – a CSA-style operation in which consumers buy a share of a farmer’s cow in exchange for raw milk.

The CDC has been monitoring the move towards broader legalization and recently reported a corresponding increase in the number of illnesses attributed to the product – up fourfold from years past. From 2007 – 2012 there were 81 outbreaks reported – an average of 13 per year that led to nearly 1,000 illnesses and 73 hospitalizations. From 1993-2006, there were just 3 outbreaks a year reported.

The greatest jump was in outbreaks of severe diarrhea, often the result of drinking raw milk tainted with campylobacter-infected feces. Dr. Tauxe said the jump should serve as a reminder that no amount of regulations make raw milk safe.

But NASDA’s Bob Ehart suggests that some states may not be legalizing raw milk sales to condone it, but because legalization may give public health agencies the power to regulate a market that might otherwise exist underground.

“Some would say that it would be worse if there’s nothing on the books that allows the agency to do anything,” he said. “This at least allows them to do something if there’s an exposure level that affects public health.”

Towards stricter regulations in Illinois

The battle over raw milk regulation is raging in Illinois. Despite being illegal, raw milk sales in the state have grown to dozens of dairies supplying nearly half a million customers.

Joe Zanger has three brown and white Guernsey cows that produce up to 30 gallons of raw milk a day. For the past few years, he’s been selling it by the gallon, in glass mason jars, to a growing number of customers living in Quincy, Ill., the city down the road from his dairy.

Zanger says he earns a few hundred dollars a week from the side business – enough to pay for animal feed, vet bills, and milking barn maintenance. He believes that one day, it could turn into a profitable venture.

“This is something that I can maybe grow a little bit,” he said. “If I pick up more customers and buy more cows and just keep recycling that money.”

When Illinois became aware of the growing market, the health department proposed rules that would technically legalize raw milk, but impose strict regulations on the industry. Similar to other states in the region, sales would be limited to the farm.

Farmers would also be required to place a warning label on the product, sell it within five days of milking, and keep records of who they sell to. By keeping track of where raw milk flows, public health officials say they’ll be able to more effectively respond to outbreaks, if they happen. But farmers complain it’s an unnecessary headache.

When it comes to the milking operation, the rules mandate that all farmers keep their dairy cows “free from dirt,” routinely have their milk tested for harmful bacteria, and upgrade their infrastructure to have an easily cleanable milking barn, proper plumbing, and a separate milk house where the product is stored in a refrigerated, stainless-steel tank.

The regulations proposed in Illinois are currently on indefinite hold. Legislation to open the market in both Iowa and Indiana was proposed in 2013, but stalled in committee.

The proposed regulations in Illinois have garnered fierce resistance from raw milk consumers and producers who see them as an attack on small businesses and personal freedom.

“The free market has taken us so far already, why not just keep letting it go?” asked dairyman Joe Zanger. “If you come out to my farm and you see something you don’t like that makes you not want to buy my milk, you have every right to say no thanks. If everything looks appropriate, why can’t you buy it?”

In the absence of legislation in Illinois, producers like Zanger are left wondering if they’ll have to pay for expensive upgrades in the near future, or worse, be shut down by regulators.

For now, Zanger continues to sell 40 gallons a week of raw milk and cream to his customers. Even though it’s illegal, the thirst is there, and Zanger says so is his commitment to quenching it.