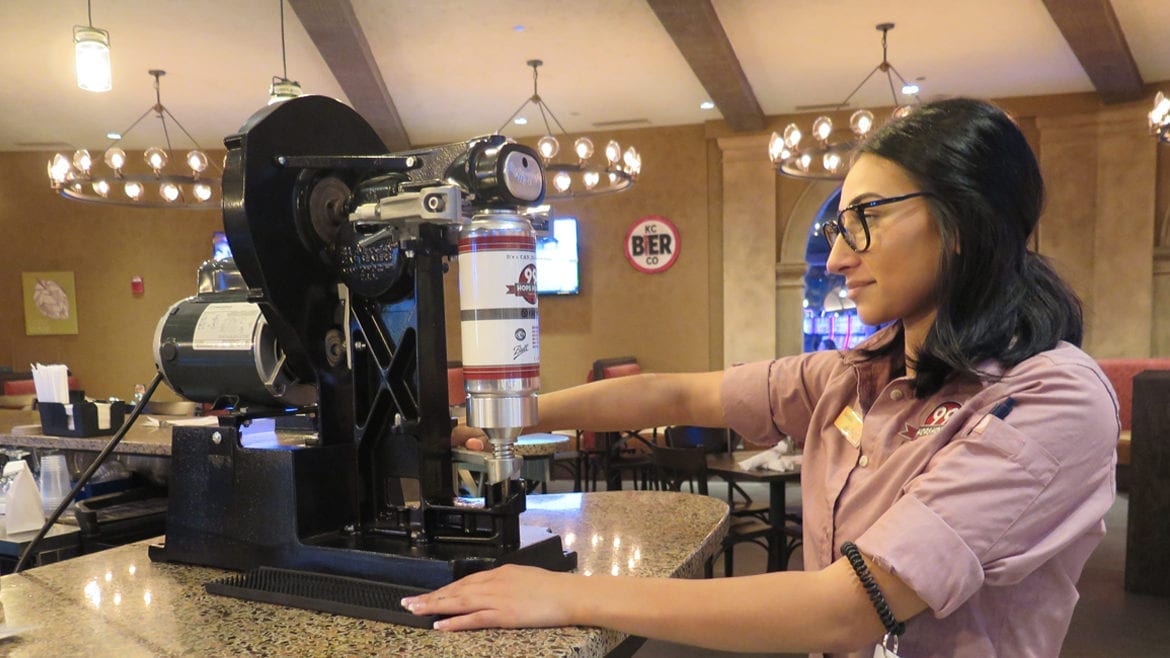 99 Hops House has added a crowler into the mix. (Pete Dulin I Flatland)
Share this story

The third annual invitational Festival of the Lost Township is slotted for Saturday, Sept. 16. in Raytown (62nd Street and Raytown Road). The event, hosted by Crane Brewing Company, features numerous craft brewers from across the U.S. and local homebrewers, plus area distilleries, cideries, meaderies, wineries, kombucha makers and other food and beverage artisans.

Andrew Carrales, co-owner and head of sales and marketing at Vanessa House Beer Company, shared some background on the Oklahoma City-based brewery and what it will bring to the festival.

“We are bringing our flagship beer the 401(K) Cream Ale,” Carrales said. “It gets its name from the company’s initial funding source. It’s our refreshing, crushable beer.”

Vanessa House will also bring its newest release, the Broken Tile Double IPA. The name is inspired by a 15-year-old story of an old roommate refusing to admit to kicking in the bathroom tile after a breakup.

“Lastly, since this is right at our one-year anniversary, we will be bringing an anniversary beer,” Carrales said. “It is an imperial cream ale with lactose, vanilla, pineapple and coconut.”

The brewery was launched by five guys with homebrewing roots.

“We like to play around with most styles honestly,’  Carrales said. “We have an eclectic love of styles. Our releases so far have lived on the maltier side of life, but we are looking forward to doing some sours and more IPA styles.”

Currently, Vanessa House only distributes in Oklahoma. The Festival of the Lost Township is a prime opportunity to try a taste of what a 401(k) can fund.

The team from Vanessa House will be pouring at the Festival of the Lost Township in Raytown. (Courtesy of Vanessa House)

The inaugural Hip Hops Hooray Music and Beer Festival takes place from 2 to 6 p.m. on Aug. 26 at The DeLeon Event Space and Chapel (3235 Gillham Plaza). Co-founded by Woodie and Abbie Bonds and venue owners Eric and Jodie DeLeon, the festival focuses on craft beer and hip-hop music. According to Abbie Bonds, her husband Woodie created the festival to offer “something a little out of the norm.”

“It is his dream scenario to have a venue that would be able to do this on a regular basis,” she said. “We thought this might be a good trial run to see our community receives the idea.”

“We will also have a few supportive breweries from outside the Kansas City community at this historic event space,” Abbie said. “Together, [they] show that diversity in the way beer is made, at home or commercially, doesn’t always make a difference in the quality.”

A portion of profits from the event will be donated to Little Warrior Princesses, a charity that provides gas and food gift cards to families with babies in area neonatal intensive care units.

99 Hops House, a taproom in Argosy Casino, installed a crowler machine las week. A crowler is a 32-ounce can that can be filled at the tap with any beer of choice. The can is sealed by a bar-top crowler machine that creates a seamed lid.

“We are able to can all of our 92 drafts,” said 99 Hops House manager and certified cicerone Eric Flanagan. “Crowlers hold beer better in a refrigerator than growlers. They are a better receptacle to fight oxidation.”

Customers may fill a crowler from a rotation of 28 beers on tap at the self-serve beer wall. A bartender can also fill the crowler with other beer options available behind the bar. The bartender seals the crowler and marks the contents on the side of the package.

Speaking of Grains & Taps, the taproom created its own holiday, 816 day, in honor of the date and area code. They will have 24 taps of beer from the 816 area, including Boulevard Brewing, Crane Brewing, Martin City Brewing, and Kansas City Bier Company.

Hop Quiz – Space Edition zooms over to Boulevard Brewing’s Tours and Rec. Center (2534 Madison Ave.). Test your celestial smarts with trivia about outer space. Advance tickets ($9) include entry to the game and two draft beers. Prizes include not only beer, but also special space swag.

The Tours and Rec. Center also offers eclipse specials from Thursday through Monday. A Dark Side of the Moon flight ($15) includes four dark beers, an eclipse koozie, and a pair of eclipse viewing glasses. Or try a Dolce Moon Pie paired with a five-ounce pour of Dark Truth ($4).

Kansas City Bier Company will pour samples of its beer at all three Mike’s Wine & Spirits locations from 5 to 7 p.m.

Kansas City Bier Company will pour samples of its beers at Hops and Vines (8560 Maurer Road, Lenexa, Kansas) from noon to 4 p.m.

The Foundry (424 Westport Road) celebrates Duvel’s perfect 100 rating by Draft Magazine with Duvel 100 Night. The bar will serve 100 Duvel bottles throughout the evening. “We’ll have prizes for the 25th, 50th, 75th and 100th Duvel purchased along with other swag and fun things,” beverage director Randyl Danner said.

Brewery Emperial (1829 Oak St.) has NASA-approved eclipse glasses available for the first 20 people who come in and order a beer, just in time for its Sonnenfinsternis (solar eclipse) watch party. Behold the total solar eclipse at its peak, 1:08:51 p.m. with a beer in hand.