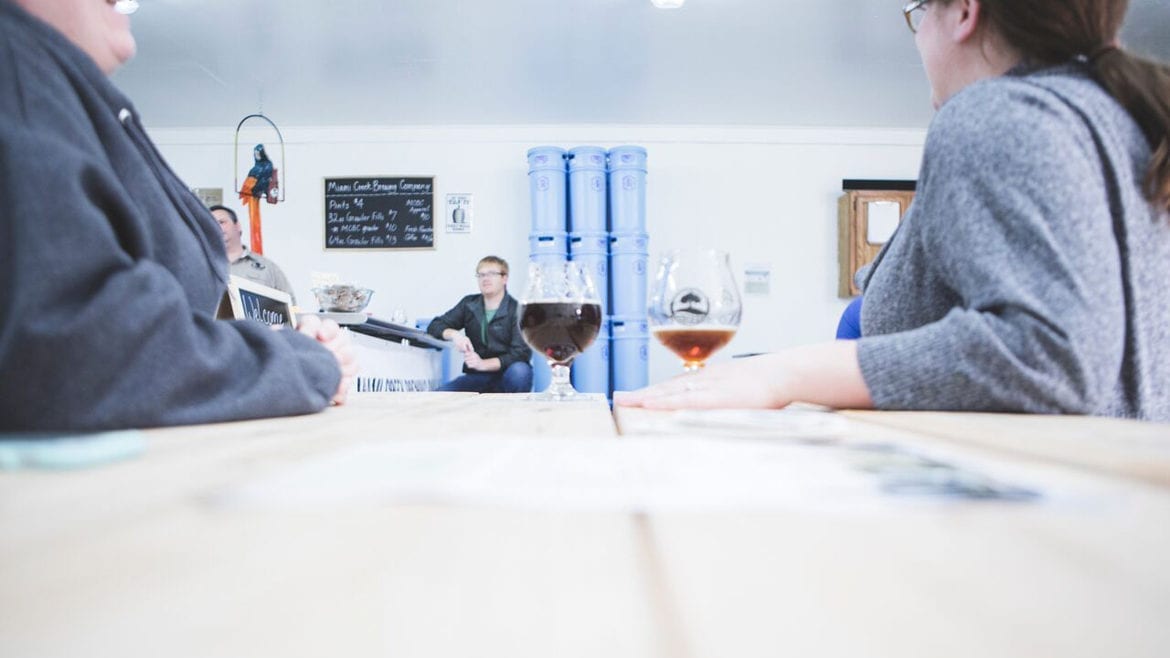 The taproom at Miami Creek Brewing Co. is about to get a host of new options. (Courtesy of Miami Creek)
Share this story

Owner and brewer Will Reece established Miami Creek Brewing Company (14226 NW County Road 14001, Drexel, Missouri) one year ago on the family farm. He has plans to expand by obtaining a winery permit and introduce new products. We caught up with Reece to chat about what’s he learned, and what’s next for his Missouri brewery. Hint: it’s not just beer.

Reflecting on the first year, what do you know now that you wish you knew before opening?

“We learned a lot in our first month open for business, and there was a learning curve. We didn’t expect the number of customers we received and had to add a couple guest taps and additional cooperage to handle the demand. We were still brewing on a small one-barrel system and hadn’t converted our seven-barrel system to electric yet. Hindsight being 20-20, I would have had more beer, more cooperage, and our 7-barrel system up and running before opening.”

Will Reece has a host of things in the works for Miami Creek Brewing Co. (Pete Dulin | Flatland)

Tell us about your most popular beers.

“Nutty Belgian, a Belgian Tripel brewed with walnut syrup, has been a big hit. It is limited since it is reliant on our walnut tree tapping and sap collection in mid-winter. Strawberry Rye, Honey Pale Ale and our Farmhouse Wheat were hits this summer along with our Lavender Saison. DC/DC, Double Coffee/Double Chocolate Imperial Milk Stout, while pretty limited, seems to be a crowd pleaser. Butternut Brown Ale has been a big hit this fall. I’m looking forward to the release of our barleywines and Pumpkin Pecan Imperial Stout.”

“We are in the homestretch for getting our winery permit. This will allow us to also produce wines, ciders and meads that will feature locally-grown ingredients. With interest from a few liquor stores, grocery stores, restaurants and taprooms, we are starting to shop for a distributor that is willing to handle our craft products. We are hoping by mid- to late-2018, we’ll also get an opportunity to start brewing with some Missouri-grown and malted grain, as well as incorporating more locally grown hops into our creations.”

What interests you in producing fruit-based products like cider and mead?

“We have roughly 250 fruit trees here on our farm. Most of these are apple varieties that were grown in the early days of this country for cider production by our founding fathers. We’re hoping for our first apple harvest next year. Along with apples, we have a few pear, peach, nectarine and plum trees. In my early days of brewing and winemaking, I made quite a few fruit-based wines and ciders. I’m excited to start doing this again.”

Touring Taps Brings Brew to You

Matt Madison, his brother Josh Madison, their cousin Adam Ligon and Corey Boddicker co-founded Touring Taps in summer 2017. Using a van, the guys bring the mobile beer taps to events. Ligon developed the initial business concept. With an upcoming wedding, he wanted to provide craft beer for guests via a box trailer outfitted with beer taps.

“Adam, Matt and I explored the logistics,” Boddicker said. “It appeared to be too expensive, and we shelved the idea. Later, we found the van for sale on Facebook. It made an appearance at a birthday party. People loved it, so we decided to create a business and start renting it out.”

Clients order a keg(s) of beer of their choice from a liquor store. Touring Taps has poured beer from Boulevard Brewing, Martin City Brewing, Stockyards Brewing and other local craft breweries, as well as domestic macro beers. Wine and mixed drinks are also available from the van.

The van was formerly used by Crown Distributors in Salina, Kansas, and still displays a red Coors logo.

Next year, Touring Taps plans to adapt its business for more indoor events by converting deep freezers into refrigerators with faucet towers and customizing them for a professional appearance.

“We will still use the van, weather permitting,” Boddicker said. “We are pursuing a liquor license that will allow us to sell by the pour at events around the metro area. We are also planning on adding additional vans with more capacity. Our vision is to have a fleet of vans that can service any size event.”

During KC Craft Beer Week through Nov. 12, BKS Artisan Ales (633 E. 63rd St., Suite 120) will release new beers on tap and in bottles and cans. Look for announcements on the Facebook page and website throughout the week.

More beer release information listed below in the calendar.

The Foundry at McCoy’s (424 Westport Road) hosts a Dogfish Head 60 Minute IPA, 90 Minute IPA, and 120 Minute IPA draft vertical, and will tap a keg of World Wide Stout at 6 p.m.

Through Nov. 9, Cinder Block Brewery & COOP Ale Works host a Rose Brooks Center donation drive and raffle at International Tap House (403 E. 18th St.). Donate needed items for a raffle ticket and receive half-off of the first Cinder Block or COOP beer, plus be entered in the grand raffle prize of tickets to a Chiefs game. Winning raffle ticket will be drawn on Nov. 9th, and you must be present to win. Needed donation items include full-size shampoo and conditioner, diapers/pull-ups, pet toys, bed pillows, twin sheets and blankets, cold and flu medicine, and full size body and face lotion.

Boulevard Brewing releases its latest Brewhouse One series, Imperial Stout Aged in Jamaican Rum Barrels (14.6-percent ABV). Public sales ($24.95/limit two four-packs per transaction) begin at 8 a.m. at the Tours & Rec Center (2534 Madison). The line begins at the southwest corner of the building by the Tasting Room doors. The Beer Hall will be open and offer five-ounce bottle pours of this featured beer for $4.