Flatbreads and Crowlers are Coming to East Brookside 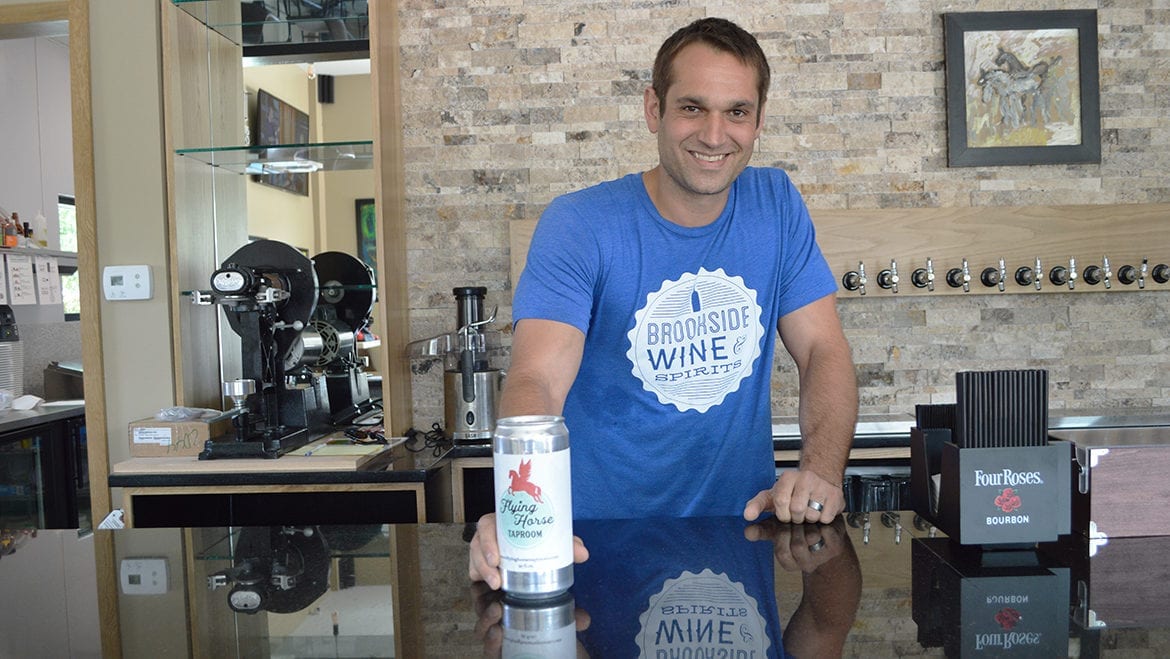 Trey Sabates has had a front seat to the explosion of the craft beer scene in Kansas City. And when the Flying Horse Taproom (600 E. 63rd St., #100) opens this Wednesday, he’s hoping to fill a few seats of his own.

“We’re trying to keep it local. There’s just so much good stuff in Kansas City right now,” Sabates said of his latest venture.

As liquor stores and grocery stores look for new ways to appeal to customers with attached bars and restaurants, Sabates is pursuing something different — a separate sister business. Sabates and his father Roland Sabates opened Brookside Wine & Spirits, which shares a parking lot with the Flying Horse Taproom, in 2012. Three years later, they expanded the liquor store’s local offerings with the addition of a “craft beer cave.”

“We didn’t have enough shelf space and weren’t going to be able to keep up with the local beer scene,” Sabates said.

The demand for local brews has coincided with a housing development boom along 63rd Street. Over the past two years, town homes and apartments sprung up around Heirloom Bakery, Unbakery, and BKS Artisan Ales in the neighborhood that’s been informally branded as East Brookside. Now, Sabates is hoping to meet the demands of locals.

“There’s so much happening here, and we just want this to be a neighborhood spot —a place where you can get a good, quality meal and catch the game.” Sabates said. 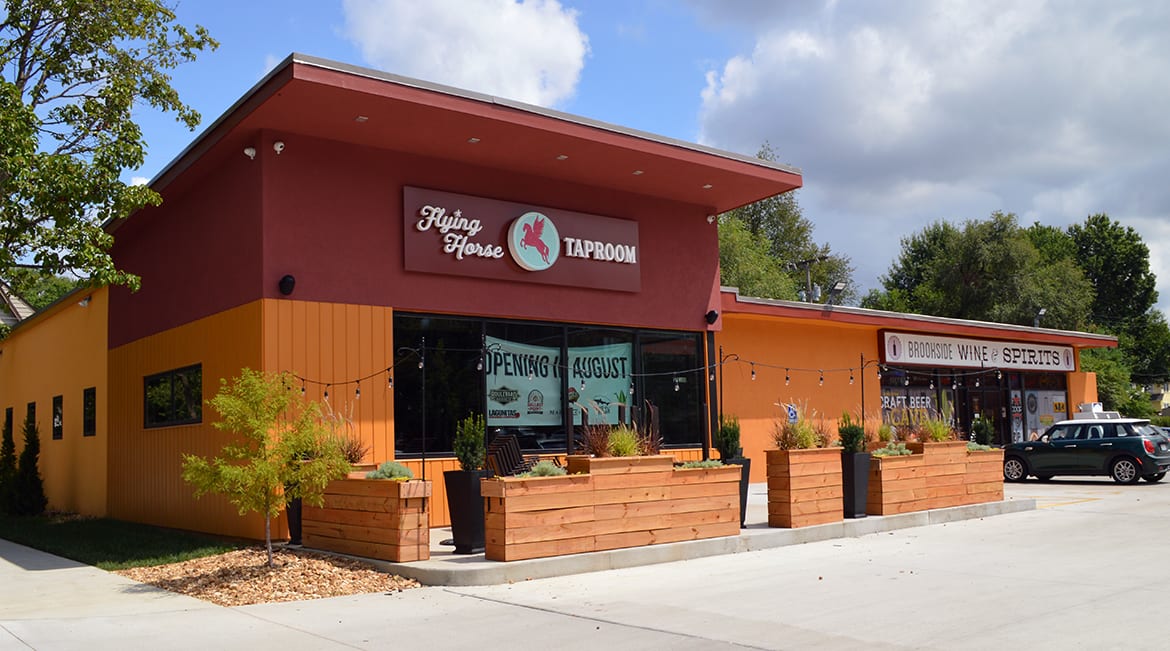 The logo and name of the Flying Horse Taproom is a nod to the Mobil station (and its signature Pegasus) that once stood on the corner. It took Sabates a little over two years to build out the taproom on the former gas station site. There were 32 tons of gas tanks that had to come out of the ground as well as engineering challenges to work through.

The blacktop in front has been transformed into an outdoor patio that will seat 25 people. Flying Horse Taproom has a separate entrance and isn’t connected to Brookside Wine & Spirits, although Sabates is planning on offering a corkage fee for folks who want to purchase a bottle of wine next door.

Sabates built the central feature of the taproom — a bar made with staves from four whiskey barrels. He’s also tabbed 4 Roses Bourbon as the well offering.

“I love whiskey and bourbon,” Sabates said. “We’ve got a high-end bourbon collection that I’m looking forward to bringing out once in a while.”

Behind the bar is a Lucky Elixir kombucha tap, Second Best cold brew coffee tap, 20 beer taps, 7 wine taps a crowler machine (beer can be canned and taken to go) and cocktails made with local spirits. Sabates points to a strawberry basil cocktail made with Restless Spirits’ Builders Gin, the Boat Drink (an ocean blue mix of plantation rum and musk melon liqueur) and a coffee drink made with Second Best cold brew and Five Farms Irish Cream liqueur. 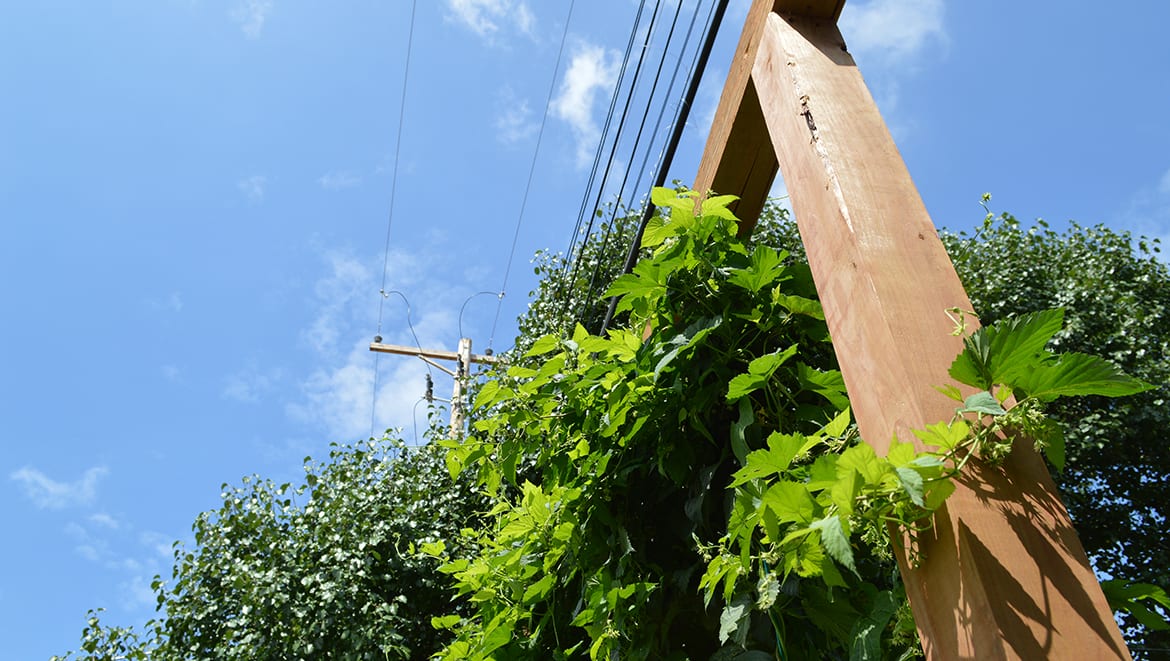 Sabates has numerous projects in the works. There are hop vines on a small patch of grass in back. He’s also started on a series of barrel-aged beer collaborations with local and regional breweries, including Free State, O’Dell and Cinder Block Brewery.

The Flying Horse Taproom will be open from 10 a.m. to 11 p.m. Tuesday through Sunday. Happy Hour will be offered from 3 to 6 p.m.

Like what you’re reading? Flatland reaches into Kansas City’s communities to uncover stories you care about – like this. Support your local journalism here.
Sponsor Message Become a Flatland sponsor
Tags: flying horse taproom