In the 1990s, a group of Kansas Citians shared a dream of creating a self-sufficient community run by and for LGBTQ women. Other lesbian communities existed in rural areas, but “city gal” Andrea Nedelsky wanted an urban oasis.

After buying a low-priced home in Kansas City’s Longfellow neighborhood, Nedelsky and partner Mary Ann Hopper eventually made their dream a reality.

Rejecting any reference to men, the neighborhood was spelled Womontown. The community eventually grew to encompass twelve city blocks.

At its height, Womontown counted 80 residents. It was advertised nationally in the popular magazine Lesbian Connection. People moved there from as far away as Hawaii.

But, for all of its rich history, memories of Womontown have largely faded in Kansas City. Many current residents have never heard of the community.

Documentarian Sandy Woodson seeks to change that. Her new work, “Womontown,” will premiere on Kansas City PBS on March 17.

Nedelsky and Hopper came up with the idea for Womontown after attending lesbian festivals and events and noting the sense of freedom they felt in these all-woman spaces.

In the 1980s and 1990s, lesbians in Kansas City often faced social stigma and harassment in public. “When you want to rent, you don’t say ‘hi, I’m moving in with my girlfriend or my partner or whatever,” Hopper says in the film. “So you kind of had to be covert about everything because of harassment.”

Womontown took intentional steps to create a safe environment. Residents walked their dogs at night to create more eyes on the street. They purchased old postal trucks and painted them purple, and “they would park those in front of people’s houses so that people wouldn’t know whether somebody was home or not,” Woodson says. “If somebody wasn’t home and you park that vehicle in front of that house, somebody might think that there’s somebody home and not break into the house.”

Another draw for Womontown residents was the cost of living. The Longfellow neighborhood afforded the opportunity for “cheaper rent, or even the ability to buy a house for … $20,000,” according to Hopper. “A three-story shirtwaist house was pretty amazing.”

Womontown residents helped one another remodel their homes, some of which were close to a hundred years old.

“What I thought was cool is, this is a way of improving a neighborhood without gentrifying it,” said Woodson. “These women weren’t coming in and fixing up the houses so they could sell ’em for a lot more money. They were fixing them up so they could stay there and have a community.”

The group promoted itself as racially diverse. “The womontown neighborhood is an ethnic mix of hispanic, black and white,” reads one flier. “Many of us are working class womyn. We love our ethnic diversity and seek out womyn of all races and cultures to become a part of Womontown.”

“Just having all that female energy. It was just very life affirming,” former Womontown resident Cyndi Moses says in the documentary. 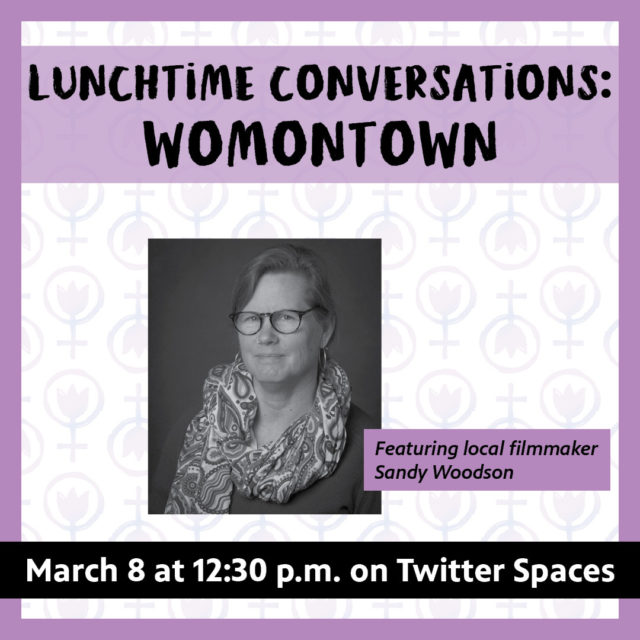 Join Flatland’s Lunchtime Conversations via Twitter Spaces! Feel free to listen in at this link, as we feature Sandy Woodson and her latest project, “Womontown.” The live chat will be moderated by Emily Woodring and begins at today 12:30 p.m.

Some depictions of Womontown describe an idyllic place. It was a community inhabited by “womyn-loving-womyn along with other residents such as elderly single people, young families of color, and hospice patients,” according to one out-of-town visitor in 1995.

Other representations paint a different picture. Some claim Womontown was a lesbian separatist community that rejected all contact with men. One person left Womontown because “I didn’t feel comfortable in a place that didn’t consider my son a first-class citizen,” according to a 1994 Kansas City Star feature on the community.

In the documentary, former resident Barbara Lea laughs off such allegations. “The rumor went around … that we were separatists,” says Lea. “I never thought that word was so bad until I started hearing it from these gay men who said we were separatists in the neighborhood. Like, so what, we got this little tiny piece of the world? And we don’t like to be around men too much.”

Despite the feeling of community, Womontown’s heyday only lasted several years. Eventually, the duties of running the community became overwhelming.

“You know, they had full-time jobs. This was a full-time second job,” Woodson says of group leaders. “They had hoped a lot of the women coming to the community would be interested in helping keeping it going as the organized effort. They found out that wasn’t the case.”

Although the newsletters and community outings eventually ended, a couple of original Womontown residents remain in the neighborhood to this day.

For others in the queer community, Womontown’s legacy lives on. “Drea said when they sold one of their properties in 2015, it was to lesbians who said they’d heard of Womontown.” says Woodson. “So, you know, it’s still out there.”

Woodson believes Womontown residents should be remembered for their determination. “They took some when it was offered to them, but they weren’t like, ‘oh, we can’t do this because we don’t have the money,'” she says. “They just decided, we’re going to do this. And they did it. And it was a struggle.”

This story first appeared on KCUR 89.3, a member of the KC Media Collective. Hannah Bailey is the spring 2022 podcast intern for KCUR Studios. “Womontown” will air at the Kansas City Museum March 10 at 6:30 p.m., followed by a panel discussion with former Womontown residents. The documentary will premiere on Youtube and Kansas City PBS on March 17 at 7:30 p.m. For more stories like this one, subscribe to A People’s History of Kansas City on Apple Podcasts, Spotify or Stitcher.