The excitement of the small volunteer church choir couldn’t be contained. After all, sitting at the piano keyboard was Jan Kraybill, who just hours earlier had received a Grammy nomination.

The enthusiastic applause that night in the sanctuary of the Village Presbyterian Church on Antioch in Overland Park was just one of countless congratulatory accolades from the Kansas City music community since Kraybill’s Nov. 20 Grammy nomination.

Kraybill is known in Kansas City – and beyond – for her dedication and her collaboration. The Best Classical Instrumental Solo nomination for her “The Orchestral Organ” also is the first Grammy nomination for a solo recording on the Julia Irene Kauffman Casavant Organ, the $3 million architectural and musical centerpiece of Helzberg Hall at the Kauffman Center for the Performing Arts.

That Kraybill honored her church rehearsal duties on such a momentous day is no surprise to those who know her.

“She rides a Harley-Davidson, but doesn’t consider herself daring,” says close friend Elisa Bickers, principal organist at Village Presbyterian Church on Mission. “She is a member of Mensa and holds the Fellow certificate from the American Guild of Organists, but would never dream that she’s superior to anyone. She is one of the most sought-after performers in the country, who could and has worked anywhere she ever wanted, but she absolutely cherishes her small church job and church home. The woman is a study in contrasts: Extreme brilliance housed in an unassuming, ever-warm soul.

“That her recording has been honored by Grammy nomination is no miracle, no gift – it’s what is genuinely deserved, and it shines a spotlight on someone that is incredibly special,” Bickers adds. “I’m thrilled that the rest of the world gets to see what we here in KC have known for ages: Jan is, simply put, a treasure.”

Kraybill’s love and talent for music first was evident the day an upright piano was delivered to her family’s small ranch house in Colby, Kansas.

Her father was an architect whose projects then included building Colby Community College. He also was an amateur singer and string bass player.

Her mother, a math teacher, was the first to sit alongside Kraybill to show her daughter middle C, or the middle note on a piano keyboard.

The next day, Kraybill didn’t use her mother’s guidance of finding middle C by looking at the pattern of black keys or the letters of the piano manufacturer’s name. Nope, she reached to the farthest left end of the keyboard to strike the lowest note. She then kept playing each key until she heard middle C.

Kraybill had the rare ability known as perfect pitch. She began piano lessons when she was 3 years old. Organ lessons began when Kraybill was 14 years old. Her music education in Colby was fulfilling.

“Because often in a small town you can get distracted by just the logistics of survival. We didn’t have a hard time surviving but it can be about ‘is the farm going to be productive?’ I am so grateful to the people in Colby who decided that there would be that kind of education musically, for us.”

Growing up, Kraybill listened to her father’s albums, which were mostly classical and instrumental. She listened to pop music on her small bedroom radio – often to replicate the songs of Elton John or Billy Joel on her own.

It was in high school where lifelong friend Liz Farndale first met Kraybill.

“I am delighted that she has been nominated for the Grammy,” Farndale says. “I think of Jan and myself as very normal people, and a Grammy as a celebrity thing, so it’s all rather amazing.

“I had never met a person who was so enthusiastic about her playing and who actually enjoyed practicing so much that she would do it to the exclusion of spending time with me and our other friend, Patricia,” Farndale adds. “To spend time with Jan you had to go to her practice times, listen and admire the skill – never a hardship as she was so talented – then grab time with her going for a Coke…I was a little jealous of the music if truth be told.”

However, music now allows the chance for the two friends to see one another when Kraybill’s performances take her close to where Farndale lives in England.

As a student there were inklings of what might be ahead for Kraybill.

She played a piano recital in England when she was in high school. She played Aaron Copland’s “Piano Sonata” for the famed composer during a festival at Kansas State University, where she earned a bachelor’s degree in music education (piano emphasis) in 1983. She earned a master’s degree in piano performance from K-State in 1985.

She was a middle school music teacher and church organist in St. Joseph before moving to Kansas City in 1986. Her resume here mostly includes jobs such as church organist, freelance accompanist, and private piano instructor.

For six years in the 1990s she worked in research and development publishing at Marion Merrell Dow. Initially hired as a temp worker, Kraybill rose through the ranks mostly because of the computer programs she created to make work more efficient and accurate.

In 2000, Kraybill earned her doctorate in organ performance from the University of Missouri-Kansas City Conservatory of Music and Dance.

She was formerly principal organist and later director of music at the Community of Christ headquarters in Independence. She is now its organist in residence. In 2012, she was named organ conservator for the Julia Irene Kauffman pipe organ at Kauffman Center.

Her job in the Kauffman Center is similar to the one at Community of Christ. She makes sure guest organists feel welcomed, and that the organs are maintained and ready for use – that would be the Kansas City metro area’s three largest organs with a total of 17,567 pipes.

In 2018, Kraybill decided to make a career shift and concentrate on being a solo and collaborative concert artist.

Originally, Kraybill was planning her latest recording to consist of works by American composers on the Kauffman Center organ. Then Victor Ledin, a producer at her record label, called to tell her market analysis determined that a transcription recording would sell better. Transcription pieces, simply put, are musical works originally composed to be performed by instruments other than the organ.

Kraybill, at first, had pause.

The producers were adamant, so with now only six months until the recording date, Kraybill got busy. She and her producers quickly and carefully curated the album with pieces Kraybill felt confident about playing on the Kauffman organ.

That was only the beginning – as it is with any of her performances, Kraybill invests countless hours to practicing, analyzing,  interpreting, and then more practicing.

“I try to learn a piece before I listen to it at all because if I listen to it, what I am afraid of is that I  will become unconsciously a carbon copy of somebody else’s interpretation,” she explains.

Her fascination with the organ, Kraybill explains, has everything to do with its complexity.

“Pipe organs are complex to build, complex to maintain, and complex to play,” she says. “It takes concentration and dedication and lots of practice. When everything works together, there is no better feeling. In this way, it’s very much like riding a Harley.”

Kraybill adores performing and, even though as an organist her back is turned, she depends on her audience.

“It is important to me especially to feel an audience breathing, or rustling,” she says. “If there is a lot of rustling, a lot of paper, a lot of shifting in seats, I know they’re bored. So I do something different as a performer. No, I don’t change the repertoire, but I try to make my performance more electric. If I hear stunned silence or like hardly any breathing I know that I got them with me.”

That wasn’t possible with the latest recording, which was made with no audience.

Kraybill says it’s important to be prepared, not only because recording is so expensive.

“My first take is always the best,” Kraybill says. “There is something magical about that first take when you are not thinking so much about recording equipment and, in my mind anyway, I am imagining a full house audience out there and I am playing to them. There is an electricity to that.

Kraybill says she loves how supportive the music community is in Kansas City. She is a big reason why it is, others say.

“It is always a joy to make music with Jan,” says Kansas City Symphony Music Director Michael Stern. “She is not only a terrific organist and a wonderfully collaborative musician, but also a great curator of the Julia Irene Kauffman Casavant Organ. More importantly, she is one of the most generous and lovely colleagues one could imagine. Whenever she plays with us — organ, piano, any keyboard part at all — she always makes an essential contribution to the success of our performances. And while the Kansas City Symphony cannot claim an organist position as part of our regular roster, Jan is absolutely a member of the family.”

“(The Grammy nomination) validates the quality of Jan’s work as a musician and the attributes of this pipe organ to both industry professionals and fans alike,” Donnelly says. “Jan is a great advocate for pipe organ music in general and for the Julia Irene Kauffman Casavant in particular. Kauffman Center for the Performing Arts couldn’t have a better ambassador for all things organ-related. We’re excited for her nomination, and will be watching the ceremony on Jan. 26.”

“The Orchestral Organ” also received Grammy nominations for best immersive audio album and producer of the year, classical, for Marina A. Ledin and Victor Ledin.

Kraybill is actually excited about a lot of things these days.

“I’m excited about the artistic renaissance that is happening in our city, and about the resurgence of interest in organ music and organ building across the country,” she says. “It’s a great time to be a musician, and I’m having a ball. I’m so grateful to be able to make music for a living. And of course, the Grammy nominations are wonderful icing on the cake.”

Jan Kraybill will be performing at the Kansas City Symphony’s Christmas Festival Dec. 20-23 in Helzberg Hall. Tickets are available at kcsymphony.org For more information about Kraybill, go to jankraybill.com 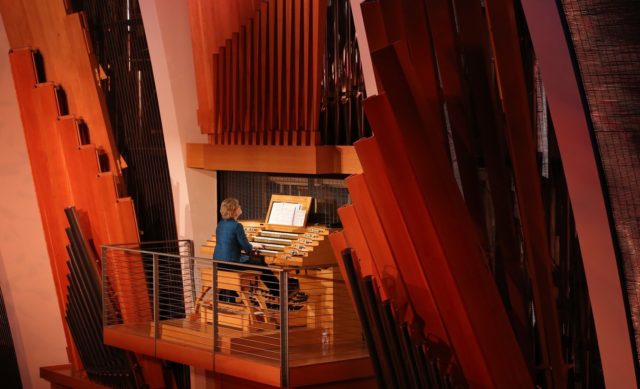