Yoli Tortilleria is Making Scratch Tortillas in the East Bottoms 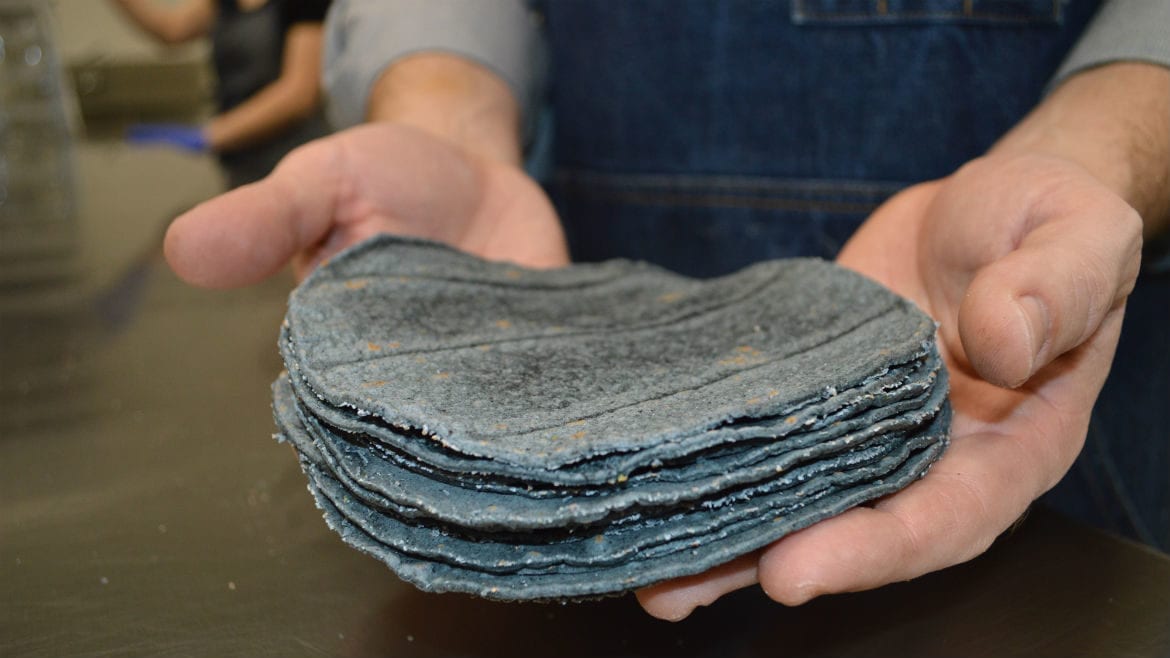 This is a love story….about tortillas. Marissa, left, and Mark Gencarelli are a husband-and-wife duo making corn tortillas in the East Bottoms. Mark grew up in the Kansas City area, his father started Movies at Home (a company poster hangs behind them). Marissa is originally from Sonora, Mexico, where her family ran a meat company (see the white work coat on the right). The couple met while studying abroad in Italy. After getting married and deciding to live in Kansas City, they discovered that they couldn’t find the kind of corn tortilla that both of them loved to eat.

Yoli Tortilleria uses non-GMO corn to make blue, red, and white tortillas. Their tortillas only have three ingredients: corn, lime, and water. The corn arrives on 2,500-pound pallets and is stacked high in the front room of their production facility.

The entire process for making tortillas is called nixtamalization. The corn is first soaked in water and food grade lime, which helps soften the kernel shells. The corn simmers in a large metal pot overnight before being transferred to small plastic baskets.

The corn in the basket is then rinsed by Marissa before being walked over to the grinder.

The rinsed corn is fed into a funnel that sits atop the grinder.

This is a closer look at the blue corn that will be fully cooked tortillas in about 15 minutes.

The corn is ground between a pair of volcanic stones. The two stones are from the Campbell Machine Shop in Santa Fe Springs, California. The Gencarellis spent three weekends at the shop learning how to grind corn, cook tortillas, and repair their own equipment.

The finely ground corn cascades down from the grinder and is caught in a metal bin.

The ground corn is then put into a mixer and becomes a wet dough known as masa — the building block of the tortilla.

Mark checks the masa (dough) by hand to make sure the consistency is right.

Mark next places the masa into a hopper, where it is rolled out on a drum. The masa is then cut into circles and drops onto a conveyor belt.

The cut circles pass through the oven three different times. Before each pass, the tortillas are flipped in an effort to achieve the same effect as cooking tortillas on the stove in a comal — a flat griddle traditionally used in Mexico. The oven-baked tortillas should have a little puff.

Yoli Tortilleria can make about 3,000 tortillas in an hour, using part-time help during big production days. The tortillas are stacked and allowed to cool before they will be bagged and taken to restaurants (Port Fonda, Brewery Emperial, Red Door Woodfired Grill, among them), around the city or to the Overland Park Farmers’ Market.