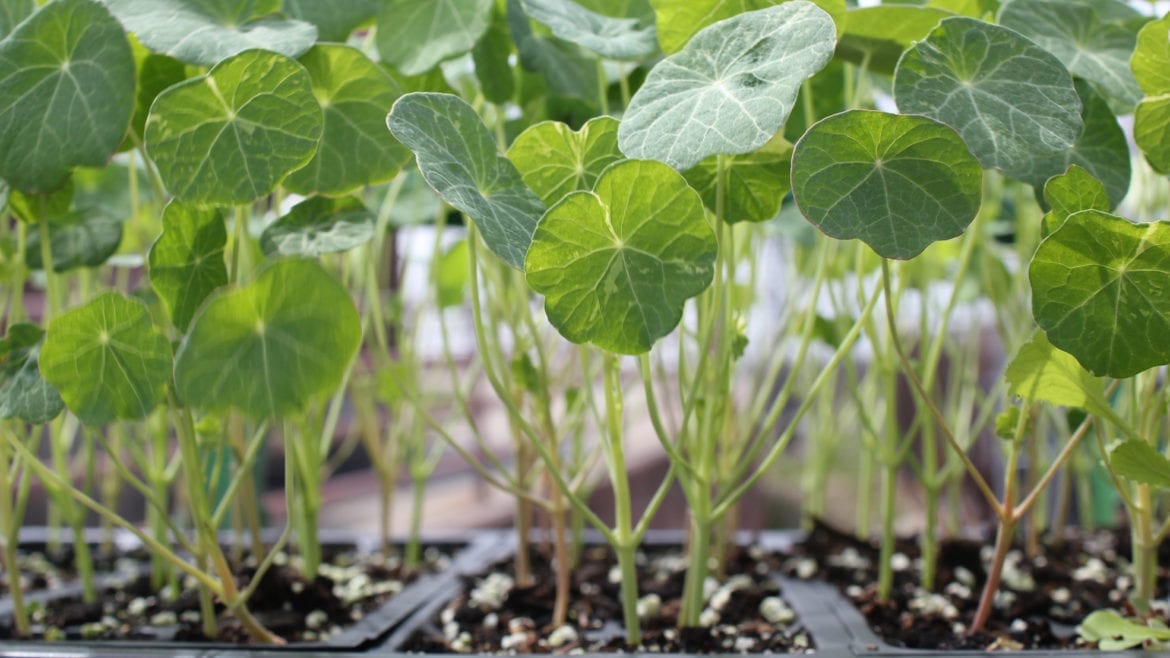 While there's still work to be done in the greenhouse at East High School, nasturtium has begun to sprout this spring. (Zoey Shopmaker | Flatland)
Share this story

It’s Saturday — the first warm day of spring — and there’s work to be done in the gardens at East High School in Kansas City, Missouri. Eric Person, owner of KC Aquaponics and a community partner with East’s agriculture program, is here with a friend to tend to the grounds just north of the school.  Outside it’s a moderate 67 degrees. But inside the greenhouse, it’s sweltering.

On long, knee-high tables, sprouts of elderberry, nasturtium and 30 other plants glisten amidst a small jungle of budding flora. Person leans in and scrutinizes the seedlings. Behind him, along the north wall of the greenhouse, tilapia, bluegill and catfish swim in separate tanks. Their wastewater travels through a series of filters, eventually providing key nutrients to the plants growing on the surface of the catfish tank. The process is called aquaponics.

In the balmy conditions of the greenhouse, it can be difficult to keep this delicate ecosystem in balance. Fortunately, Person is committed to seeing something grow.

As he sat on a railing near the school parking lot, Person spoke candidly about why he does what he does, musing on everything from his childhood to issues facing the black community in Kansas City.

Growing up, Person learned firsthand the value of self-sufficiency in a community facing socioeconomic marginalization. He remembers his grandfather struggling to find a job after returning from service in the Korean War. “It was like a slap in the face,” he said, looking off toward the chicken pen. In order to survive, his grandfather started his own business and relied heavily on gardening to feed his family. It was in that garden that a young Person learned the foundational skills that inform his work today.

“My family has always been a do-for-self, take-the-power-into-your-own-hands kind of family,” he said. “That spirit is what keeps me going.”

Over the past two years, Person has used his knowledge of aquaponics and small-scale farming to build his own aquaponics and garden installation business, all while helping resurrect East’s once-thriving agriculture program.

“I just want people to learn and empower themselves,” Person said. “Especially for a lot of black folks, we’ve been disconnected from food that nourishes us. We have the highest rate of obesity and diabetes and high blood pressure. I just want to combat those things and empower people to take it upon themselves to grow food.”

A Culture of Agriculture

East High School, with a student population that tops 1,100, is one of the biggest public high schools in Kansas City. Students hail from 42 different countries and speak more than 40 languages, making the school one of the most diverse in the region. Many of them live in areas with limited access to staple foods. In the communities where many of these students live, “having a garden is the norm.”

“A lot of districts east of Troost, you have pockets of communities where they depend on staple foods they don’t have access to. So they understand the importance of growing your own food,” Person said.

In the early 1990s, East boasted the largest Future Farmers of America (FFA) chapter in Missouri, according to current science instructor Zach McCullough. The school had functioning greenhouses and other facilities. But before the end of the decade, the Kansas City, Missouri, School District closed 30 buildings, including East, and the agriculture instructor — who’d worked in the district for more than 30 years — retired. With no one to run the program, “everything was left [in] mothballs,” McCullough said.

That all changed in the 2016-17 school year. Person, in collaboration with Dre Taylor and Males to Men — a community organization that helped found the Nile Valley Aquaponics 100,000 Pound Food Project — assisted East in restarting the program with 20 students participating in an after-school club. They were among the first to use the greenhouse since it had fallen into disrepair.

“Vermin were taking over. Electrical wire had been cut or chewed through. … So we had to completely take everything out, wash it down and essentially start over,” Person said.

Without a functioning greenhouse, it proved difficult to bring crops to harvest in the spring and summer. While Taylor shifted his focus toward Nile Valley, Person — having prior knowledge and experience with aquaponic systems — was able to keep moving forward. With the help of Jenna Wilkins, a member of Lincoln University’s Coop Extension, Person helped plan a garden in the lot behind the school.

In January 2017, the school received a much needed boon in the form of a $4 million grant from the Department of Elementary and Secondary Education. The money, spread out over five years, helped fund a number of new learning communities — including a full agricultural curriculum with two classes in the morning and afternoon. The students learn, among other things, about animal pathologies, caring for the chickens, identifying plants that are grown and the sales side of the agriculture business.

The after-school club has since transformed into an essential part of East’s curriculum, with more than 80 participating students and two paid summer internships to help keep the grounds in shape. Just north of the main building, the progress shows.

Despite some lingering disrepair in the greenhouse, Person and the students have managed to build a functioning aquaponics system and coax herbs out of the soil. Outside, in rows upon rows of raised garden beds, dill, radicchio, romain and a smorgasbord of other plants are sprouting in the springtime sun. Much of this harvest Person will keep to sell on his own, some the students will sell, and some they’ll take home to their families. In an adjacent fenced enclosure, a rabbit sleeps amid the chatter of chickens, ducks and a pair of turkeys. Soon there will be bees, too.

Growing a Movement at East

Outside of Kansas City, Person’s efforts with the high school have not gone unnoticed. After a Facebook post detailing his work went viral last year, he’s received inquiries from people all over America asking for help with their gardens. Earlier this month, Person was paid to fly to Atlanta to build an aquaponics system for Community Movement Builders — a black nonprofit creating sustainable self-determining communities through economic advancement and community organizing.

In many ways, Person’s relationship with East has been like that of the plants and fish in the greenhouse — symbiotic. He’s been able to build a growing business, all while providing workshops to students, and helping teachers rotate crops and experiment with different planting methods.

“He’s brought a passion about it that the students who work around him are able to feed off of,” said Andrew Killen, another instructor in the program. “He brings a lot of knowledge and information as far as aquaponics go — and provides a lot of practical skills that kids can pick up on.”

As for the future, McCullough believes strategic partnerships such as Person’s are integral to the program’s success. The school is hoping to have at least 150 students participating next year as well as becoming active FFA members. Killen and McCullough said they want to prepare their students “by providing lots of hands-on training with real skills they can use, as well as instilling respect for the agricultural industry.”

For Person, it’s about teaching people not just what’s in their food but how to assume a sense of autonomy and responsibility over their own food sources.

“I grow food to fight food insecurity and combat food apartheid,” Person said. “And food keeps us all connected.”

Zoey Shopmaker is a music and culture journalist, DJ, producer, rapper and co-founder of the UN/TUCK Queer/Trans Music Collective based in Kansas City.