Amid the heartbreaking artistic and economic fallout from the COVID-19 pandemic, the ongoing redevelopment of the old Kansas City Star building has been a bright spot.

Developer Vince Bryant of 3D Development has been forging ahead with a $98 million conversion of the historic structure at 18th Street and Grand Boulevard into a mixed-use development known as Grand Place. A new twist emerged recently when Bryant infused his plans with a grand artistic vision.

Bryant has obtained $2.4 million in sales tax breaks from the city’s Planned Industrial Expansion Authority (PIEA) for his Grand Place development. The tax breaks were granted after Bryant pledged to commission public art works, assign part of the building to serve as free artist incubator space for two years, and help establish a major arts festival with Grand Place as its hub.

The public art works will include four 9-foot chrome cubes, representing printer’s blocks, with letters that spell out STAR. The cubes are to be randomly positioned and displayed at different angles, as if they’d been rolled out like giant dice. This art project will require a call to artists and metal fabricators to create and install.

Plans call for the Grand Place redevelopment project to be completed in the fall of 2021.

The festival would be similar to the ArtPrize event that runs for 19 days every other fall in Grand Rapids, Michigan. ArtPrize attracts an estimated 500,000 visitors and awards $250,000 in art prizes, including a $200,000 grand prize, to artists from around the world. The 2020 ArtPrize exhibition was cancelled due to the pandemic.

The so-called hub of this plan, the former Kansas City Star building, is much beloved by journalists and folks who are into history and architecture.

The Star building opened in 1911 and an addition was constructed in 1924. After selling the building in 2017, the Star moved out of its longtime home and into a new newsroom in its green-glass press pavilion across the street on McGee Street.

If successful, Bryant’s art plans would further augment the well-established art vibe of the Crossroads. The once gritty Crossroads evolved into a regional arts district in recent decades, before getting slammed by the pandemic.

Bryant’s plan for an arts festival surfaced two years after Open Spaces 2018, a visual and performing arts exhibition that occurred in Kansas City during the summer and fall of that year. The city contributed nearly $1 million to the exhibition, which lost money and has been criticized for a lack of inclusiveness. 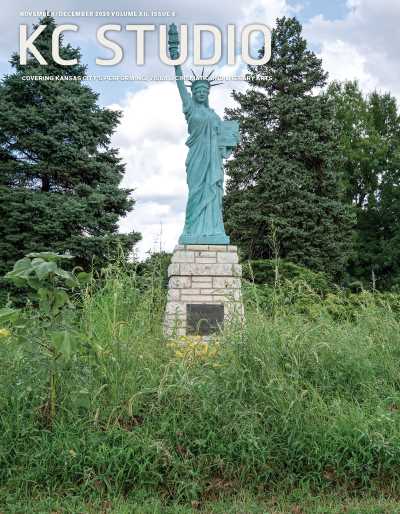 This article first appeared in the November-December issue of KC Studio. It is part of an ongoing content collaboration between Flatland and KC Studio.

Dana Knapp, president and CEO of the ArtsKC Regional Arts Council, said Bryant discussed the broad outlines of his Crossroads arts plans with her shortly before he went before the PIEA.

“Incorporating the arts into a redevelopment is always a fabulous idea from my standpoint,” Knapp said. “As far as how the building is outfitted, I can’t say I drilled down to that much detail, so I can’t really speak to that.”

Regarding the festival, Knapp said she supports “celebrating and engaging and lifting up our regional artists. Whether or not we’re ready for another festival or some sort of public art event depends upon what it is, how it’s conceived, who’s involved in the planning and how it is executed. It could be a wonderful bringing together.”

But Marissa Starke, executive director of the Kansas City Artist Coalition, said “a majority of the arts community doesn’t know about this, hasn’t heard anything from anybody affiliated with the project. I think its potential to be successful would be elevated by talking to the community and figuring out what the needs are.”

Starke said she was intrigued by the idea of an arts incubator in the old Star building.

But another arts festival?

“Art festivals and fairs were starting to fall off even before the pandemic,” Starke said. “We have several art fairs in Kansas City. They do not necessarily do a whole lot for local artists. I would really be interested to see their approach. By incorporating local artists and the arts community and arts agencies that are advocating for those artists, you will see higher turnouts.”

Sara Sonié Joi Thompson-Ruffin, a contemporary fabric artist and founder of the African American Artists Collective in Kansas City, said she was surprised when she learned about Bryant’s art plans for the Crossroads.

“I didn’t know anything about it,” she said. “Our focus has been maintaining a level of relevancy in this business right now. We’re in survival mode. We have canceled exhibitions. They don’t have COVID under control yet. It has placed a layer of uncertainty all over the world, particularly in the arts.”

And while Thompson-Ruffin said Bryant’s plans “sound marvelous on paper,” she would like to know more details.

“You have to understand that there are arts professionals in this community who were not invited to participate in Open Spaces,” she said. “Open Spaces was an unfortunate debacle. African Americans have been a positive contributor to the arts, on a national and international level. But we’re dealing with a racial situation, not only in Kansas City but in this country. Before people put a stamp on something, they need to be mindful. This is not a problem that is going to go away any time soon.”

Thompson-Ruffin said she and her colleagues have been working on ways to “best address the racial disparities, the educational disparities, and the financial disparities in this country as they pertain to the African American community. Any time he (Bryant) would like to sit down and have that conversation about how his project is going to enhance the African American narrative as it pertains to economics, education and equity, then we can have a conversation. We have these issues in the arts, and they need to be addressed.”

Knapp said she told Bryant “the most successful things in Kansas City, particularly related to the arts, have been very organic. As he proceeds and fills out his ideas and concepts, it would be in his best interest and the best interest of the community if he engaged the arts community and artists in his planning and setting his expectations.”

Knapp said Bryant told her he plans to “pull together some sort of community advisory group to help him navigate through the planning of the building, especially given the fact that, as I understand, it’s going to be community focused. I think that would be a great idea.”

Amy Kligman, executive/artistic director of the Charlotte Street Foundation, said she did not have enough information about the project to offer up public comment.

In response to a request for an interview, Bryant said in an email that he thought it was “a little early to talk about our ART plan as we haven’t formed the groups that will help us issue the call for artwork, offer free design studios or work with us on attracting an ArtPrize type of event for the City.

“We are excited about it all, but right now very busy trying to get our tenants signed up, financing and construction underway,” Bryant continued. “I would say it won’t be until the first of the year before we have time to put towards this, and we are about 14 months from opening, so plenty of time. Please reach out in early 2021, and we hope to be in a position to discuss some of our art programs.”