Get in, get your ramen, and get out

The much-anticipated Columbus Park Ramen Shop prepares to open its doors by defining its menu, style 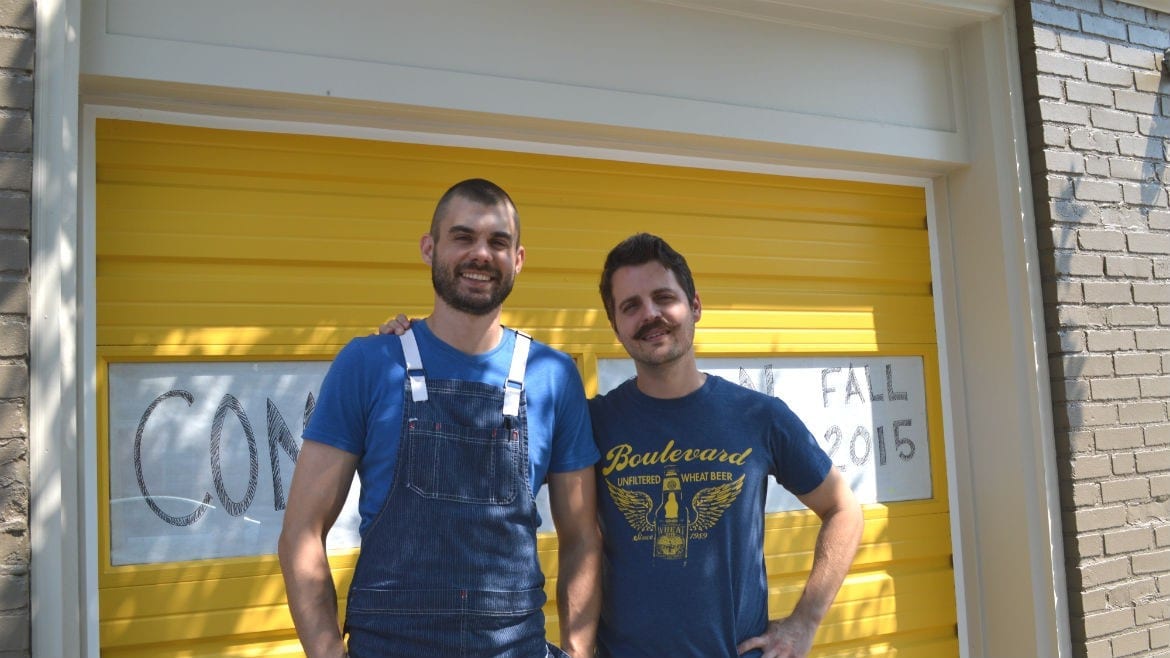 From left, Jon Ponzer and Josh Eans are developing the menu for the Columbus Park Ramen Shop in preparation of a Fall opening. (Photo: Jonathan Bender | The Recommended Daily)
Share this story

Despite its small size, Josh Eans knows that his latest venture comes with big expectations. He’s standing inside the 450-square-foot garage next to Happy Gillis Café & Hangout –the restaurant he owns with his wife Abbey-Jo Eans. A short hallway connects the luncheonette with the future home of the Columbus Park Ramen Shop.

“We want to keep things simple and streamline. We’re going to focus on doing one thing really well,” said Eans of the restaurant that will open this fall. “We wanted the ramen shop to have its own identity so we painted the outside of the building to show the old and the new side by side. We’ve embraced both.”

The garage and front door of the future restaurant space are bright yellow, color spectrum cousins to the massive schoolbus yellow Dewalt tool cabinet inside that will double as the server’s station. It’s part of a series of design touches – painted concrete floors and walls, and bare Edison bulbs — meant to acknowledge the fact that you’re eating in a converted garage, which previously housed Uncommon Stock, a soup company run by Todd Schulte and Tracy Zinn, the former founders and owners of Happy Gillis.

Construction on the Columbus Park Ramen Shop began in early June, shortly after the completion of the Eans’ successful Kickstarter project, which raised $41,100, and sparked a flurry of local eateries seeking crowdfunding support.

With the funds raised, they added a bathroom, air conditioning, and paneled the back wall with Hackberry wood, a tree native to Missouri. The three tables and a counter that runs the length of the northern wall are all made with live edge silver oak. Another counter will run along the exterior wall above a newly laid brick patio and beneath a crisscrossing series of string lights. In the coming weeks, Eans will hang pegboard on the interior walls for buckets filled with condiments (hot sauce) and utensils (chopsticks).

“We wanted to work in lots of natural, earthy elements,” Eans said. “We didn’t want to cover up too much, but it feels more modern than we expected.”

With the dining room near completion, Eans is working with Jon Ponzer on developing the menu. While he was a sous chef at The American, Eans hired Ponzer as a line cook. And when he purchased Happy Gillis, he asked Ponzer if he’d come on board to help at the sandwich shop and bring the concept for the ramen shop to life.

The Columbus Park Ramen Shop will have one item that is not ramen – a kimchi pickle plate – that can either be an appetizer or added to the bowl. Eans cuts and salts cabbage to make the kimchi, which currently adorns a sandwich at Happy Gillis. It’s then cured in a combination of sugar, garlic, ginger, chiles, and fish sauce.

“It’s the perfect overall condiment. You have sweet, sour, spicy, salty, and lots of umami. You also get that crunchy and texture,” Eans said.

The dinner-only spot will likely house four or five different bowls of ramen. The ceramic bowls are being designed and fired by sculptor Paul Mallory, who makes the coffee mugs for Happy Gillis.

“We’re working with what we had in the space. We’re sharing a kitchen,” Eans said of the decision to only open for dinner. “Both places need to run and we can’t do both at the same time.”

All of the ramen, with the exception of a vegan option, will come topped with a soft-boiled egg marinated in either a soy mirin (rice wine) sauce or the braising liquid from the chicken or pork. The egg will be warm with a slightly gooey yolk. The noodles will be fresh, sourced from Sun Noodle.

“I love chewy grains and I want the noodles to have that nice chewy texture,” Eans said.

One offering on the garage side will definitely be vegetarian – they’re considering a mix of shiitake mushrooms and miso and kombu (seaweed). The other ramen bowls will start with a clear chicken and dashi broth or a cloudy pork broth (tonkotsu) and seasonal vegetables.

“We’ve spent a lot of time dialing everything in. We’re serving it just the way we want you to eat it,” said Eans.

The clear broth will come topped with roasted chicken or a sweet Chinese sausage made by the Broadway Butcher Shop. The cloudy pork broth will be made with a combination of pork neck bones, trotters, and femur bones that are boiled for 12 hours.

“Coming from classical training, it goes against everything you know about making stock,” Eans said. “You leave the stock on high and boil it for up to 18 hours. All that fat and collagen and gelatin gets emulsified into this milky consistency. It’s got this crazy body that’s really interesting.”

The cloudy broth will either be seasoned with white miso or topped with roasted pork, potentially something like hog jowl.

“It’s this really interesting mix of soft Jell-o and sake,” said Eans of the peach-flavored Ikezo drink. “It’s like a sake Radler.”

On the non-alcoholic side, they’ll have Ramune soda – a popular soft drink in Japan, which uses a marble to seal the soda inside the bottle. And Eans is currently playing around with making a milky bubble tea.

“It’s all designed to be no fuss. You get in. Get your soup. And get out,” Eans said.