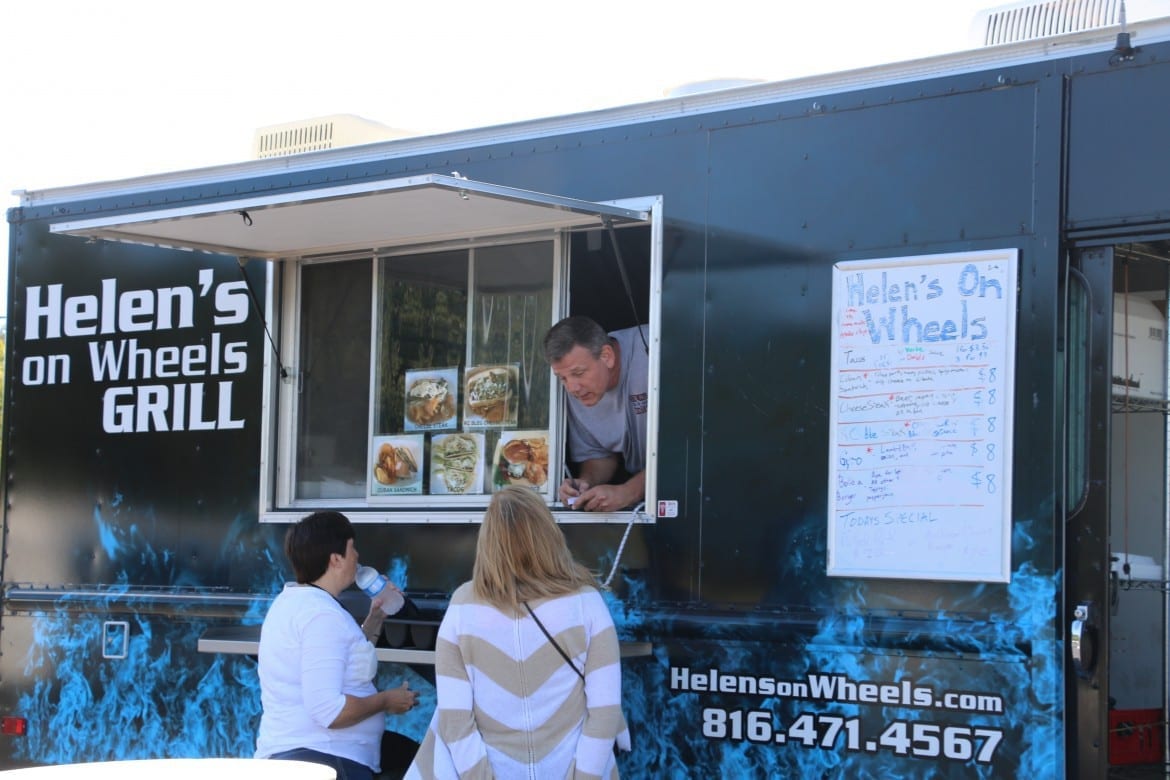 Ron Bredemeier, co-owner of Helen's On Wheels, takes a lunch order in Macken Park after the NKC Parks And Rec Department voted to allow him to stay. (Photo: Daniel Boothe | Flatland)
Share this story

Overruling concerns of some local restaurant owners, the North Kansas City Parks and Recreation Department voted 6-1 Thursday to continue the food-truck pod pilot program in the city’s Macken Park through December. The program originally had been approved for the month of August, and ended September 1st.

Since that time, the City Council of North Kansas City has received numerous complaints from local restaurant owners contending the food truck program ate into their customers and profits.

“My biggest concern was we have 15 brick-and-mortar restaurants,” said Monte Martello, owner of Dairy Queen in North Kansas City, speaking by phone Friday. “These places pay property taxes and rent. Bringing businesses in that don’t pay taxes can jeopardize a small community.  And these mom and pop stores, they don’t have a lot of room for failure.”

Some city council members seem to agree. Councilman Zachary Clevenger told KCPT’s Hale Center for Journalism that he thought the Parks and Recreation Department would “shut it down.”

“We are a small community here, with just over 4.000 residents,” he said. “And close to 25,000 come to the town to work. So lunch is when the majority of these businesses make their money.”.

At the September public hearing, food truck owners counter-argued, claiming that the popularity of the food-truck program would ultimately invite out-of-towners to North Kansas City and, in turn, would help local businesses grow.

However, the decision ultimately fell to the Parks and Recreation Department, which sided with the food truck owners.

While disappointed, Martello said he accepts the decision.

“I love this community and I love everything about it,” he said. “Competition is what makes the world go round. It is an open market. And I welcome the competition. That is the wonderful thing about democracy, we all go along, and we all get along,” Martello said.

On Friday afternoon following the council meeting, Ron Bredemeier, co-owner of Helen’s on Wheels, was set up and open for business. Handing his fusion-fare creations to a handful of customers gathered outside his truck (a couple were city employees, declining to comment), Bredemeier said, “I was there last night. And I thought the decision was very positive.”

Joshua Hook, Bredemeier’s partner and co-owner of Helen’s On Wheels, shared similar sentiments with the Hale Center in a previous Flatland article.

“Pushing the food trucks out (would have been) a step backwards,” he said. “North Kansas City needs to be progressive, innovative and forward thinking. It can’t be caught up in the last 30 years, if we want the community to continue to grow and thrive.”

As previously reported by the Hale Center, some studies suggest that the addition of food trucks in the community do in fact generate revenue for local businesses. However, these studies were conducted in towns with more than a million residents, compared to North Kansas City’s 4,300.

So, only time will tell how the food trucks will affect the local brick-and-mortar restaurants.

The Parks and Recreation Department was unavailable for comment on the decision.

Waldo Hopfest and Other Weekend Possibilities