My Farm Roots: Looking to the future 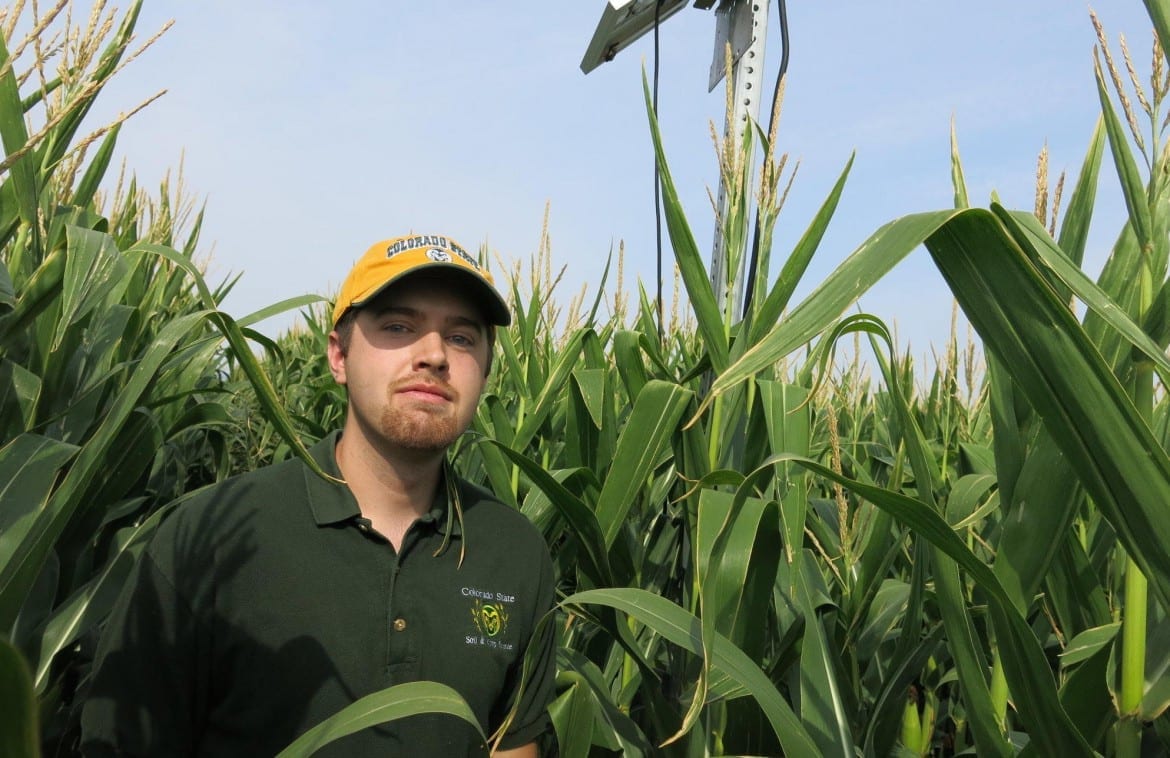 Jeff Siegfried knows just about anything you’d ever want to find out about a 50-acre corn field in northern Colorado.

Standing underneath one of his research station’s at a Colorado State University experimental farm, Siegfried is decked out in a CSU green and gold hat and polo shirt. Siegfried studies precision agriculture at the campus in Fort Collins. Siegfried’s corn field will play a vital role in his final thesis, figuring out better, more efficient ways of delivering irrigation water to fields.

“We’re using technology to make better management decisions,” he says. “So we’re putting the right input in the right place, at the right time and in the right amount. The studies have to be conducted in such a way that eventually it’s the technology that we could be using in the field.”

Siegfried’s choice of study, and future career, represents a much larger trend in agriculture. As farms grow more high-tech, they need fewer people to run them. The number of farmers continues to decline, but the output by farms nationwide has stayed steady. We just don’t need as many farmers days, but someone still must develop the technology to make that happen.

The Siegfried family called a small alfalfa and sheep farm home in Holly, Colorado, on the state’s eastern plains. His research has taken him far beyond the quaint, pastoral picture many people have of farms. He’s interested in data, and using that data to make farms more efficient, outfitting them with high-tech gadgetry.

That’s why Siegfried is into remote sensing technology. Satellite imagery and UAVs, or drones, can take images of fields while flying above. His research stations in the corn field collect and synthesize the data collected, giving a clear and accurate picture of what’s quite literally happening in and on the ground. He points to the top of the station’s metal post.

“At the very top we’ve got cellular antenna that’s broadcasting the soil tension to the cloud every 15 minutes,” he says.

But it’s not always easy to talk about his work with the previous generation of farmers. His work is cutting edge in the world of precision agriculture, and sometimes he’s got to get past a language barrier to keep his friends and family in Holly up to speed.

“With precision agriculture, there’s a lot of jargon involved with some of it. When I get into the remote sensing and start talking about satellite imagery and kernel convolutions, and when I say ‘multi-spectral,’ I get funny looks.”

“If I talk to my mom about it, she usually responds with, ‘I think I understood most of that,’” Siegfried says.

Even though he grew up showing sheep at county fairs and running combines for neighbors, he says being a farmer isn’t in his future.

“It’s a very small farm that I grew up on. So it’s not really feasible for me to go back home and live off that land. I loved Holly, but I don’t think it’s somewhere I’d end up living when I’m out of school,” he says.

That’s a sentiment many young people share about rural life, leading to an exodus in some Great Plains communities that consistently lose population. While he may not grow his crops, Jeff says his career will focus on agriculture, likely in an advisory role. Or, he says, even better would be to work in a classroom. Both of his parents were teachers.

“What I’m really interested in at the moment is education,” Siegfried says. “What I’d like to do is get my Master’s and possibly my PhD and teach at a university or a community college and help to get those younger minds in the future shaped and excited for agriculture.”

My Farm Roots: Learning the ropes

My Farm Roots: Farm Kid Without a Farm