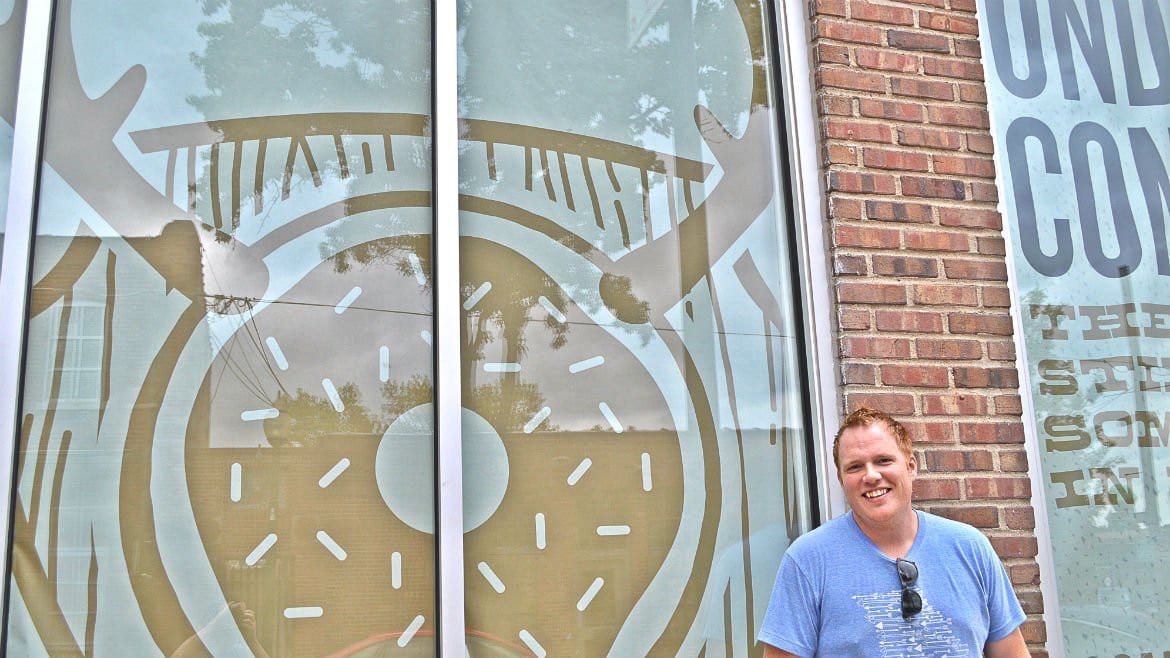 Jake Randall is using a Kickstarter campaign to help open Doughnut Lounge in Westport. The shop will feature coffee and cocktail bars alongside the baked goods. (Photo: Jonathan Bender | The Recommended Daily)
Share this story

Jake Randall straddles a groove in the concrete floor of the future home of Doughnut Lounge in Westport. He’s five months and two contractors into remodeling a former clothing shop.

“I love Lamar’s and Fluffy Fresh and Hana’s (Donuts), but I want something outside the box,” Randall said of the concept slated to open later this fall that will marry a cocktail lounge and doughnut shop. “I realized there was a void in Kansas City.”

His phone pings – alerts from a current Kickstarter campaign and updates on the plumbing project that is next for the space – as he describes the tufted bench seating that will ring the exposed brick wall.

“There’s a little bit of Fargo. It’s the idea of the only bar in town. It’s a bar and lounge and it’s eclectic,” Randall said. “We wanted to take that small town lounge and merge it with a swanky lounge at the W Hotel.”

He glides his hand up in the air to mimic the ramp that will be installed to connect the rooms on two levels at 4117 Westport Road. The room attached to the lounge will have a massive glass pastry case, a coffee bar, and cocktail bar.

“There will be baking sheets that angle down. I want you to see all those colors and sizes and toppings and just have your jaw hit the floor,” Randall said.

Adjacent to the pastry case, a door in the bank of windows facing Westport Road will open to the outside for walk-up customers and online orders. The opposite wall will have a large window to let diners see the kitchen at work. Randall signed a lease on the former Imagery space in May of this year and brought on Ryan Henrich, one of the owners of Breakout KC, a recently opened escape room business in the River Market, as an investor.

“Living in Westport, my wife and I just knew this would be a good thing,” Randall said. “Of course, we’re going to put it right here. There’s no better place to embrace us and accept us for this concept.”

The doughnuts will be divided into three menu categories. The classics will consist of cake doughnuts, old fashioned, yeast-risen glazed doughnuts, and long johns, what Randall classifies as “what you get at a typical doughnut shop.”

The menu leaves tradition behind with the signature doughnuts filled with homemade marmalades and jellies. Randall is also looking at pineapple upside doughnuts, tres leches, tiramisu and a s’mores offering made with smoked marshmallow, dark chocolate ganache, and graham cracker on top.

“The s’mores doughnuts are square and the size of Texas,” Randall said. “They’re square because it’s a s’more. Maybe our doughnuts are going to be triangle. Don’t put us in a box.”

Randall envisions a rotating weekly menu of 12 to 16 doughnuts, a half-dozen classic and eight to 10 signature items. He expects to finalize his kitchen crew this month and continue recipe testing at the Farm to Market kitchen at the City Market while construction continues in Westport.

The wild card for the upcoming shop is the third menu option at Doughnut Lounge: Noduts. The name, his elder daughter Arletta’s nickname for doughnuts, is where sweet and savory collide in made-to-order fluffy pastry rounds.

Randall mentions a doughnut hole filled with macaroni and cheese and sprinkled with bacon and parmesan cheese or a doughnut where the middle has been partially punched out to form a bowl for that same mac ‘n’ cheese. He’s hoping to partner with Q39 and use its burnt ends on a barbecue Nodut draped with provolone cheese. He’s thinking about a French toast doughnut, where the tops have been chopped off, dipped in egg and cinnamon and then fried. It might be offered alongside the breakfast Nodut – a glazed yeast-risen doughnut that is cut in half. There’s a fried egg with a runny yolk in the center and homemade white sausage gravy.

“Noduts are where the donut meets the meal,” Randall said. “It could be an ice cream sandwich. They’re savory and sweet, a hearty fork-and-knife dish.”

Breakfast will be a key time for Doughnut Lounge. Randall would like to open at 6:30 a.m. daily and sell doughnuts and Noduts until they’re gone. The shop would stay open and then offer coffee, juice and tea.

Coffee won’t be the focus of Doughnut Lounge, but the coffee program is important to Randall. While attending college in Illinois, he worked at a small coffee shop that changed his life in two ways. The owner of that shop was Trevor Corlett, who would go on to co-found the Madcap Coffee Company in Grand Rapids, Michigan. Randall also met his wife Megan there.

Together they moved to Valparaiso, Indiana, and opened Anomaly Coffee – a shop they ran for several years before moving to Kansas City, Missouri. At Doughnut Lounge, Randall intends to feature a local roaster and an out-of-town roaster, like Madcap for example, and rotate them on a seasonal basis. The coffee program will be run by Tony Harrison, currently at Quay Coffee, and will have pour overs, drip coffee, cold brew on tap and espresso drinks.

The second round of doughnuts would arrive around 4 p.m. – a scaled down menu anchored by a series of pairings. Think a double chocolate nutella doughnut paired with red wine or an orange cream cheese bitters glazed doughnut paired with a Manhattan or Sazerac Old Fashioned.

“We’re a doughnut shop first and then we bring in certain drinks, classic cocktails to compliment your doughnuts,” Randall said.

The cocktail side of the bar will have Juleps and martinis, wine, and beer in cans. Doughnut Lounge will also have large-format brews for tables to share.

“We’re not opening the doors until the product is the best thing you’ve ever had in your life and our service is right,” Randall said. “I want people walking out with goose bumps and warm fuzzies all day.”

What Happened To The Dead Soldiers In The Battle Of Westport?

You Asked, We Sought Enlightenment

Remembering McCoy's: The Famed Public House Will Close in Westport on Dec. 23