A QUICK, CLICKABLE ROUNDUP OF HEALTH NEWS FROM OUR REGION 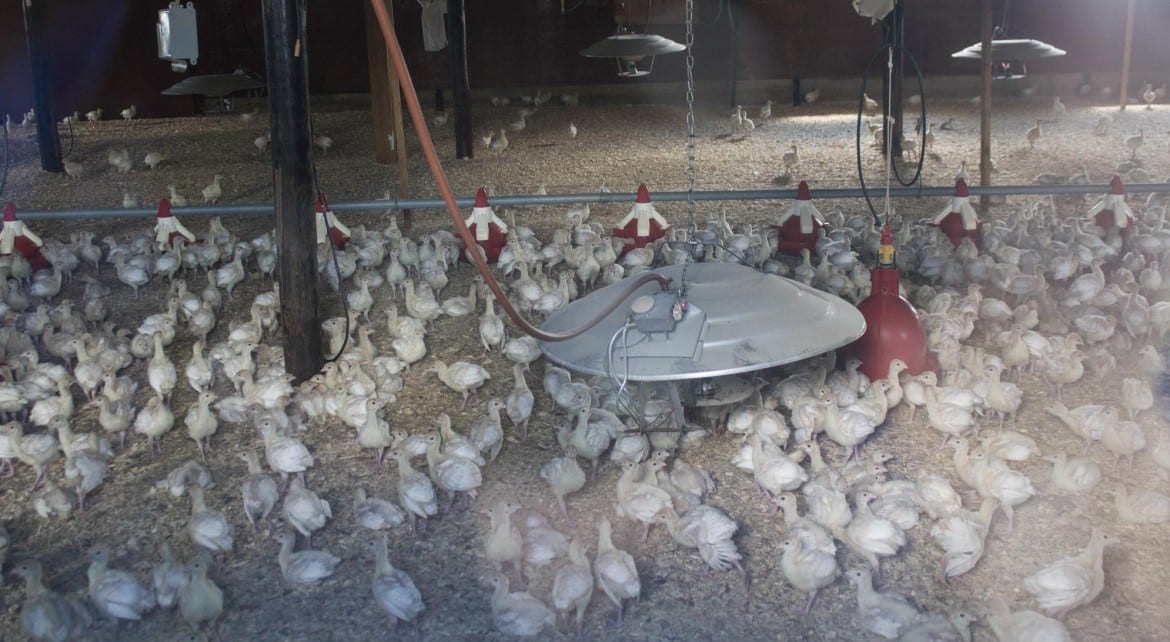 This batch of young turkeys is among the first birds returned to an avian-flu infected farm in northwest Iowa. (Photo: Amy Mayer | Harvest Public Media)
Share this story

Farmers and agriculture officials are gearing up for another round of bird flu this fall, an outbreak they fear could be worse than the devastating spring crisis that hit egg layers and turkeys in the Midwest, wiped out entire farms and sent egg prices sky-high.

The potential target of the highly pathogenic avian flu this fall could be broilers, or meat chickens, as the outbreaks have been triggered and carried by wild birds, which will be flying south in great numbers this fall through several U.S. flyways.

The farmers who got hit this spring, which lead to the destruction of more than 48 million birds, know how life-changing a flu outbreak can be.

People involved in Kansas child care will meet Monday to discuss a plan for moving the state in line with new federal regulations — without the state agency that will have to implement the plan.

Shannon Cotsoradis, president and CEO of a Topeka-based nonprofit called Kansas Action for Children, said her organization is hosting the event at the request of child care workers, associations and continuing education specialists. Cotsoradis said those groups are eager to get started on discussions about the reauthorization of the federal Child Care and Development Block Grants (CCDBG), because a final state compliance plan is due in March.

It’s the first change to the federal program since 1996 and Cotsoradis said it’s a rare and exciting opportunity to decide how to best allocate millions in state and federal funds for day care, after school programs, Early Head Start, and other child development and workforce initiatives. Monday’s meeting is scheduled for 11 a.m. to 3 p.m. at the Topeka and Shawnee County Public Library. Two national child care experts are slated to attend.

Cotsoradis said officials from the Kansas Department for Children and Families were invited to attend and offered a chance to help shape the agenda. They declined.

Water rules in effect in most states despite court ruling, EPA says

To the chagrin of some of the nation’s largest farm organizations, the Environmental Protection Agency on Friday forged ahead with a plan to oversee more of the nation’s waterways, saying it will enforce new pollution rules in all but 13 states covered by an ongoing court case.

On the day the so-called “Waters of the U.S.” rules, or WOTUS, were set to go into effect, the EPA stuck to the deadline, despite a court order issued late Thursday. U.S. District Judge Ralph Erickson put a temporary hold on the rule late Thursday, siding with the 13 states who sued the EPA saying the federal agency was overstepping its authority. Erickson’s ruling means the rules are on hold in Alaska, Arizona, Arkansas, Colorado, Idaho, Missouri, Montana, Nebraska, Nevada, New Mexico, North Dakota, South Dakota and Wyoming.

The EPA said it will enforce the rules, expanding the reach of the Clean Water Act, as scheduled in the other 37 states.

In May, Kansas insurance companies requested rate increases of up to 39 percent for individual market policies to be sold through the healthcare.gov marketplace during the next open enrollment period, which begins Nov. 1 and ends Jan. 31, 2016. But Selzer, a Republican serving his first term, said rate reviews conducted by the department reduced the proposed increases to an average range of 9.4 percent to 25.4 percent.

“During the review process our department was able to lower many of the rate increase requests for 2016, saving significant money for Kansas consumers compared to the original requests,” Selzer said in a news release.

But Sheldon Weisgrau, director of the Health Reform Project in Kansas, said the increases reflect “what it actually costs to insure a large majority of the population,” noting that the system that existed prior to the ACA “excluded a lot of people” who were sick.

In the U.S., farmers use nearly 900 million pounds of pesticides every year to protect their crops from weeds and insects. But sometimes those chemicals drift to neighboring property, which can ruin crops on organic farms. Although conventional farms can also get hit with unwanted pesticides, it’s the $40 billion organic industry that’s most vulnerable. Kaci Buhl of the National Pesticide Information Center says there’s no clear picture of how common pesticide drift is for the nearly 20,000 organic farms nationwide.

“The data would get better and possible resource allocation would increase if there was more consistent reporting,” she said.

Each state’s agency responsible for handling pesticide drift investigations – typically the state Agriculture Department or the equivalent – deals with investigations differently. Missouri Department of Agriculture spokesperson Sarah Alsegar says the department does its best but is sometimes limited by the turnaround time of lab analysis as well as gathering records from the pesticide applicators in the region.