Rolling With Legends in Memorial Hall 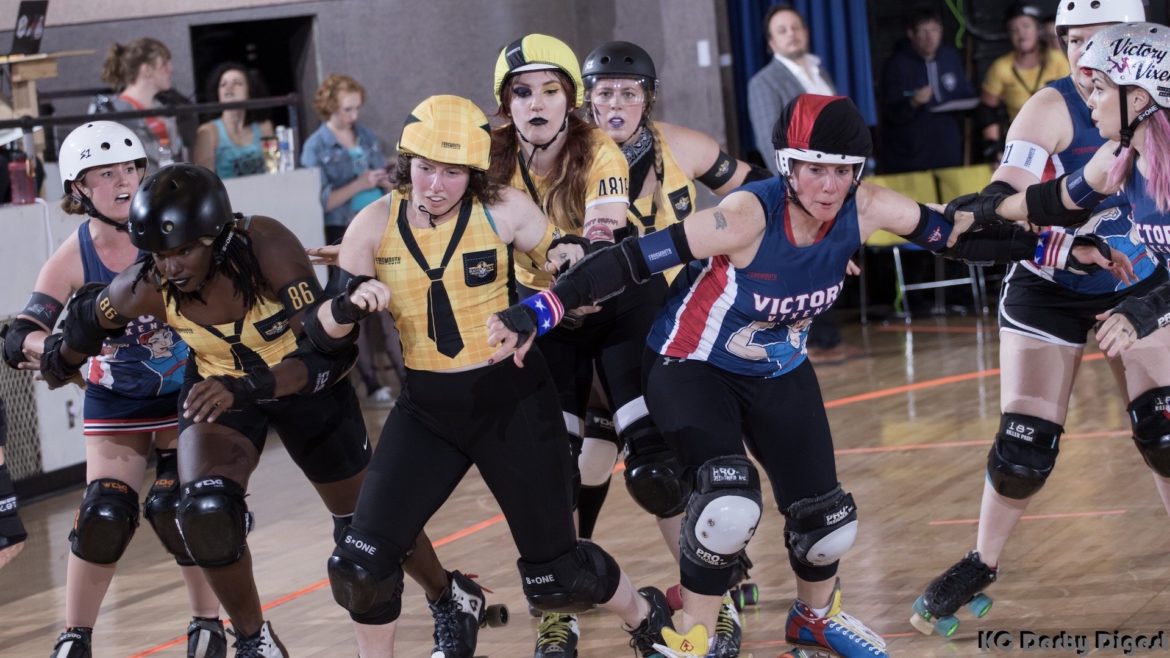 There are venues that transcend their respective sport or the passionate fan bases that fill the bleachers. Performances of the past can be felt from any seat. Reminders hang from the rafters.

Led Zeppelin and Janis Joplin have played the auditorium’s permanent stage in the heart of Kansas City, Kansas. Memorial Hall is where country music comet Patsy Cline played what turned out to be her final show. The Grateful Dead played there eight times between 1969 and 1979.

Today, the venue belongs to the Roller Warriors.

Aside from occasional concerts, boxing matches and fights, it’s the skaters who carry on the 3,500-seat auditorium’s storied history. And if you ask second-year Vixens skater Sophie “Sopherocious” Elniff, a lot of people are getting her sport completely wrong.

“A lot of people think it’s like a burlesque show or something,” she says, looking past her pink hair at a handful of skaters gliding around the long oval track. “I’ve heard people say, ‘Oh roller derby, I wouldn’t want my husband to go to that’ — or silly things like that. People will say, ‘Where do you perform?’ No. Play. It’s a sport.”

Roller derby was born in the 1930s and initially enjoyed by millions as a skating competition. In the following decades, derby took a turn for the sports entertainment realm, meaning scripted bouts with predetermined outcomes, over-the-top theatrical elements and professional wrestling-esque violence.

Modern roller derby is played in two 30-minute periods, where two teams of 15 each send five skaters onto the track at a time — four blockers, one jammer — competing with the goal of sending their jammer (the scoring player) around the track and through the line of shoving skater for a complete lap good for a score, as many times as possible before the end of the two-minute jam.

Sopherocious says that once first-timers watch roller derby, misconceptions about the Olympic Committee-recognized sport vanish. As for the fishnets, dramatic makeup and pun-heavy vulgar derby names? That’s just a group of grown women empowering one another.

“I describe it as kind of like football,” she explains. “The blockers are kind of like linemen and the jammer is kind of like the combination of a quarterback and a receiver. They’re almost like the football that throws themselves through.”

The earliest lessons for new skaters at KCRW’s “Fresh Meat Night” include how to get knocked down. Then comes how to throw a hip check that would toss Charles Barkley. After that comes how to skate through a Memorial Hall mosh pit.

Who laces up alongside Sopherocious in the dark concourse of Memorial Hall on a weekly basis November through April?

“I’m a 47-year-old mom that lives out in the burbs and I’m friends with all of these people from all around the city,” says Jennifer “Mayhem” Meyers Ecton, after proudly pointing out a drop of dried blood on her skate.

Ecton first watched a bout during a night out with her husband and quickly decided the sport was for her. The following season she tried out at age 41, made a roster and decided to play it safe with the name “Mayhem” because her three kids would be watching from the stands and later competing on the juniors team.

Mayhem has since met league mates like Dreadnought Dorothys’ blammer Christy “Jamalamadingdong” Ubelaker and Vixens’ blocker Rachel “Baby Buster” McLaughlin — a pair of roller derby veterans who have played the game for the better part of the last decade and provide a pretty good reason as to what makes paying their own way to play a fringe sport worthwhile.

“You gravitate towards people who are like-minded and those are the people who I get along with or identify with,” Jamalamadingdong says before questioning nearby skaters. “I’m 48, you’re 47, how old are you? We’re some of the toughest mother… out there. That’s staying power for sure.”

Staying power that’s rooted in more than toughness. The Roller Warriors are like-minded in championing inclusivity — a value made crystal clear as a top priority by the Women’s Flat Track Roller Derby Association and perhaps the reason the group fields four teams of nearly 20 skaters from all walks of life.

“It’s a place where people get to be someone else for a bit. We have a lot of moms, doctors, lawyers. There also seems to be a lot of introverts,” Baby Buster adds. “This is the kind of place where they can let the freak flag fly and it’s just kind of an outlet I guess.”

“We are here to empower each other and that just sets the ball rolling. We are nurturing, we want to include people and celebrate,” Jamalamadingdong said before pushing off and heading through Memorial Hall’s tunnel.

“I would say we’re awesome.”