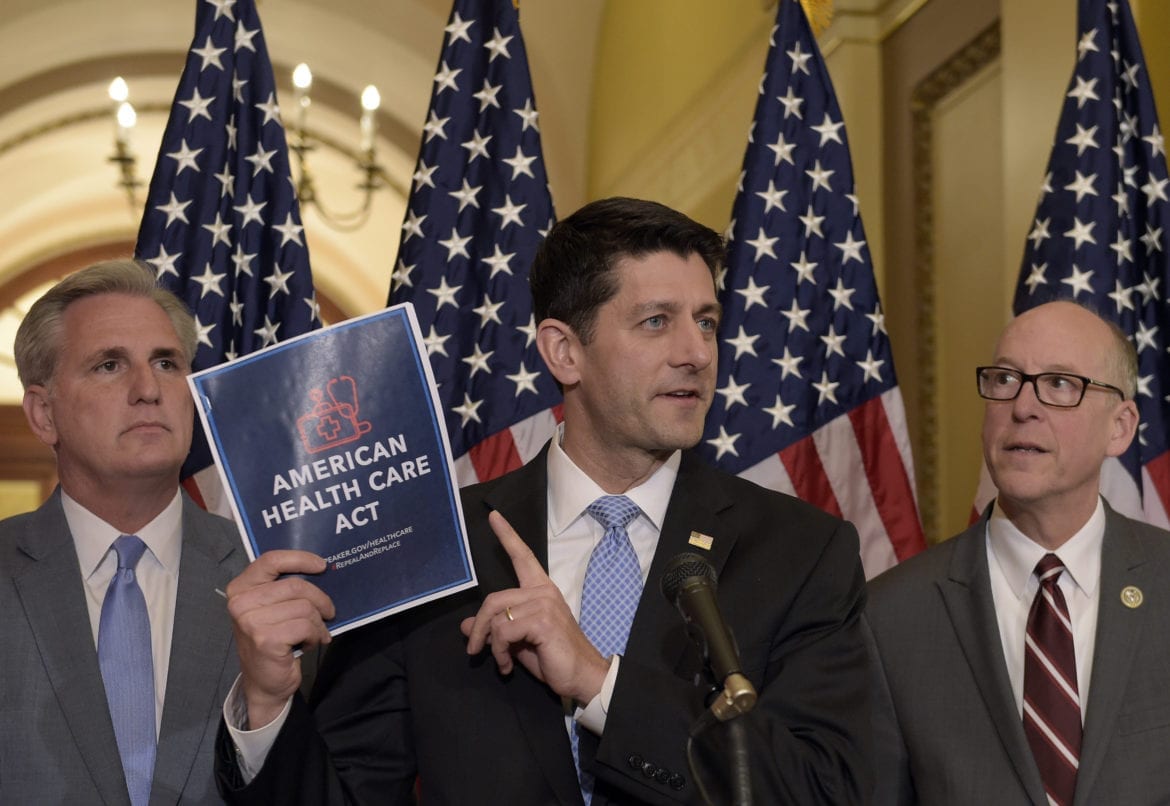 Olathe native Tim Gronniger served as a top official with the Centers for Medicare and Medicaid Services under the Obama administration. Currently a non-resident fellow at the Brookings Institution in Washington, he also was a senior adviser for health care policy at the White House Domestic Policy Council, a senior staff member for Rep. Henry Waxman, Democrat of California, and an analyst with the Congressional Budget Office.

Gronniger was in Kansas City Thursday for a town hall-style meeting in Overland Park about national health care issues and the possible impact of the American Health Care Act, the Republican health care overhaul bill passed last month by the House, on local communities.

The Senate is working on its own version of the bill, which would halt the Affordable Care Act’s expansion of Medicaid, end penalties for people who do not buy health insurance and eliminate taxes on high-income earners, insurers, drug makers and medical device manufacturers to help pay for the ACA. 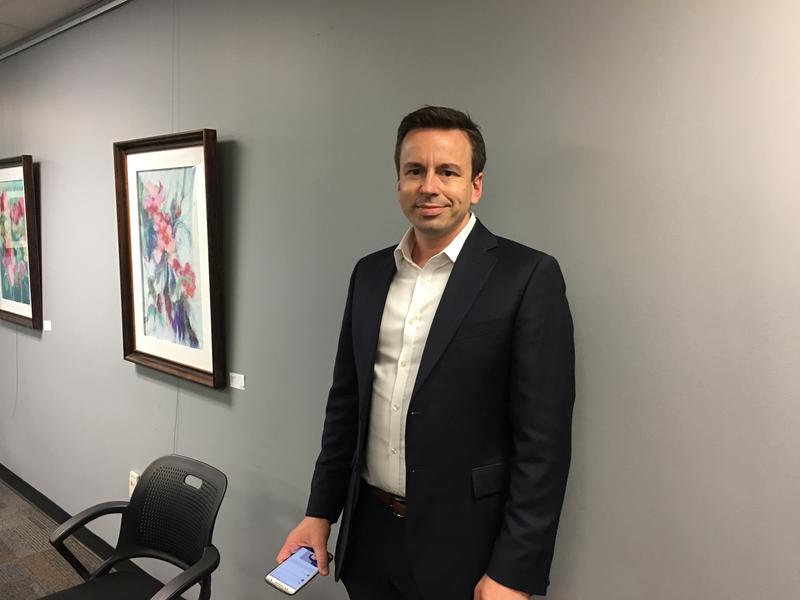 The event was sponsored by the Alliance for a Healthy Kansas, which is working to expand Medicaid in Kansas, and Indivisible KC, the local chapter of a national group opposed to the Trump administration’s agenda.

KCUR’s Dan Margolies spoke to Gronniger before the event. The interview has been edited for length and clarity.

You say the health care bill passed by the House last month poses threats to families across the country. What kind of threats does it pose?

I think that I would identify four major ones. And you know we have a lot of problems in health care. There are all sorts of things that need to be done. And this bill doesn’t fix any of them. So just to quickly tick through the big threats:

The bill would directly take away coverage from 23 million people, including many people over the next year. More than 200,000 Kansans would see their coverage taken away. For many people – older people who have health conditions, people who are lower income – the bill would dramatically increase the costs of medical care both through their health insurance premiums, but also through the costs that they have to pay a doctor or hospital when they actually go to seek care.

But more broadly, the bill could affect virtually everyone at the end of the day. Everyone has a family member who has been sick. Everyone has that the possibility of losing their job or someone in their family facing a layoff. And so the bill would upend protections that we all depend on in the insurance market today.

In many cases, including certainly in states like Kansas, there’d be the possibility that the insurance market would essentially vanish for people or family members who had been sick before, making it very risky to work for a small company or to take any sort of entrepreneurial risk to start a company because people would not be able to access care.

And then we’re also going to talk about what the bill would do to the Medicaid program – reducing funding for Medicaid by almost a trillion dollars over the next 10 years, largely to fund tax cuts for the extremely wealthy.

Yes. I mean you know when you get elected to Congress your job is to talk to your constituents about issues that matter. No bigger bill has come before Congress this term than this legislation. I think it’s irresponsible on a certain level to not meet with your constituents in a public forum to talk about this issue.

So if the bill passes the Senate –  and you know I think that there are a lot of reasons the Senate should pause and throw this bill out entirely – but if it does come back, then Rep. Yoder will have a chance to do the right thing and to make sure that we are not talking about people losing coverage. There’s no reason that we need to see people lose coverage in this country. Why not try to write a bill that increases insurance coverage? It is eminently doable and totally feasible to write a bill that does that. And I hope that Rep. Yoder and Sens. (Pat) Roberts and (Jerry) Moran will take that perspective.

You know, let’s compare this to Medicare: Medicare passed in 1965 and has been updated and improved countless times by Congress and by various executive branches of both parties. Medicare faced major questions about its survival throughout the 1980s and ’90s, including funding crises that were just years away. But consistently, the parties came together to make incremental changes to ensure the continued existence of the program and to make it work better over time.

What I would like to see is the same type of approach taken here. There has been an effort – essentially deliberate sabotage by the (Trump) administration to try to make the program work less effectively, to increase premiums for people in order to foment a crisis. Call it the ‘we have to burn the village down to save the village’ approach. I think that’s grossly irresponsible. The changes that would be required to fix problems under the current structure are very, very manageable changes.

Democrats would be eager to work with Republicans to improve the current situation and would be open to a lot of different approaches. But you don’t do that starting from a bill that takes a trillion dollars out of health care and turns it into tax cuts for wealthy people, for pharmaceutical companies, and the like. So we need to start from a different place here and work on improving the current system.

Blue Cross Blue Shield of Kansas City recently announced that it will be pulling out of the Affordable Care Act’s individual market. Do you think they would have done so if, as you say, the current administration had not sought to undermine the law?

I do not think that they would have. And it was our job, it was the job of the people I worked with, to talk to insurance company executives and insurance regulators in every state to ensure that we were going to have strong market participation – or at least minimally adequate market participation to support access for care.

And so this administration, just to be specific about it, about what they’ve done to undermine the functioning of the law:  They have stopped marketing and outreach almost on their first day in office, stopped letting people know that it was time to sign up for health care. They have threatened to take away payments that the insurance companies have depended on and have now injected a huge amount of uncertainty into $7 billion dollars-worth of payments that are used to reduce costs for people making less than $30,000 a year.

That type of uncertainty in a market that is all about managing risk is huge, is crippling, to running a business. Insurers, according to S&P (Standard & Poor’s) and other analysts, were getting on more even financial footing for the 2016 plan year. And the markets were headed toward toward some measure of stability. We still have very strong access across the country. I’m very worried about what I’m seeing in Kansas City.

And it would not take a lot of effort for the Trump administration to do their day jobs of working to keep access in all of the markets where there are sufficient insurers. They would only need to say that they are going to make these payments that the government has been making for three-and-a-half years and that they were not going to try to repeal health care. And that would inject a huge amount of stability into the markets across the country.

You know, the Senate, looking at the unpopularity of the House bill, looked at that and said, ‘We’re going to start over because we recognize this is unpopular, we’re going to have a secret process with 13 men and no women and no Democrats in the meetings, no press, no experts.’ And they have said that they’re going to fix some of the problems.

That said, we have no guarantees that there’s going to be any sort of normal input process here for the public to weigh in. And we heard earlier this week that the No. 2 Republican in the Senate, John Cornyn, said it’s going to be about 80 percent the same as the House bill.

So barring some cosmetic changes that I’m sure they will make, I am not actually hopeful that they are going to fix the problems that are at the root of this bill.

Let me ask you to speculate: Do you think some kind of bill, in whatever form or shape it ultimately takes, is actually going to get passed?

You know, I don’t know. I think it is a close call. Once the House revived its process, surprising many people including myself, it has gotten to be way too real and it’s very possible that the Senate is going to pass something that’s going to take away coverage from millions of people and take away protections from premium increases due to working in the wrong job.

We’re going to be meeting with people (at the town hall) – a woman who donated a kidney because she’s a great person and she wanted to help someone. She anonymously donated a kidney. She would face increases in costs under this bill and the possibility of being denied coverage. So I think that prospect is very real. I don’t know if it’s going to happen, but it’s far too close for comfort.

This woman who donated a kidney: Do you mean she would face increased costs under this bill because she would be regarded as having a preexisting condition?

She certainly could. There are a lot of unknowns in how this would all work. And that’s part of why we need a better process to get more input from experts and state insurance regulators, who would be left with a lot of these decisions. But under the latest amendments to the bill, which throw out some of the federal guarantees and protections for people with preexisting conditions, the prospect of insurance companies getting to decide who gets health care, who gets access to health insurance and what they pay – without any guaranteed benefits or without any assurances that because you donated a kidney, you are a risk for kidney disease in the future or other health problems – she could face increases in costs under the new rules of this bill.

Dan Margolies is KCUR’s health editor. You can reach him on Twitter @DanMargolies. For more news about health and other topics, go to kcur.org.