East Side Church Renovation Looking Beyond The Building 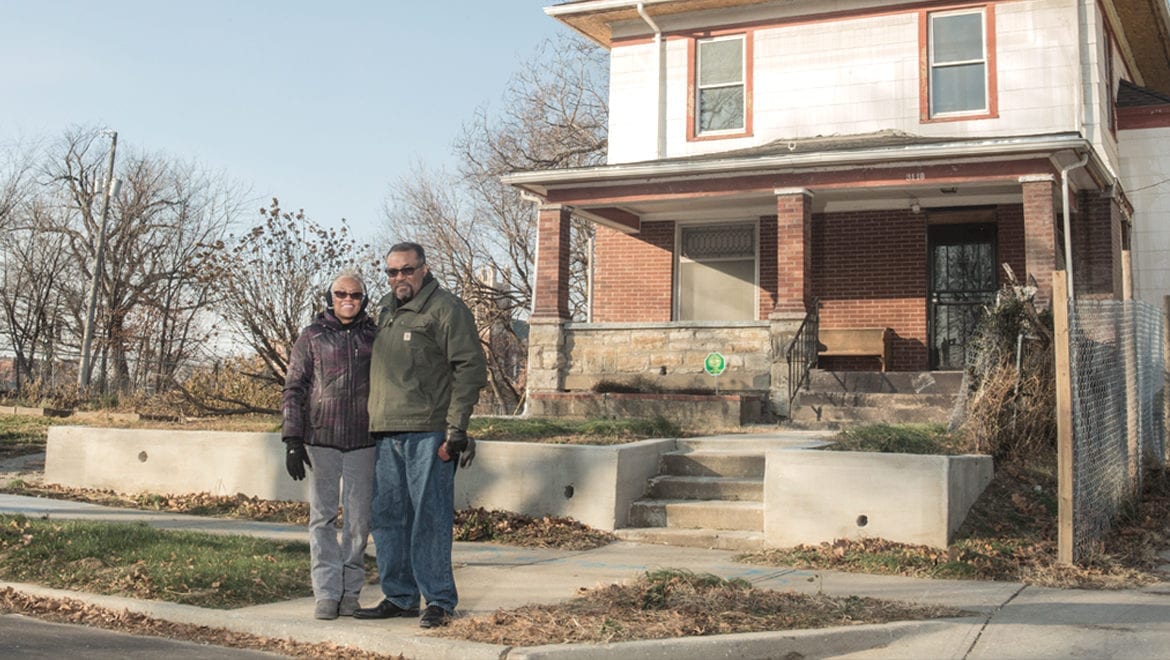 The Rev. Wallace Hartsfield, II, and his wife, Amy, stand in front of a once-abandoned home on Garfield Avenue in Kansas City. They have converted it to a youth resource center. (Photo: Brad Austin | Flatland)
Share this story

As the early Sunday morning service at Metropolitan Missionary Baptist Church let out recently, Deacon Roosevelt Hall was happy to explain the large round button pinned to his lapel.

Yes, Hall said, it was about the 121-year-old congregation’s recently launched building renovation project. But that’s not all Metropolitan’s members are committed to.

“It’s a lot of things,” Hall said. “When we started the renovation, we realized we had to do more than renovate the building. We had to renovate the community.”

Metropolitan is located in an economically struggling community, a few blocks east of U.S. Highway 71 at 2310 E. Linwood Blvd. in Kansas City. The area suffers from crime and blight.

Metropolitan’s pastor is the Rev. Wallace Hartsfield II, who hesitantly returned home from Atlanta nearly a decade ago to take over from his father, who had led Metropolitan for 42 years. He was apprehensive about pastoring to people who had known him as a baby and essentially helped raise him.

“God’s going to bless us and get it done.” — Roosevelt Hall, church deacon

But Hartsfield came back because he saw a crisis that government and legislation weren’t solving. He saw a community outside Metropolitan’s doors that needed the church to step up and help.

Hartsfield believes that standing behind a pulpit preaching is only a small part of his calling. More important is the work he does in the community.

“If the church is going to be successful, it has to have not only a word, but a solution,” Hartsfield said. “We can’t just keep saying something from the pulpit. We need to address it.”

Metropolitan’s renovation project is one big step toward its plan to do that. While many other churches have fled Kansas City’s inner city, Metropolitan has decided to stay put. The church developed a multiphase building plan, which would not only revive a building but also, it hopes, give new life to an entire community.

Metropolitan, whose members by and large do not live in the church’s surrounding neighborhoods, has been raising dollars incrementally through donations for two years. With $2 million in the bank and a $2 million loan in the works, the church recently began the renovation.

This phase will repair a leaky roof, replace heating and cooling systems, renovate the sanctuary and make other improvements to the century-old structure, which Metropolitan purchased from First Baptist in 1985 after that congregation moved out south.

If future phases of the project move forward — the ones that take its price to a soaring $16 million — Metropolitan would build a new community center adjacent to its existing building. The vision is for a center that would reach out directly to the surrounding community with job training, technology access, entrepreneurial support and other services that neighbors can’t find nearby. 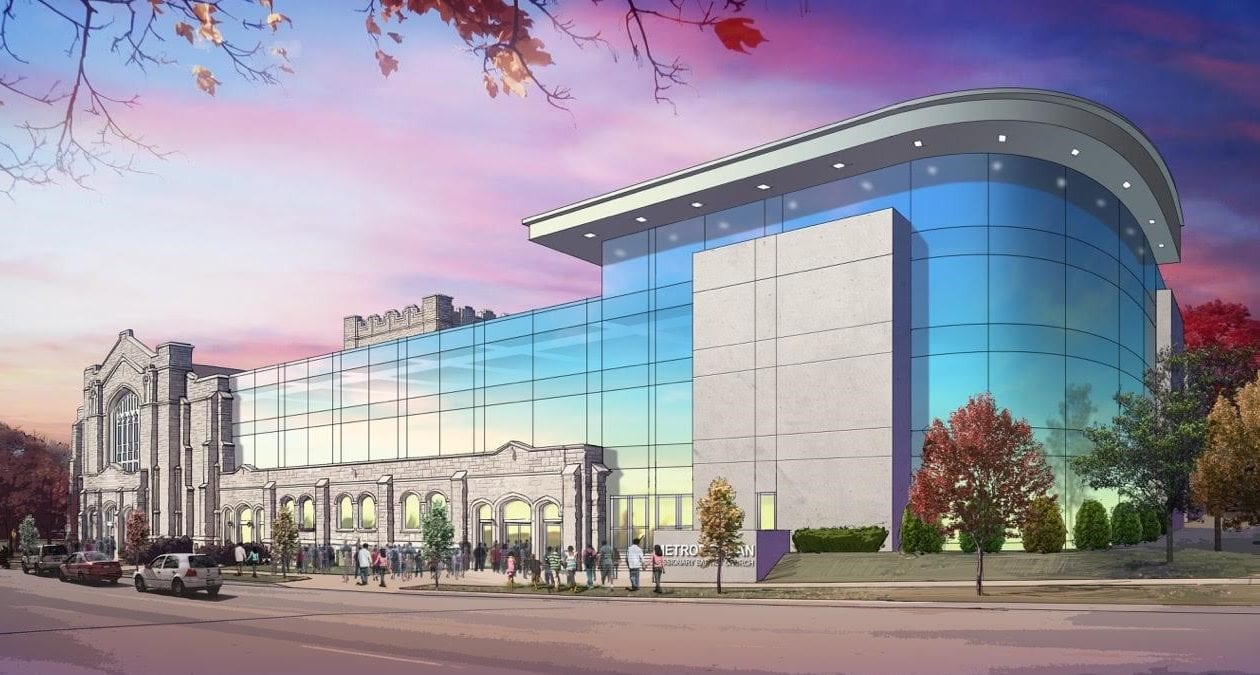 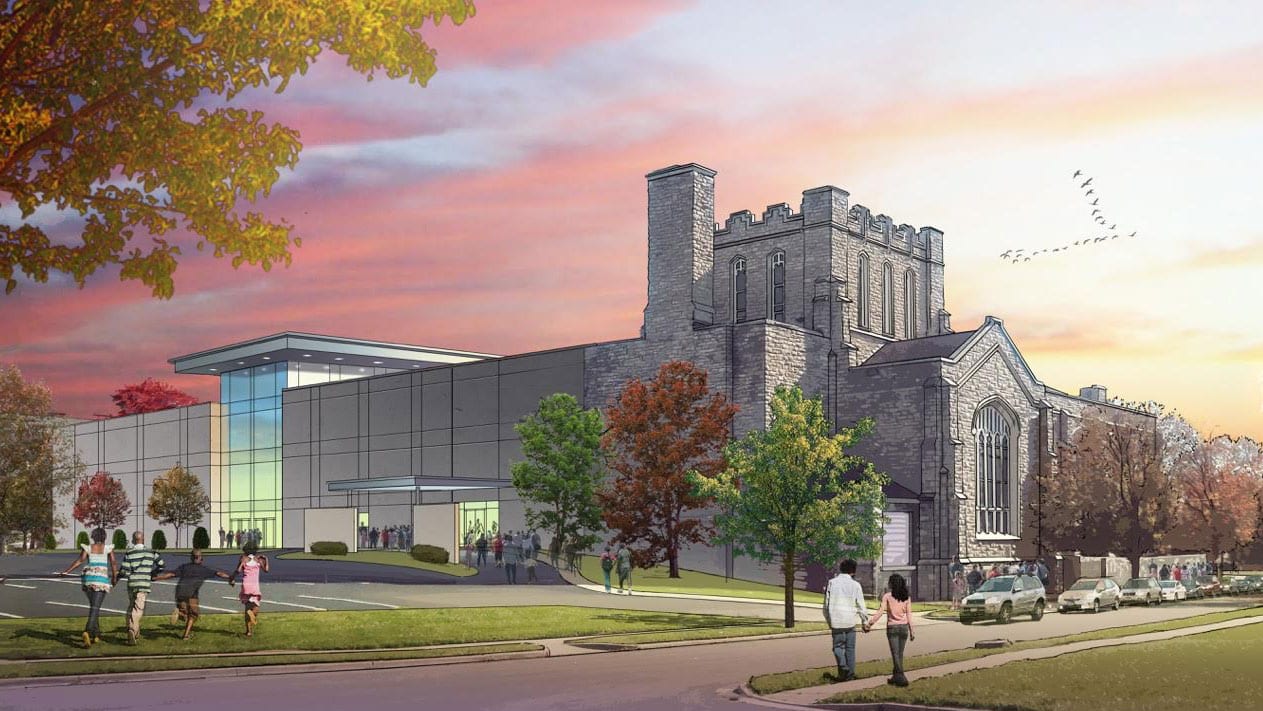 Metropolitan members are bullish on their church’s ability to realize the dream of completing the full project.

“God’s going to bless us and get it done,” Hall said without a hint of doubt in his eyes.

But even if the full project proves too expensive for a church that has dwindled to about 500 active members from around 2,500 in the middle part of the last century, Metropolitan’s work in the neighborhood has already begun.

The church has purchased 21 nearby properties to have a say in who develops them and how, including one at 31st Street and Brooklyn Avenue, where a gas station is under construction. It will be one of only a few in the area.

Metropolitan used about $30,000 from its renovation proceeds to pay for the lots, securing them by paying off debts accrued by the previous owner, a failed nonprofit community development corporation.

Hartsfield hopes the church can help lure more middle- and upper-class people to the community by bringing in grocery stores, jobs and other amenities that are taken for granted in more affluent parts of town.

When they moved back to Kansas City, Hartsfield and his wife, Amy Hartsfield, a member of the Kansas City school board, bought a house for $4,000 two blocks from the church.

“This is what distinguishes Wallace Hartsfield,” said Lora McDonald, executive director of the Metro Organization for Racial and Economic Equality (MORE2). “He grew up in the neighborhood. He’s chosen to live in the neighborhood, and I imagine he could have lived many other places. He is, through and through, practicing what he’s preaching. I would stand behind that guy in a heartbeat.”

The Hartsfields’ daughter, son-in-law and grandchildren live next door, and they have converted an abandoned home across the street into a resource center that offers food, shelter and a meeting place to youth from the area. The once overgrown lot next to the center is now a community garden and orchard.

Board member Marvin Szneler, executive director of the local Jewish Community Relations Bureau/American Jewish Committee, praised the Hartsfields for the untold hours they spend cooking for kids from the neighborhood and doing whatever they can to steer them in the right direction.

“They’re trying to affect change without screaming and yelling, and they’re trying to encourage people to do the right thing,” Szneler said. “The effect they have on these families they do end up touching is unquantifiable. It changes the world. Even if it keeps 10 kids off the street, that’s huge.”

“I think there are enough efforts and initiatives underway that if the work of those come to fruition, we will really start to turn around some of the development issues in our community,” Cleaver said.

Metropolitan needs to be all in, Hartsfield told congregants in the recent service marking the third Sunday of Advent, when the congregation lit a pink candle to symbolize joy.

He stood behind the pulpit at the front of Metropolitan’s stately sanctuary, adorned with a grand pipe organ, intricate floor-to-ceiling stained glass windows and detailed crown molding.