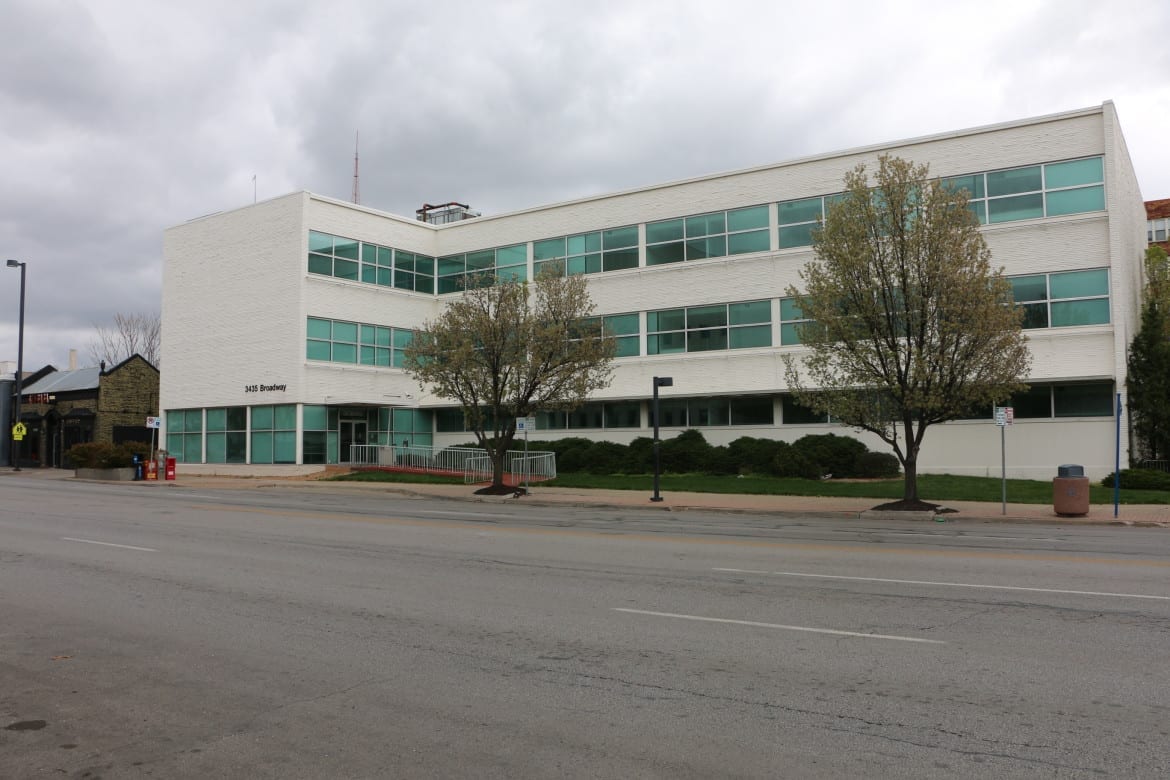 Citizens of the World Kansas City announced Thursday that it is finalizing lease talks to occupy this building at 3435 Broadway Boulevard in Kansas City, Missouri. (Photo: Mike Sherry | Flatland)
Share this story

Citizens of the World Kansas City (CWCKC) said Thursday that it’s a week or two away from finalizing a lease agreement on a building on the northeast corner of Broadway and Armour boulevards.

That news followed Wednesday’s announcement by Academy for Integrated Arts that it has purchased a former bowling alley at 7910 Troost Ave. for its new location.

Financing for the CWCKC project is coming through Chicago-based IFF, a nonprofit lender and real estate consultant, in partnership with the Ewing Marion Kauffman Foundation. CWCKC is negotiating a long-term lease with IFF with plans to eventually purchase the facility.

Financial details were not disclosed.

CWCKC is the result of efforts by a group of Midtown parents who wanted an alternative to Kansas City Public Schools, which has struggled academically in recent years. It is not fully accredited by the state.

Charter schools are tuition-free options financed through public funds, designed to give parents more choice than the established school district.

CWCKC’s target service area is bounded by Union Station to the north, Brush Creek to the south, State Line Road to the west, and Prospect Avenue to the east.

The school is scheduled to open in the fall with 12 classrooms serving a K-1 population.

Droege said they are about a quarter of the way toward their first-year enrollment goal of 288 students, with additional parents showing interest but awaiting word on a location. Second-year plans call for the school to add six classrooms to serve a total population of 432 students.

Long-term plans call for Citizens of the World to go all the way through high school with a total enrollment of nearly 1,800 students.

Droege said school officials considered space throughout its geographical preference area, including in eastern areas that tend to have higher concentrations of low-income minorities, but that the selection of buildings was limited.

One plus of the new building, she said, is that Armour serves as a major east-west thoroughfare.

School officials hope to continue moving east as they add space for the additional grades, she said.

Droege said the renovation and design plans for the new building should make for a “really joyous and exciting atmosphere.”

A campus kick-off, which is open to the public, is scheduled to be held in the parking lot of the new building, at 3435 Broadway, on Wednesday from 4:30 p.m. to 6 p.m.

NEXT STEP IS CONSIDERATION BY THE STATE SCHOOL BOARD