Unearthing the Truth About Slave Burial Sites at KCI

The Lingering Legacy of "Little Dixie" 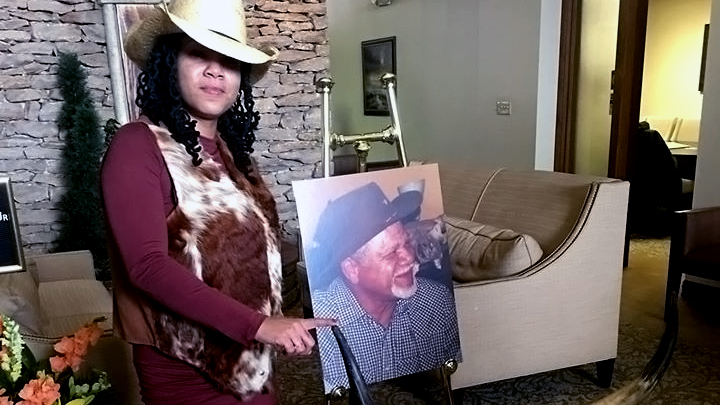 Oralee McKinzy, daughter of Warren Watkins Jr., is working on a "digital wall" – an interactive educational exhibit – for Kansas City's African American community to learn where they came from. (Contributed | Oralee McKinzy)
Share this story

There’s a persistent rumor in local circles that part of Kansas City International Airport was once a slave graveyard.

The topic crossed Flatland’s radar when an anonymous contributor asked the curiousKC team to see if there is “any truth to that.”

But Flatland’s interview with the Kansas City Aviation Department and Oralee McKinzy, a descendant of slaves in the area, unearthed a more complicated story.

Johnson had discovered he was the great-grandson of a slave called George Washington who worked on a plantation in Platte County, Missouri, in the 1800s. The Miller project was a personal history quest for him. He wanted to dig through plantation ruins that, he wrote, consisted of a house, outbuildings, slave quarters, pre-and-post Civil War artifacts and a small family cemetery.

Johnson’s great-grandfather worked for farmers and slaveowners Jesse Miller and Margaret Jones-Miller, from 1840 through the early 1860s. Today the Miller site, which was once a hemp plantation, is a commercial property owned and managed by the City of Kansas City, Missouri Aviation Department according to The Platte County Citizen. That property sits on the south edge of the airport property.

In his research, Johnson learned that most of the African American archaeology that exists focused on larger southern plantations. So small-to-medium-sized plantations – also called farms – that were common in Missouri in the 1800s were overlooked.

Historically, slave owners migrated from the South settling in western, middle and eastern parts of Missouri. This area was known as “Little Dixie,” a string of counties north of the Missouri River that stretches from Illinois to the Kansas border.

Settlers brought with them their southern culture and slavery.

“In Platte County, we were farmers. We were also a slave state, that’s just who we are,” said David Long, deputy director of aviation at the Kansas City Aviation Department, where he has worked since 1995. When Long started, the search for slave graves was already well underway.

In 2007, the city of Kansas City, Missouri, proposed disinterring the remains of families who once lived there to make room for a motorsports track, according to court records. The cemeteries known to exist on KCI property are the Brightwell Cemetery, the Miller-Rixey Cemetery, the Samuel Hoy Cemetery, and the Kimsey Cemetery.

Those families were likely farmers and some of them had enslaved people working for them. People like Johnson’s great-grandpa and Oralee McKinzy’s ancestors.

“We know where we’re buried at and a lot of people can’t tell you,” McKinzy said.

McKinzy, a Rockhurst University alumna, is a fifth-generation descendant of enslaved people in Missouri and learned her ancestors were buried in one of the four cemeteries in airport land.

Her father, Warren Watkins Jr., was the nephew of Bruce Watkins, the first black Kansas City councilman to be elected in 1966. The Watkins family worked tirelessly to preserve African American histories and educate the public about their contributions to the city’s development.

That hinged on acknowledging their roots.

Before he died last year, Watkins Jr. asked his daughter to take the helm of a project that would educate the public about black families who had been enslaved. He was often at city meetings to remind airport officials of his ancestors’ existence and planned to work with the aviation department to create an educational, interactive exhibit so people can search for their family histories.

Coincidentally, he was working with Johnson.

“They had this passion to make sure that those ancestors are being recognized,” McKinzy said. “‘This is the movement to healing.’ That’s what my father would always say.”

So, what we know for sure is that KCI is in Platte County, an area known to have had several plantations worked by enslaved people.

What happened, then, to their graves?

“I began this project by conducting a search for literature in slaves studied in Missouri, as well as elsewhere in the United States. I quickly learned that for Missouri, no archaeological scholarship exists or has been recorded for slave plantation life,” Johnson wrote in 1998.

His survey was possibly the first. Historical archaeological accounts echo Johnson’s sentiments that not enough research is done on African American archaeology, nor on the diverse nature of slavery practices and burials.

Over the years, farming and airport developments may have eroded and destroyed artifacts that would help piece together the land’s history and unearth unmarked gravesites. However, the Kansas City Aviation Department did pay to test the land for evidence of slave burial sites.

In the 1800s, enslaved people would have been buried in an unmarked grave, or if they were marked they would use either red granite rock (common in this geographical area) or with a piece of wood. When Johnson surveyed the Miller plantation, he found mounds of red rocks but theorized that those may have been moved to make room for a farming field.

One thing is true: slavery existed in the Midwest and more specifically Missouri. Family members of the four cemeteries have said there are “slaves known to have been buried there,” court documents state.

“I will say this, there are probably are slaves that are buried somewhere on airport property simply because of the homesteads that were here and the fact that this was a slave state,” Long added. “We never argued about any of that. It’s just a matter of – where is it?”

For now, the new KCI terminal developments will continue with an archaeologist on hand to ensure the land is safe for development. And McKinzy will keep working on the project her father started to make it a reality.

“The memory of these people on these plantations will not die away,” she said.