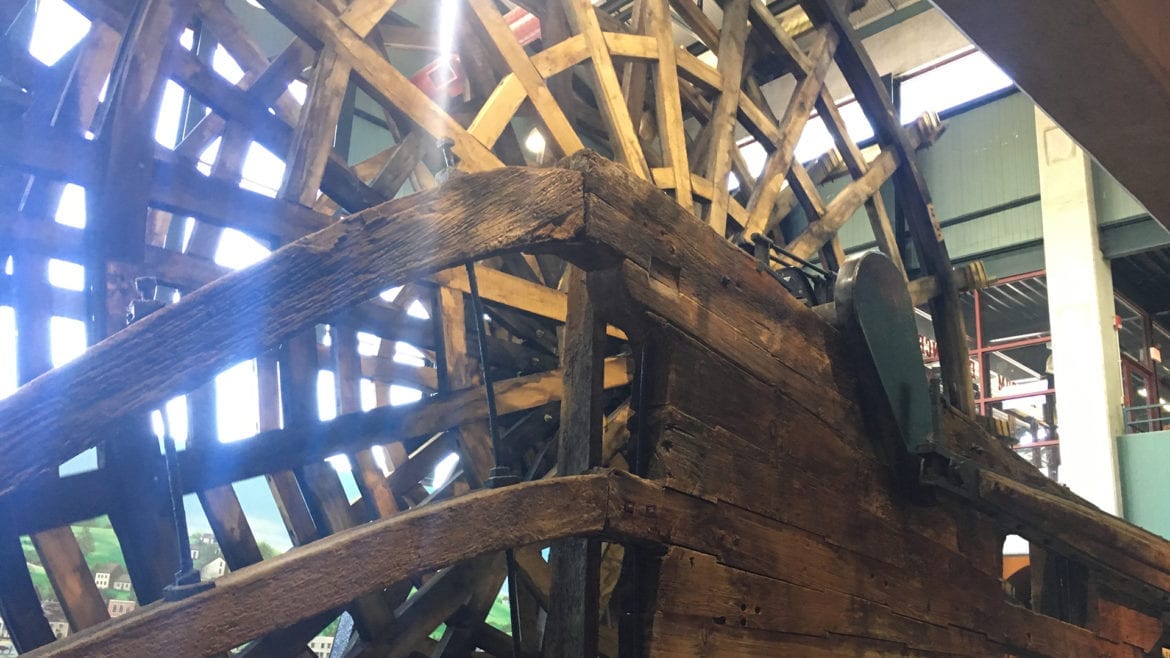 The paddle wheel from the Steamboat Arabia has greeted visitors for decades at the Kansas City, Missouri, museum that houses the steamboat's artifacts. Every morning, the museum’s founder and owner flips a switch to get the wheel moving. (Peter Loganbill | Flatland)
Share this story

Should I stay, or should I go?

Those are lyrics from a 1980s rock song, but it also sums up the current state of affairs for the  Arabia Steamboat Museum in Kansas City, Missouri. That’s because it’s unclear whether the museum — which displays 19th-century artifacts recovered from the sunken steamboat — will remain in town.

Flatland caught up with museum’s owner and founder, David Hawley, after fielding a curiousKC question about the fate of the museum, which has operated in the City Market since opening in 1991. News of the potential departure concerned the questioner, who asked, “Can anything be done to save it?”

A lot remains up in the air.

It seems likely, though, that the museum will leave the City Market once its lease is up in 2026. Hawley noted that the rent will increase at that point, and he said the building could use some repairs.

But the biggest drawback might be that the space is too small for Hawley’s grand plans. He’s located 11 sunken Missouri River steamboats, including the Arabia, and he wants to display treasures from six.

Hawley is a hometown boy, and a part of him would like to keep the museum in Kansas City.

“Everyday I work here, I hear the same stories from so many people that say, ‘Thank you for keeping the collection together,’” he said.

Since its opening, the Arabia has had approximately 3 million visitors. Visit KC promotes tourism in the city, and its CEO, Jason Fulvi, emailed this statement when asked about the Arabia’s uncertain future:

“For nearly 30 years, the Arabia Steamboat has been a very popular Kansas City attraction. Housing the largest single collection of pre-Civil War artifacts in the world – 200 tons of cargo – we are hopeful that it will remain in the metro and expand to feature contents from both the Arabia and the Malta. We value the partnership of the Hawley family and will continue to promote it.”

There is, however, the small question of money.

Hawley would need help from community benefactors and leaders to afford larger space.

The current display area is about 23,000 square feet, and on average, he said, he’d need about the same amount of additional space per new boat. That would bring the total amount of display space needed to nearly 140,000 square feet.

State legislation has been proposed that would increase the levy on the state’s casinos to establish a Steamboat Legacy Fund. The fund would finance the construction and operation of a steamboat history museum in Jefferson City. Hawley said that museum would be a potential new site for his exhibits.

Hawley said that if a home for the artifacts is not found by the time the lease runs out, he will likely move the exhibits to the Heinz History Center in Pittsburgh, Pennsylvania. Pittsburgh and the surrounding area is the construction site of many river steamboats, including the Arabia and Malta, another boat Hawley has found.

The treasures of the Arabia were once loaned to the Heinz History Center as a traveling exhibit, and officials there would like to include them in a new section dedicated to western river heritage.

Representatives of a handful of Missouri cities have pitched their communities to Hawley as great spots for a new mega museum. He thinks the project could work in any of these places because steamboats played such an integral role in their development.

“This is unique; this is different,” he said. “And I think that with a little imagination, you can have a world-class exhibit that any city, truthfully, will be proud to call their own.”

—Peter Loganbill is a summer intern with Kansas City PBS