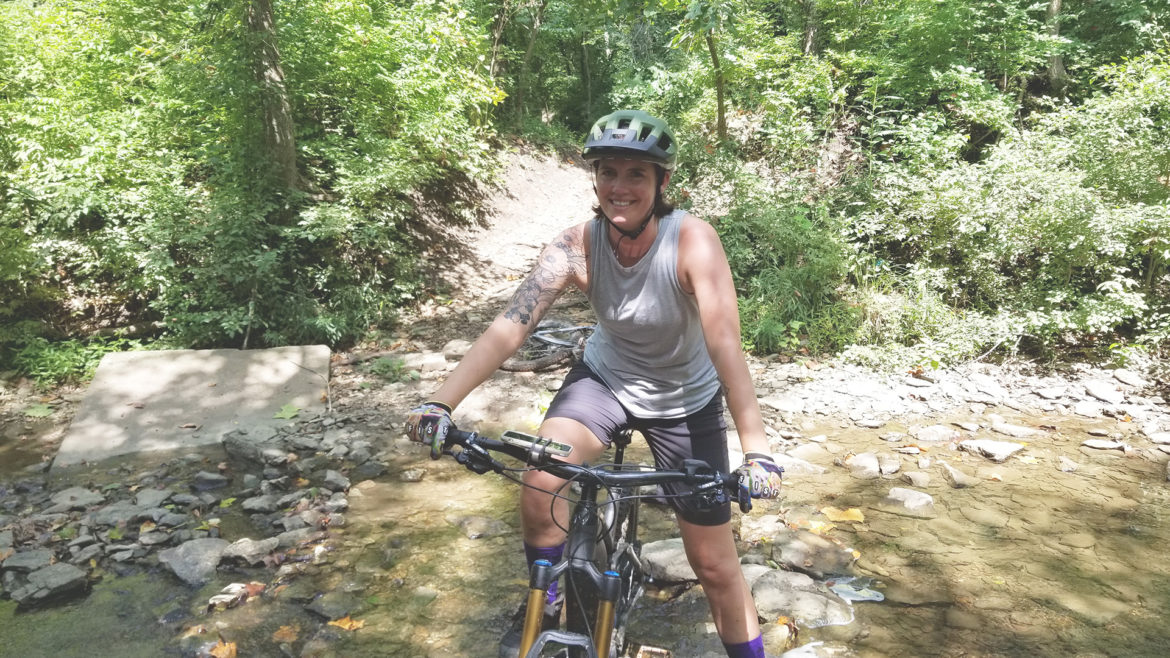 Kansas City’s embrace of green space dates back to the late 1800s, when famed landscape architect George Kessler laid out its system of parks and boulevards.

A century later, in 1991, the local chapter of the American Society of Landscape Architects and Kansas State University drew on Kessler’s inspiration to develop MetroGreen. The report, and an ensuing action plan developed by the Mid-America Regional Council (MARC), envisions more than 1,000 miles of “interconnected landscape corridors” throughout seven counties on both sides of the state line.

Expansion of the trail system along the Blue River is among the plan’s priorities, and that is where south Kansas City, Missouri, resident Sarah Hemme, 36, entered the picture. She lives in the Red Bridge area because of its proximity to mountain bike trails around the Blue River, and she had a question for curiousKC.

She wanted to know which organizations, such as government agencies, nonprofits, or citizens groups, are “most proactive and effective at conserving, protecting, and restoring natural lands and open space” in the Kansas City area.

Hemme knew about the volunteer-driven Urban Trail Co., which takes an eco-friendly approach to building and maintaining more than 100 miles of the rugged trails that Hemme and others enjoy. She also was somewhat familiar with Heartland Conservation Alliance (HCA), a Kansas City-based nonprofit that focuses on preserving land within the Blue River watershed.

He has been at this work for more than three decades, and he no longer feels like he’s pushing a boulder uphill.

At the state level, he said, you have the Missouri Department of Conservation’s (MDC) Burr Oak Woods area in Blue Springs, Missouri, and the Olathe Prairie Center operated by the Kansas Department of Wildlife, Parks, and Tourism.

Jacobs also noted the expansive operations of Jackson County, which manages 21,000 acres of recreation space. And on the Kansas side, Jacobs lauded efforts by Johnson County to preserve more than 1,000 acres of natural prairie.

One minute the footing was there, and then … it wasn’t.

That’s essentially the story of how Flatland Senior Reporter Mike Sherry flipped sideways into a thicket of branches off a muddy, wooded trail. Yes, it got bloody.

Against what Sherry now knows was his better judgement, he accepted an invitation from curiousKC questioner Sarah Hemme to accompany her on a mountain bike ride along the Blue River in south Kansas City, Missouri.

And by the way, they rode in the middle of the afternoon on an August day when the heat index hit 101 degrees.

Meanwhile, Jacobs said, the nonprofit sector is stepping up in a big way. Off the top of his head, he listed just a few of the many efforts, such as The Giving Grove, which addresses hunger and nutrition in the urban core by working with communities to plant orchards.

And as a member of the board, Jacobs has seen the work of Bridging The Gap through its Kansas City WildLands coalition, which preserves native wildlands and relatively undisturbed natural areas. Its efforts include a restoration project along the Blue River corridor not far from Hemme’s house.

Similarly, Deep Roots KC (formerly known as the KC Native Plant Initiative) works to protect habitats for the birds and insects that rely on plants.

Also in the mix are area land trusts like the Heartland Conservation Alliance.

The alliance includes nearly four dozen area partners, including MARC and the many state, local and nonprofit organizations working in the conservation space. It has its headquarters in the Anita B. Gorman Conservation Discovery Center on Troost Avenue.

Part of Hemme’s question reflected her experience with a nonprofit sector that is not always the best at coordinating efforts. Synchronicity continues to be a challenge, Jacobs said, and to a certain extent, this lack of continuity led to the formation of HCA in 2012, said Executive Director Jill Erickson.

The following organizations are good places to start for an overview of conservation efforts in the area:

As Erickson was doing conservation outreach for the state of Missouri, she kept hearing about overlapping Blue River protection plans and initiatives, such as a Blue River alliance that was meeting under the auspices of the Johnson County stormwater office.

Meanwhile, along with MetroGreen, there was something called the Upper Blue River Watershed Implementation Plan. The city of Kansas City, Missouri, too, had green infrastructure initiatives as part of a consent decree it entered into with the federal government to control overflows from its sewer system. And finally, Erickson herself ultimately produced an action plan on the Blue River Conservation Opportunity Area.

So, then, how did curiousKC do for Hemme? We uncovered some things she did not know, and it seemed to her that the conservation alliance is doing as well as anybody at getting groups to work together.

Yet the labyrinth of conservation and preservation organizations in the region remains a mystery to Hemme, who hankers for a clear-cut answer on the most effective efforts.

Preserving native plants and prairie is great, she said, but she is more interested in lasting work that makes natural areas more accessible to the general public. One-day stream cleanups are nice, she said, but the unfortunate reality is that illegal dumping starts again the next day.

It also bothers her that government agencies seem to be offloading some of their work onto nonprofits. At the same time, Hemme said, far be it for her to preach about stream reclamation when Kansas City is struggling with violent crime, poverty and all the challenges of urban education.

Erickson understands where Hemme is coming from. She doesn’t want to come off as some tone-deaf tree hugger.

Yet the reality, Erickson said, is that cities don’t face a tradeoff between addressing societal problems or preserving green space. It is not either-or; it’s and.

Just sit underneath a tree for awhile, Erickson said. It will lower your blood pressure

“It is crucial that human beings have daily, easy access to nature,” she said. “It is how we are wired.”

—Mike Sherry is the senior reporter for Flatland