As Presidential Candidates shout about religious freedom, it’s time for some perspective 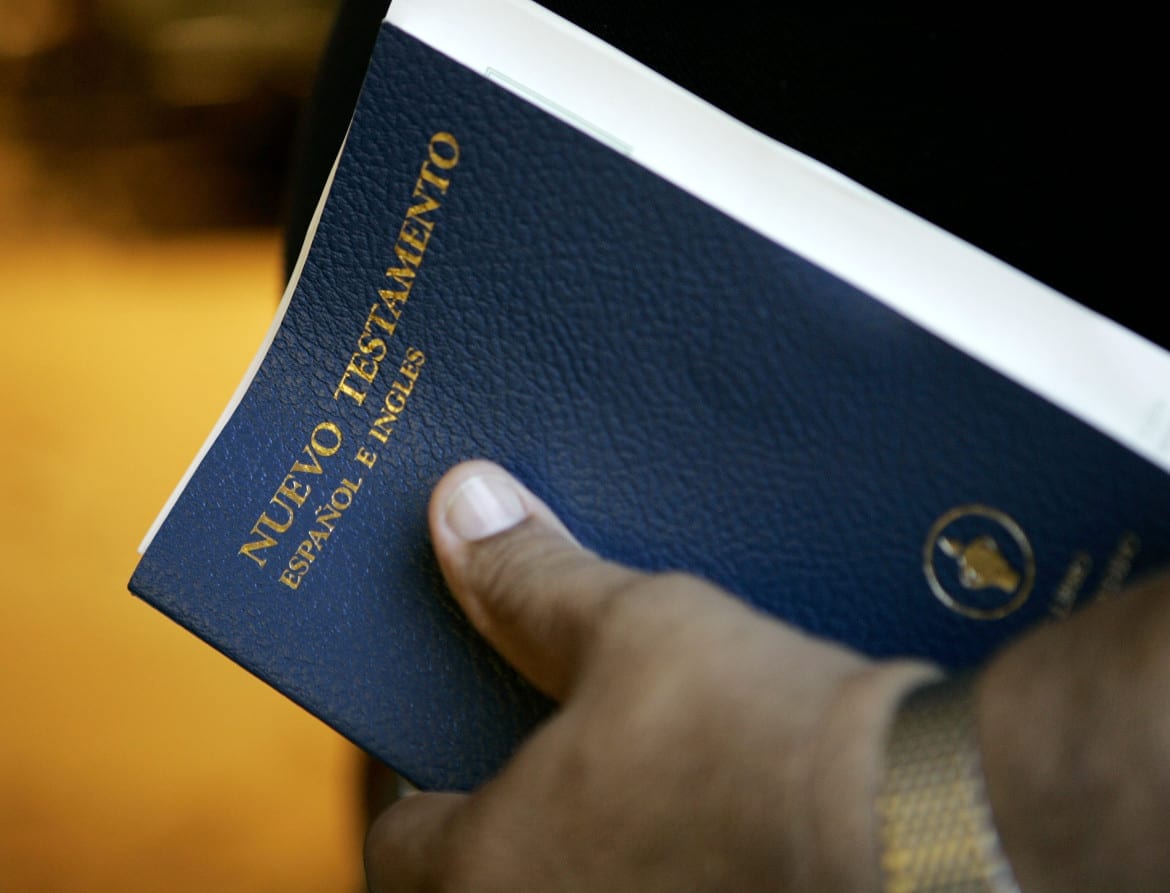 George Diaz holds a bilingual Bible as he attends services in Louisville, Ky. Services at the chapel are delivered in both English and Spanish. (Photo: Ed Reinke |AP)
Share this story

The very day in late February that five Republican candidates for president participated in a smash-mouth debate in Texas with much moaning and gnashing of teeth about the erosion of religious freedom in the United States, these things also happened:

It’s way past time for a little perspective about the religious freedom debate in the United States.

Although there will always be instances of legitimate disagreements about the boundaries of religious freedom guaranteed to Americans by the Constitution, the reality is that the United States is one of the most religiously free nations on Earth, despite those citizens — mostly Christian — who confuse religious freedom with political ideology.

It’s way past time for a little perspective about the religious freedom debate in the United States.

Back when Bill Clinton was president in 1993, various court cases —  having to do with such matters as Native Americans smoking peyote in sacred ceremonies and with eminent domain cases involving church property — came to the public’s attention and revealed the need for some additional protections for religious liberty.

The result was the Religious Freedom Restoration Act, which appeared to be a common-sense approach to rebalance freedom and government power a bit. It passed both houses of Congress almost unanimously.

In 1997, however, the U.S. Supreme Court ruled it unconstitutional, saying it exceeded the enforcement power of Congress. Since then more than 20 states have passed similar laws, though some of them have been obvious ploys to protect bigoted business owners who didn’t want to conduct commerce with gay people — like bakers and florists, asked to provide products for gay weddings. (Indiana’s original 2015 law about all of this is an example, as is proposed legislation in Missouri.)

The religious freedom fight also has seen Catholic authorities and others object to parts of the Affordable Care Act, or Obamacare. And that battle at times has been intense and uncivil.

What many Americans miss in this controversy is that religious liberty flourishes in the United States compared with much of the world. All one needs to do is to read the annual reports of the U.S. State Department and the U.S. Commission on International Religious Freedom.

Read them and weep.

They describe horrific religious repression in dozens of countries — repression often aimed at Christians. The 2015 USCIRF report focuses especially on the so-called Islamic State, often called ISIS, but referred to in this report as ISIL:

“A horrified world has watched the results of what some have aptly called violence masquerading as religious devotion. In both Iraq and Syria, no religious group has been free of ISIL’s depredations in areas it has conquered.

“ISIL has unleashed waves of terror upon Yazidis and Christians, Shi’a and Sunnis, as well as others who have dared to oppose its extremist views. When ISIL last June overtook Mosul, Iraq’s second largest city, it immediately murdered 12 dissenting Sunni clerics, kidnapped Christian priests and nuns, and leveled ancient houses of worship.

“The recent discovery of mass graves underscores the extent of the atrocities ISIL has perpetrated on foes of its reign. More than half a million Mosul residents have fled their homes. When ISIL seized Sinjar, the Yazidis’ ancestral homeland, 200,000 were forced to flee. In Syria, ISIL’s horrors are replicated by those of other religious extremist groups and the Assad government. Yazidis and Christians have borne the worst brunt of the persecution by ISIL and other violent religious extremists.”

“What many Americans miss in this controversy is that religious liberty flourishes in the United States compared with much of the world.”

And this says nothing about religious suppression in Saudi Arabia, North Korea, Pakistan, and many other countries.

But instead of recognizing the generally wide limits to our American religious freedom, we have become a fearful nation, literally arming ourselves against essentially non-existent threats and crying “Wolf!” at the slightest hint that someone has a different view of religion than we do. It’s a doleful state of affairs, unlikely to improve as long as we tolerate leaders who use “Christian” as a political — not a religious — identity. And they are legion.

Bill Tammeus is a Presbyterian elder and columnist who writes the daily “Faith Matters” blog for the Kansas City Star’s website and other publications. His latest book is “Jesus, Pope Francis and a Protestant Walk Into a Bar: Lessons for the Christian Church.” E-mail him at wtammeus@gmail.com.