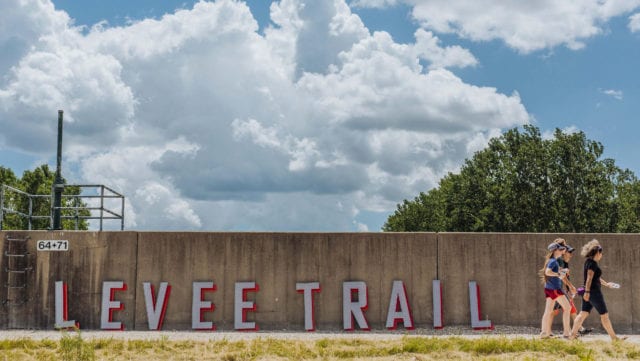 Levee Trail In Kansas City, Kansas, Begins To Take Shape Standing at the meeting point of the Kansas and Missouri rivers, you can still get a glimpse of what Lewis and Clark might have seen when they camped here 212 years ago: vast skies, tall trees, wide, shimmering rivers, even the occasional eagle. Rick Behrens, pastor of Grandview Park Presbyterian Church in Kansas City, Kansas, says the rivers are hidden gems. “It’s really a unique slice of nature in the middle of our cities that’s pretty amazing and a great opportunity for people to get away from the city, in a sense, right in the middle of the city,” Behrens says. Behrens and other cycling and fitness advocates want the community to be able to take advantage of the rivers and surrounding nature. They’re trying to open public access to the levees in Kansas City, Kansas, for cycling, walking and jogging. To do so, however, they’ll have to overcome circumstances that have shaped this part of the city for decades. — Alex Smith is reporter with KCUR, a partner in Heartland Health Monitor, a reporting collaboration that also includes KCPT and KHI News Service, an editorially independent initiative of the Kansas Health Institute. Ag Secretary Vilsack Says Long Past Time For Missouri To Adopt Drug Monitoring Program In 2014, opioid abuse accounted for more than 28,000 deaths in the United States, according to the Centers for Disease Control and Prevention. Missourians accounted for more than 1,000 of those deaths, according to Sen. Roy Blunt of Missouri, and last week a bill negotiated by Blunt and approved by the…...