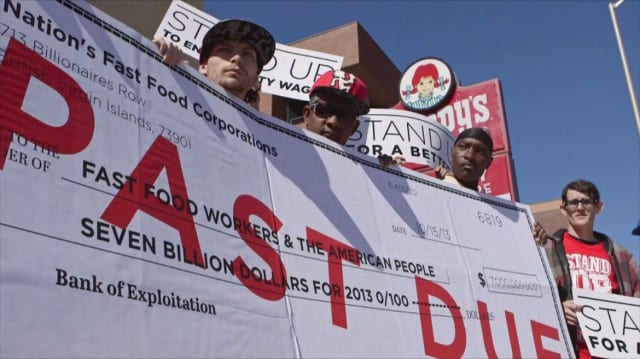 Steve Hebert — KCPT Special Correspondent Fast food workers in the Kansas City, Mo., area took to the street to demand a better wage on July 29, 2013. Armed with megaphones and signs, they stood outside a Burger King restaurant at the corner of Troost Avenue and Emanuel Cleaver II Boulevard demanding “15 and a Union,” the workers’ rally cry for an increased wage of $15 an hour and the right to unionize. This event made Kansas City one of the first of 8 cities in the United States where fast food workers would walk out of their jobs to try and shed light on the low wages they are paid. The workers claim their wages, which for most hover just above the minimum wage, are “poverty wages,” which make it impossible to pay bills and raise a family. Many workers said it was commonplace for workers to use welfare or other forms of the public safety net. They also made the argument that it’s hard to get up the ladder while working full-time and still not earning enough to pay bills. In the Kansas City area, fast food workers called for three different strikes over four days in 2013. During the strikes, workers would drive around to different fast food restaurants where they would enter the establishments and make their demand for better pay. Dozens of workers flooded into the lobbies of the restaurants, waved signs and used megaphones to make their demands known to patrons and management. Many times the workers making the “demands” were employees of the…...