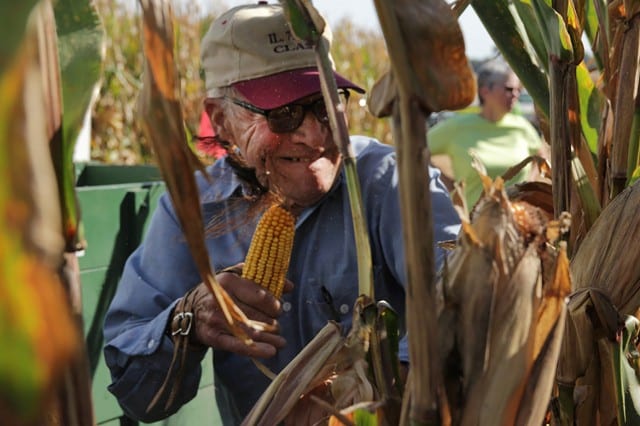 Dick Humes squinted and sweat as he moved down a row of corn. He sliced through the husk with a metal hook in his right hand, snapped the ear from its stalk with his left and threw it over his shoulder into a wagon rolling alongside him. Every other second, the corn hit the floor of the wagon with a thud. Humes was setting a steady pace for the men’s 50-and-older division at the 34th annual Illinois State Corn Husking Competition. While farmers across the Midwest harvest billions of bushels of corn using giant machines called combines, the competitors at this contest opted for a more primitive technology: their hands. The contest, held in late September at a cornfield in the rural western Illinois town of Roseville, is a race against the clock. The goal is simple: Pick as much corn in 20 minutes as possible. The contestant with the wagonload of corn that weighs the most at the end of the allotted time, wins. The races were divided into heats, like a swim meet. Men competed against men their age. Women against women. And there was a 2-minute- long pee-wee contest for the kids. At the end of his heat, Humes hopped into the wagon with his pile of corn and rode around to the weigh station on the other side of the field. In 20 minutes, he had picked 322 pounds of corn, putting him in first place. Humes will go on to compete against the winners of contests in nine other Midwestern states at the national corn…...